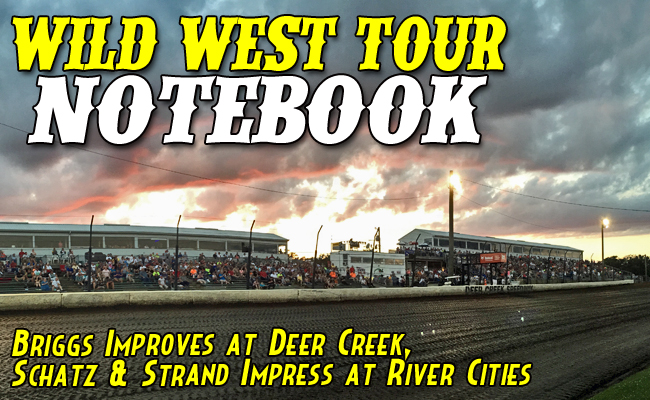 SPRING VALLEY, Minn. – July 18, 2015 – It’s not often that having to unload a backup car during a race night ends up benefitting a racer, but it proved to be just what Boom Briggs needed to score his first top-five World of Outlaws Late Model Series finish of the season during Saturday night’s NAPA Auto Parts Gopher 50 at Deer Creek Speedway in Spring Valley, Minn.

Forced to unload his backup Longhorn Chassis after his primary machine suffered mechanical woes during hot laps, Briggs, 43, of Bear Lake, Pa., responded by qualifying sixth and finishing second in his heat race. After redrawing the pole starting spot for the 50-lap main event, Briggs controlled the first half of the race before a lap-33 caution set the stage for Darrell Lanigan of Union, Ky., to make a winning pass on lap 38.

Briggs eventually faded back to fourth at the finish of the race, which served as the final round of the WoO LMS Wild West Tour, but for a driver who has struggled to find consistency during his sophomore WoO LMS campaign, the solid performance on a night that began with a setback was considered a success.

“For everything that happened tonight, from unloading the backup car, then no hot laps, to running fourth in the feature, I’m ecstatic,” said Briggs, who before Saturday’s event hadn’t led any A-Main laps during his two seasons of full-time WoO LMS competition. “I’m disappointed a little, but extremely happy at the same time.

“To lead that many laps and end up fourth, yeah, it kinda sucks. But for me right now, a top 10 is a good finish and a top five is a win, so I’m happy with it.”

While the solid night may have been unexpected considering the circumstances, Briggs wasn’t surprised at all that his backup car ran so well. It’s actually newer than the car in which he stared the night, and was only being used as a backup so it could be saved for major WoO LMS races on the horizon – events such as Fairbury (Ill.) American Legion Speedway’s $26,000-to-win Prairie Dirt Classic presented by Bank of Pontiac July 24-25 and the $50,000-to-win USA Nationals at Cedar Lake Speedway in New Richmond, Wis., July 30-Aug. 1.

“The primary car tonight was our original Longhorn,” Briggs said. “It’s the older of the two, but it’s still a good car. The backup car is a newer car that I was saving for Fairbury and Cedar Lake. We just unloaded it standard tonight and it turned out really fast.

“I’m pretty happy with both cars. Really, for the first time ever, I’ve got two cars that it doesn’t matter which one I get in, I comfortable in both of them.”

Briggs has good reason to want to save his best equipment for Fairbury and Cedar Lake. The two big-money events mark two of the biggest races of the season and both will draw two of the year’s toughest fields of competitors. Last season, Briggs struggled at both races and didn’t make either A-Main. He hopes to avoid that this season.

“After not making either race last year, that was my goal coming out here,” Briggs said. “I want to make Fairbury and I want to make Cedar Lake. I’m so deep in points, there’s probably no provisional for me, so I know we have to be on top of our game. But I feel good because I know we’re running better and tonight proves it.”

Regardless of his results at Fairbury and Cedar Lake, Briggs is happy with his performance on the WoO LMS, especially considering the obstacles he faces as a racer with another job besides racing – he helps manage his family’s Briggs Transportation company when not on the road – and the fact that he and teammate Chub Frank operate as a two-car team with just one full-time crew member between them.

Even with the disadvantages they face, Briggs and Frank are both competitive on tour, as shown in Saturday’s race with Briggs’ fourth-place effort and Frank’s runner-up finish.

“It’s a long stretch to think I can win one of these races considering everything against us,” Briggs said. “We’re the only two-car team out here with one crew guy – Shane Winans, who works his butt off for us. So it makes us feel good when we have a night like tonight where we’re both up front like this.”

Schatz Contends at River Cities (in a Late Model)

When Donny Schatz is in contention late in race, he’s usually confident in his chances of making a winning pass. But usually, Schatz is in a Sprint Car and not a Late Model.

But instead of becoming the first driver ever with victories on both the WoO Sprint Car Series and the WoO LMS, a couple of mistakes dropped Schatz to third behind three-time WoO LMS champion and fellow Rocket Chassis driver Josh Richards of Shinnston, W.Va., at the finish.

“I always thought it would be far-fetched for me to win one of these races, but I was right there and had an opportunity,” said Schatz, who has dabbled in Late Models over the past few seasons during his time off from Sprint Car action. “If I had done the right things and made the right choices I was gonna be able to race Timmy. I think I just overdid it and pushed too hard. I slid the tires one too many times and allowed for Josh to capitalize.”

While he may have fallen short of what would have been a historical victory, Schatz was the nonetheless happy with his effort. And he did at least make history by giving the River Cities crowd the rare chance to watch points leaders from separate World of Outlaws tours racing against each other. He finished second to WoO LMS points leader Shane Clanton in a heat race and later passed him multiple times in the A-Main.

“It was pretty cool racing with Shane Clanton just because he’s won a lot of races this year,” Schatz said. “We got to racing and must have passed each other three of four times. He never hit me and I never hit him, but I know there couldn’t have been a hair between us. That’s what I love. That’s just so cool to me to be able to race like that.

“The way a Late Model moves around on the racetrack is so different than what I’m used to. The visibility of where you’re at in this thing and where your right-rear corner’s at is so much farther. I’m trying to overcome that. I did get into Chub (Frank) a little bit, and I didn’t even see him. But that’s all part of it. You make mistakes, ever guy out here does.

“I have a lot of respect for these other guys who can race like that. I try to be respectful of those guys too. But I’m here to race too, and if you show me a guy that gives an inch and I’ll show you someone I can beat. And I’m sure they feel the same way. That’s racing, and that’s what makes it great.”

Dustin Strand lived a dream when he won his heat race during the Wild West Tour stop at River Cities on July 10. The 26-year-old Grand Forks, N.D., racer nearly lived what had previously only been fantasy during the main event later that night.

Starting third in the 50-lap race, Strand, a regular in River Cities’ Wissota Late Model division, ran among the leaders for most of the race, even leading laps 15-17, before a flat tire dropped him to a 20th-place finish.

“Just winning that heat race was a dream come true for me,” said Strand, whose impressive performance came in a Longhorn Chassis powered by a Wissota spec engine. “When we got in a heat with McCreadie and Junghans and Jimmy Mars, I was really just hoping to get in the feature. To go out there and make a pass for the lead and win a World of Outlaws heat race, that was awesome.

“Then in the feature, we’re running third behind Clanton and Chub, and I just couldn’t believe it. Then to actually pass those guys and take the lead, it’s just amazing to me. I never would’ve even dreamed that was possible.”

Strand purchased the entire set prior to the start of the program and ran three of the tires all night. The only tire he ran in the feature that was one of the four purchased from Clanton was the left rear, which, ironically, was the tire that cost him a top-five finish.

“I came here today and went and asked Shane Clanton if he had any used tires. He unbolted all the tires from last night that he was gonna throw away and I bought them from him – a whole set for $40,” Stand said. “That’s what we ran all night other than a new left-rear we ran in the feature. I guess it’s kind of amazing that those three held up and the new was the one that went flat. I guess I should’ve maybe stuck with the used ones all the way around.”

Big Races on the Horizon

With the Wild West Tour complete, WoO LMS competitors turn their attention to another busy racing trip that features seven nights of action over a 10-day stretch.

From Quincy, the WoO LMS travels across the Land of Lincoln to Fairbury (Ill.) American Legion Speedway for one of the year’s most anticipated events. The 26th annual Prairie Dirt Classic presented by Bank of Pontiac will again feature two nights of WoO LMS action at the popular quarter-mile oval with PDC qualifying and heat races on Fri., July 25, as well as the inaugural #FALS Draw Showdown, a $5,000-to-win, 25-lap shootout. Visit www.fairburyspeedway.com for more info. Sat., July 26 will feature PDC Last-Chance Showdowns and the $26,000-to-win Prairie Dirt Classic finale.

On Tues., July 28, the WoO LMS makes a stop at Shawano (Wis.) Speedway for the Sun Drop Shootout. The mid-week event features another full slate of WoO LMS action at the half-mile fairgrounds oval. More information is available at www.shawanocountyfair.net.