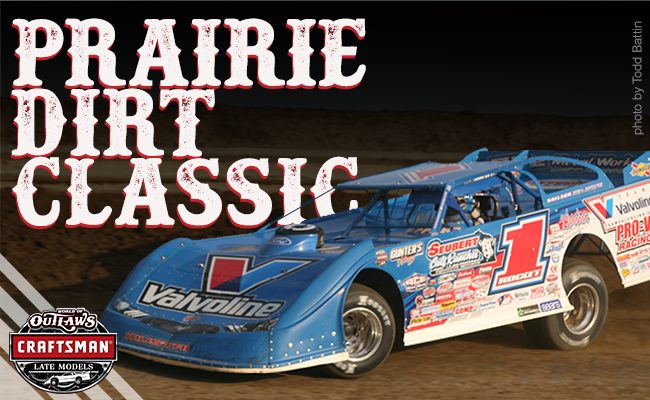 CONCORD, NC— July 4, 2017— The Prairie Dirt Classic is one of the most anticipated Dirt Late Model events of the season. Not only does the track produce great racing from start to finish (named the Dirt on Dirt Race of the Year 2013, 2014, 2015), the atmosphere at Fairbury American Legion Speedway for this event is unparalleled.

In 2013, the World of Outlaws Craftsman Late Model Series partnered with Fairbury American Legion Speedway to boost the notable event to the next level by bringing the best Late Model drivers in the country to the Fairbury, IL stage.
One year prior,  Brandon Sheppard sat behind the wheel of the Rocket 1 for Mark Richards Racing Incorporated at Fairbury American Legion Speedway for the DIRTcar Summer Nationals tour; his last time at that track in the Rocket Chassis House Car.
This season, Sheppard, paired with the Rocket 1 Racing team, has been nearly unstoppable. Remarkably, 61 percent of the time he hits the track with the Series Sheppard finds his way to the podium; with 13 top-three finishes of 21 Series races.
“It’s quite a bit different this year headed in to Fairbury compared to then,” said Sheppard. “We can take this car wherever we need to in the country and be competitive. I’m also a lot more experienced than I was then, and have a lot more laps at that track now, and that’s going to help a lot.”
Sheppard has found success a handful of times at the quarter-mile semi-banked dirt oval, including a Summer Nationals win in 2016.
“The racing is really good,” said Sheppard. “It’s always two- and three-wide racing every time we go there – especially for the Prairie Dirt Classic. Those guys at Fairbury definitely have the track figured out. And the atmosphere there is crazy every time we go. It seems like everyone mobs out of the stands once the show is over and heads to the pit area. There is tons and tons of people in the pit area after the races. It’s pretty cool to see.”
The World of Outlaws Craftsman Late Model Series will invade Fairbury American Legion Speedway on July 28-29. To buy tickets for the 28th annual Prairie Dirt Classic click here.