Screven Motor Speedway Opens the Door to a Milestone Season 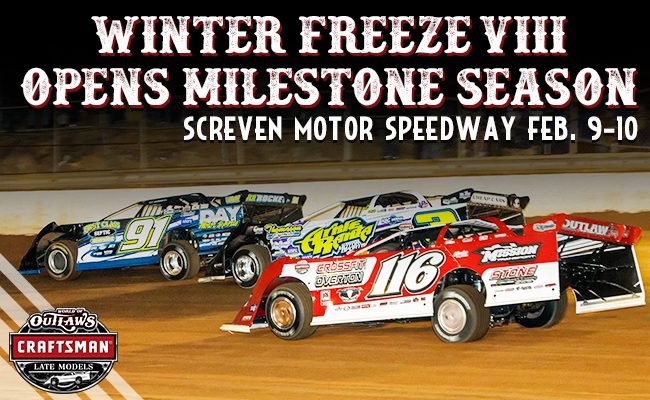 CONCORD, NC­­– Jan. 12, 2018– In less than 30 days the World of Outlaws Craftsman® Late Model Series will embark on its 30th commemorative anniversary season at Screven Motor Speedway. This milestone year not only allows the Series to celebrate its storied past, but highlights the importance of the drivers, teams, and officials who will continue to carry the sport forward for generations to come.

“This is an exciting time for the World of Outlaws Craftsman Late Model Series as this is probably one of the most anticipated seasons in a long time with the amount of drivers we have, but also because of the caliber of our officials,” said Series Director Matt Curl.  “We are going to be at Screven with our A-game, and I think all of our drivers will be as well. From an official’s stand-point we are jumping out of the building with anticipation and excitement for the upcoming 2018 season.”

In 2018, World of Outlaws Craftsman Late Model Series Director Matt Curl leads a resolute and energic group of officials who have bolstered the sport for years in numerous ways. This group of officials includes Series Announcer Rick Eshelman, Race Director Erik Grigsby, Technical Director Kenny Kenneda, Safety Director Tyler Bachman, and Timing and Scoring Specalist Jeff Olson. This relatively young yet very passionate team of officials have earned the respect of all involved, alongside the tried and true of the Series.

For the fourth year in a row, the season launches into full swing at Screven Motor Speedway in Sylvania, GA for Winter Freeze VIII. A practice session on Thursday, Feb. 8 allows drivers the opportunity to ease back into action after a three-month break from Series competition. Following practice night, two nights of racing will include a 40-lap, $8,000-to-win event on Friday, Feb. 9 and a 50-lap, $10,000-to-win event on Saturday, Feb. 10.

Two drivers with a history of early season success are Series veterans Rick Eckert and Shane Clanton. For the past two seasons Eckert has captured a victory at the season opener, whereas Clanton holds three Winter Freeze wins at the 3/8-mile Georgia clay oval since 2013.

The seasoned drivers will look to repeat their victories, but it won’t be an easy task with challenges from other World of Outlaws championship hopefuls, Rookie of the Year contenders and a host of other national stars, regional standouts and weekend warriors eager to capture an early season win.

Brandon Overton and his Randy Weaver “Dream Team” are optimistic that they can begin the season just as strong as anyone. The driver from Evans, GA cut his teeth in racing at Screven Motor Speedway, calling it “one of his favorite tracks in the country.” Not only does the track hold significance to Overton for its part in the early years of his racing career, he is also very consistent at the 3/8-mile clay oval. In the past three Winter Freeze events, Overton has placed in the top-five in five of the six races, including three podium finishes.

“I’ve never really been a points racer. All I think about is going and winning, and so that will probably be our strategy every night,” said Overton. “The way things are nowadays, it’s all about momentum. You start clicking off wins and running up front, and it kind of just carries over to the next weekend.”

Reigning Series Champion Brandon Sheppard will also enter the season hungry for an early win. At the annual awards banquet in November, Sheppard reflected on the patchy start that he and his new Rocket 1 Racing team had in 2017, almost to the point of throwing in the towel the first week of the season.

“The first night at Volusia, we had just a little conflict. I thought we needed to change something on the car. Mark thought it was me. It was just the heat of the moment,” explained Sheppard. “We were dang near ready to load up and call it a night after the heat race, and we ended up running the Last Chance Showdown. We finished out the night, and we were hooting and hollering, throwing stuff and everything else. Right then and there I knew that my crew had my back. I didn’t know any of them that well until we left Florida.”

Quickly overcoming the hardship, Sheppard scored his first World of Outlaws win on March 24 at Whynot Motor Speedway. From there, the wins never stopped coming as he was able to capture 17 more, tying Josh Richards’ single-season wins record set in 2016. Following last season’s dominance, Sheppard will be on the prowl to establish a new single-season wins record in 2018.

Tickets for Winter Freeze VII will be available on the day of the event (Feb. 9-10) at the ticket booth. Tickets for DIRTcar Nationals (Feb. 6-17) are available now online and by phone at 844-DIRT-TIX. For more information on the World of Outlaws Craftsman Late Model Series’ upcoming season please visit woolms.com or our follow us on Twitter and Facebook.