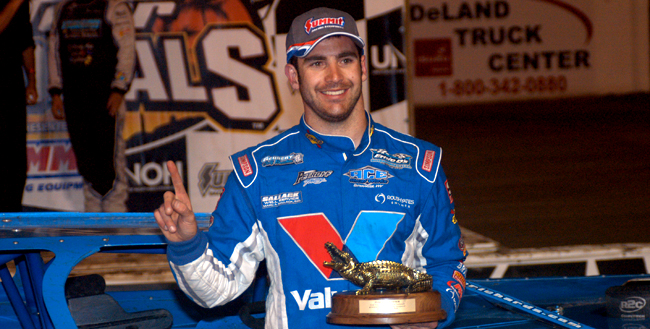 BARBERVILLE, FL – Feb. 19, 2013 – There appears to be no stopping Josh Richards during the 42nd UNOH DIRTcar Nationals Presented by Summit Racing Equipment.

With another spectacular charge forward – this time from the 11th starting spot – Richards captured Tuesday night’s 30-lap DIRTcar UMP Super Late Model feature for his second victory in as many evenings at Volusia Speedway Park.

Richards, 24, of Shinnston, W.Va., powered his Valvoline-sponsored Rocket Chassis house car to second place on lap 16, putting himself in position to inherit the lead when Don O’Neal of Martinsville, Ind., pulled to the infield with mechanical trouble during a lap-19 caution period. The two-time World of Outlaws Late Model Series champion dominated the remainder of the distance to pocket a $7,000 top prize.

WoO LMS Rookie of the Year contender Eric Wells of Hazard, Ky., grabbed second from his chassis builder, Scott Bloomquist of Mooresburg, Tenn., on lap 20 and stayed there to the finish. The 24-year-old, who sat out Monday night’s DIRTcar UMP Late Model opener, crossed the finish line 2.709 seconds behind Richards to cap a career-best performance at the half-mile oval.

Stormy Scott, 23, of Las Cruces, N.M., placed third in the Bryan Rowland Motorsports Team Zero by Bloomquist car, cracking the podium in just his second week of dirt Late Model racing. A standout in the open-wheel Modified division who is transitioning to dirt Late Model racing this season, Scott, who started 13th, overtook Bloomquist for the show position on lap 22.

Billy Moyer of Batesville, Ark., also passed Bloomquist late in the distance, grabbing fourth on lap 25 and finishing there in his Victory Circle machine. Bloomquist, who started from the outside pole, faded to a fifth-place run in his self-built car.

In a competitive race that featured four different leaders, Richards proved to be the last man standing up front for the second consecutive night at Volusia. But his march to the lead wasn’t quite as smooth as on Monday evening, when he sailed around the outside of the track in advancing from the 10th starting spot to the lead in 18 circuits.

Richards actually surprised himself with his quick ascension through the field. He cracked the top five in three laps and reached second by lap nine, though he swapped the runner-up spot once with Darrell Lanigan of Union, Ky., before gaining control on lap 16.

“I knew everybody gambled on tires a little bit,” said Richards. “We just went with a softer compound and tried to stay slow and not wear anything out, and try to get one at a time as we could. I didn’t expect to get up through there like we did, but I think everybody just kind of got bound up and slid and we were able to get quite a few cars early.”

Richards’s move to grab second from Lanigan on lap 16 might have been the critical point of the race. After Richards dived to the inside of turns three and four and slid in front of Lanigan, contact between the two friendly rivals in turn four damaged the nosepiece of Lanigan’s car. Three laps later Lanigan skated into the turn-three guardrail due to a left-front tire that was cut by his bent bodywork, bringing out the race’s only caution flag.

“I think there was a little bit of heat over that. I don’t think he knew exactly what happened. I think he just thought I drove in there after he turned, but we were just racing. It’s unfortunate that he got a car tore up, but I don’t feel like we did anything wrong.”

Lanigan, who started from the pole position and led the first circuit and laps 6-10, limped into the infield and retired after the caution flag flew on lap 19. He declined to comment on the situation with Richards.

Moments after Lanigan left the track, O’Neal, who started fifth and passed Lanigan for the lead on lap 11, also drove into the infield. A line of moisture began to trail behind his Larry Moring-owned car during the caution period; it was later determined to be fuel from a busted fuel pump.

“It’s unfortunate that O’Neal broke,” said Richards, who led laps 20-30 without receiving a single challenge. “I feel like we could’ve gotten him anyway, but everything’s been going our way. We’ll take it.”

Richards’s victory was his third in as many days – he started the streak with a $20,000-plus triumph in Sunday’s 75-lap WoO LMS event at Bubba Raceway Park in Ocala, Fla. – and the seventh of his career during the UNOH DIRTcar Nationals by Summit at Volusia. He moved into a tie for fourth on the alltime DIRTcar Nationals win list with veterans O’Neal, Bloomquist and Rick Eckert of York, Pa.

The A-Main’s other leader was Tim McCreadie of Watertown, N.Y., who surged forward from the fourth starting spot to pass Lanigan for the top spot on lap two. McCreadie was in front on lap five when he jumped the cushion in turn two and slapped the outside wall, inflicting damage to his Warrior machine that forced him to cede the lead to Lanigan on lap six and pull off that circuit.

Forty-seven cars were entered in the program, which utilized group qualifying to set the starting lineups for six heat races.

The DIRTcar Nationals Presented by Summit continues on Wednesday night (Feb. 20) with the 40-lap UMP Late Model finale that offers a $10,000 top prize. The Super DIRTcar Series for Big-Block Modifieds will also be on hand for the division’s first of four straight race nights. Race time is 7:30 p.m. on Wednesday.

Another 30-lap A-Main paying $7,000 to win is on tap this evening. Fans can watch all the action live by purchasing a DIRTcar Nationals video subscription at www.DIRTVision.com.

Richards inherited the lead during a lap-19 caution period when Don O’Neal retired to the infield due to a leak that developed in his Moring Motorsports machine, but he worked hard to get in position to capitalize on O’Neal’s misfortune. He reached second place on lap 16 when he slid by Darrell Lanigan, whose nosepiece ended up crushed by contact with Richards’s rearend during the exchange. Lanigan slid into the turn-three wall on lap 19 to bring out the race’s only caution flag — and set up Richards’s ascension to the lead moments later.

The wildly competitive race featured four lead changes among four drivers. Lanigan led lap one; Tim McCreadie paced laps 2-5 before relinquishing the spot when he slapped the turn-two wall and pulled off with damage; Lanigan regained command for laps 6-10; and O’Neal paced laps 11-19.

9:45 p.m. – Anticipation is building for the 30-lap A-Main, which will see Darrell Lanigan start from the pole position and Scott Bloomquist take the green flag from the outside pole.

Interestingly, the winner and second-place finisher in last night’s A-Main, Josh Richards and Steve Francis, will start side-by-side in the sixth row.

B-Main results are below….

8:40 p.m. – Jason McBride slid through the cushion between turns one and two and ended up with the right side of his car on the guardrail on lap three of the first heat, necessitating a caution flag. It appeared he would have to be towed off, but he drove away and continued racing after safety crews pulled his machine off the wall… Clint Smith’s run in the second heat came to a quick end because he ran out of helmet tearoffs, leaving him unable to see clearly through his mud-caked shield. Smith had a Go-Pro camera inside his cockpit for the heat, so his very muddy run was captured for posterity. You’ll want to check the World of Outlaws Facebook page in a few hours to watch the uploaded video… Good outing for youngsters Mason Zeigler, 20, and Bobby Pierce, 16, who finished one-two in the third heat. Their combined ages fall far short of the third-place finisher in the event, 50-year-old dirt Late Model legend Donnie Moran… Seven of the 10 WoO LMS regulars made the cut through a heat, leaving only Smith, Chub Frank and Brandon Sheppard to run B-Mains. Darrell Lanigan, Tim Fuller and Morgan Bagley swept the transfer spots in the fourth heat and Tim McCreadie, Josh Richards and Bub McCool did the same in the fifth heat…

The first of the three 20-lap, 14-car UMP Modified features is now rolling onto the track. The three UMP Late Model B-Mains will follow the checkered flag of the UMP Modified event.

Results of heats 4-6 are below:

The final three prelims will be contested after the DIRTcar Northeast Big-Block Modifieds — with a strong 36-car field on hand — get their first practice laps of the week. The Big-Blockers will race in 30-lap features on Wednesday, Thursday and Friday and a 50-lap finale on Saturday.

Tim Fuller will represent the Late Model division in this week’s Big-Block Modified action. The driver who starred in the open-wheel division before becoming a full-fender regular will shake down the J&S Racing No. 74 Modified he runs in selected events.

Results from the first three heat races are below…

Mrs. Eckert and her husband, Junior, have been UNOH DIRTcar Nationals by Summit fixtures for years, annually trekking south with other family members to watch their son in action. Health problems, however, prevented her from making the trip this year and assuming her usual position in Volusia’s frontstretch grandstand, so Rick decided to skip this week’s DIRTcar UMP-sanctioned events to visit with her.

Eckert’s hauler and crew remain in Florida and he plans to fly back on Thursday to compete in the three WoO LMS events that close the UNOH DIRTcar Nationals by Summit. He sits fourth in the tour points standings after five events.

6:30 p.m. – Hot laps/group qualifying for the six groups of DIRTcar UMP Late Models have begun. Drivers will qualify among only the competitors they will race against in their heats.

6:05 p.m. – Finally, after several days of unseasonably cool — sometimes even frigid — conditions at Volusia Speedway, the weather has turned much more to everyone’s liking. Temperatures have risen into the upper 70s and the sun has been shining all day, providing a boost of adrenalin to all at the UNOH DIRTcar Nationals by Summit.

Forty-seven Super Late Models are signed in for tonight’s DIRTcar UMP-sanctioned card, which will begin in a few minutes with hot laps. The program will also include the week’s UMP Modified finale featuring three 20-lap feature races, with the drivers divided into events by their standings in the points.