READY TO RACE: Rookie of the Year Eager to Get Back on Track 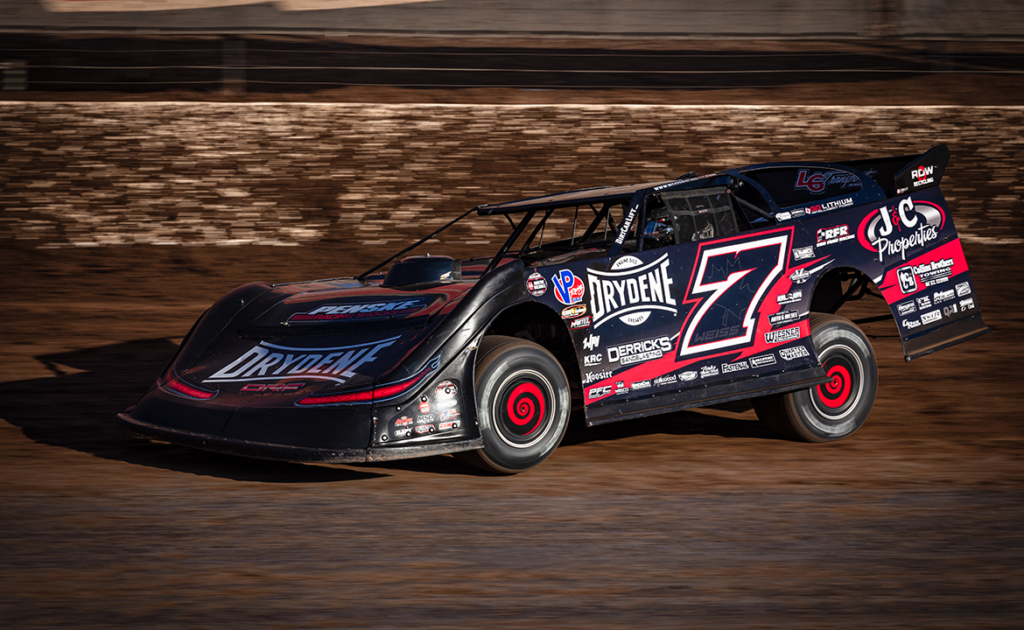 CONCORD, NC – May 8, 2020 – Ask any driver, crew member or official in the pit area and they’ll likely tell you Ricky Weiss is one of the most focused and poised drivers around. The 31-year-old Canadian Dirt Late Model sensation burst onto the World of Outlaws Morton Buildings Late Model tour last year and finished in the top three 13 times without winning. In 2020, he came back, and didn’t have to wait long for his first win.

Less than two months after being presented with the 2019 Rookie of the Year Award on the back of the most statistically stout rookie season in Series history, Weiss acquired a sponsorship deal with Drydene Performance Products and took his new black-and-red Team Zero Race Car to World of Outlaws Victory Lane in a thriller during the Series’ opening weekend in January at Vado Speedway Park.

Catch this very race — the inaugural “Battle at the Border” from January — in this Saturday’s DIRTVision Watch Party presented by Morton Buildings, and stay tuned for special guest commentary by Weiss and Vado Speedway Park Announcer, Ruben Mireles. The Outlaws’ visit to Knoxville Raceway in 2007 will also be shown, featuring special guests and former World of Outlaws champs Darrell Lanigan and Rick Eckert.

Weiss, of Headingley, MB, had to pass fellow Chris Madden for the lead early on the 30-lap contest and then fend off charges from defending Series champion Brandon Sheppard, all with heavy lapped traffic in the way. Looking back on that night, Weiss attributes a big part of the win to consistency and a cool head in the seat.

“Last year we had so many close calls… I don’t really get over-excited. Not to say I don’t make mistakes, but I try to be the same every lap, try not to do anything wrong. My car was better at the end. I just tried to hit my marks, and if they were gonna get around me, then they definitely earned it,” Weiss said.

Weiss began the journey to his first Outlaws checkered flag from inside of row two after a victory in Drydene Heat #3. Weiss grabbed the runner-up spot immediately and began to close in on Madden, using his preferred low groove. Stalking his prey for several laps as the two worked through lapped traffic, Weiss finally made his move underneath Madden for the lead on a clear track after a restart.

“I knew I was better than Madden early. I try to race him as clean as I can, and he got the jump early. Nine times out of 10, it’s easier being in second when you can kind of judge on where your car’s better,” Weiss said.

“Once I got by Madden, it was like ‘okay, as long as I can hold this bottom, I think we’re gonna be alright.’”

And he was alright. Weiss drove it all the way back home for his first big check of the season and a ton of notoriety for finally getting the monkey off his back.

Even when some frustration set in after so many bridesmaid and top-five finishes last year, Weiss never gave up. He knew his struggles would force him to up his game until he beat those who had beaten him.

“There’s a lot of talent that you’re racing with, night-in and night-out, and it really makes you better as a driver,” Weiss said. “I’ve said it so many times – you’re only as good as the drivers you race with. So, when we decided to run with the tour, it was ‘let’s go run with the best of ‘em and see what we can do.’ We’ve been fortunate enough to be competitive at each event.”

Now, after a two-month hiatus from all racing activity, Weiss & Co. are scheduled to be back on the track in next weekend’s #RETURNtoRACING event at Federated Auto Parts Raceway at I-55. Weiss has never been to the 1/3-mile oval in Pevely, MO, as was the scenario for most of the tracks he visited last season, but he’s been doing his homework lately.

“I watched some video of Pevely the other day and that place looks really racy,” Weiss said. “There were times where the top was better, but it was just a fine line. Sheppard would drive by them all and then Moran would come back on the bottom and just hit his marks and then he was better a few laps.

“That kinda excites me, because I know my car works really well on the bottom on dry, slick, smooth tracks. Hopefully, they can get the surface exactly like that.”

Weiss is referring to the incredible fight to the finish between Sheppard and 2017 Rookie of the Year Devin Moran in the Outlaws’ most recent visit to I-55. While Weiss may not have the track experience in his corner, he certainly does have a few good friends to lean on.

“This year, we get to run with Madden and Scott [Bloomquist], who will be really competitive. I’m sure they’ve ran there a few times, so we’ll bang some notes off them a little bit and hopefully we can kinda start the season all over again,” Weiss said.

Just like every other driver across the country, Weiss has had enough of a break and is ready to get back out on the road and attack the track. But after many years of racing north of the border, Weiss says this actually feels somewhat normal because of the colder weather up north.

“It kinda brings back the past a little bit,” Weiss said. “That’s really how my season used to go back in the day. We used to race all summer long, and then we’d have a short offseason and we’d go out to Arizona and then over to Speedweeks in Florida. Then we’d come back home and kinda regroup again, wait for the snow to melt and then start all over again.

“That’s honestly what this feels like. It doesn’t feel like worldwide pandemic. We’re just regrouping, trying to get all of our ducks in a row and be as organized as we can get because I know when they pull the trigger, it’s gonna be wide open from there.”