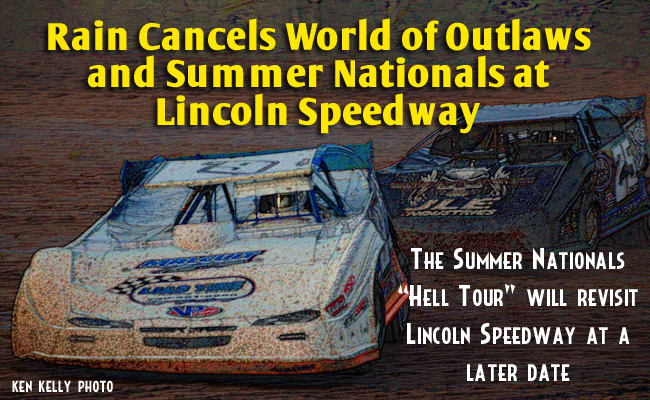 LINCOLN, Ill. – July 3, 2016 – A certainty of rain throughout the day with the potential of flooding Central Illinois forced the cancellation of Sunday’s “World of Outlaws/ Hell Tour” Shootout presented by Graue Chevrolet at Lincoln Speedway in Lincoln, Ill.

This was going to be the first time in history the World of Outlaws Craftsman Late Models® and DIRTcar Summer Nationals Late Models stood tire-to-tire against each other, all competing for the $10,000 purse. The DIRTcar Summit Racing Equipment Modified Nationals were set to be the supporting class in a night to go down in history,

”Fans would have stayed on their feet for this one,” World of Outlaws Series Director Tim Christman said. “We had an impressive lineup for this event, and we were excited to put on a great show for the fans. Unfortunately, the weather just had other plans.”

Though the World of Outlaws will not be returning to Lincoln in 2016, a makeup date has been scheduled for Thursday, August 25 for the Summer Nationals squad. It will be a $5,000-to-win show; more details about the special event will be announced at a later date.

”With the weather forecast, we knew we were in trouble,” DIRTcar UMP Series Director Sam Driggers said. “We started looking at other options. More information will be released soon.”

The World of Outlaws Craftsman® Late Model Series will travel to Iowa to serve-up a two-day special of races at Hamilton County Speedway on Thursday, July 7 and Mason City Speedway on Friday, July 8.

General Admission tickets for each show are $25 in advance or $30 at the gate. Pit passes are $40. Visit hamiltoncospeedway.com and masoncitymotorspeedway.com for more information.