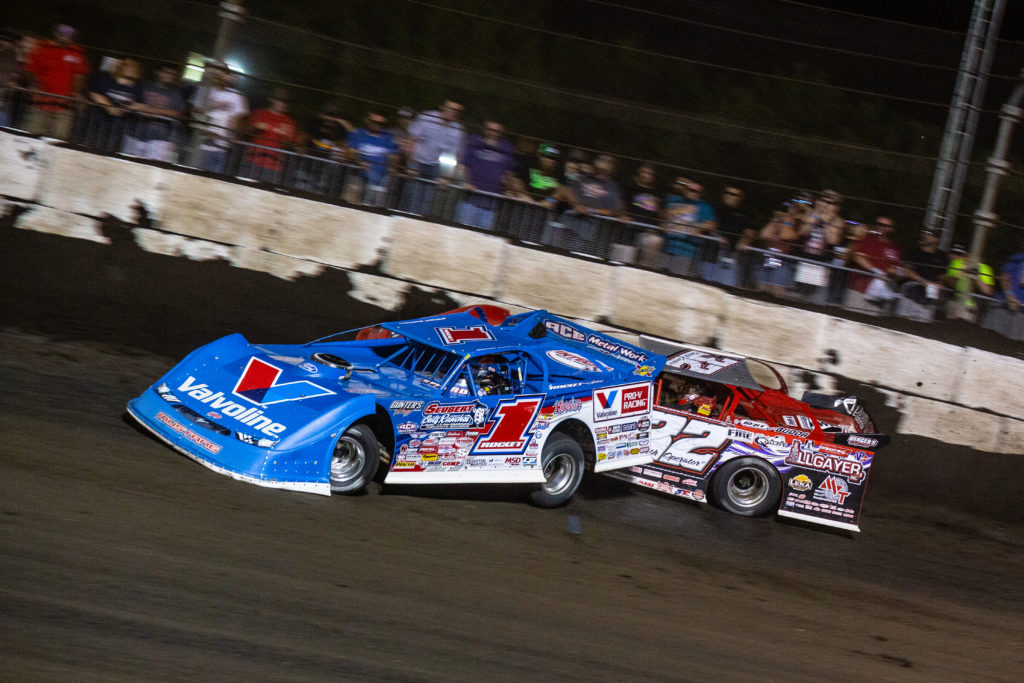 Only 90 of the most prolific drivers have attached a World of Outlaws Morton Buildings Late Model Series feature win to their resume.

Behind them is 28 of their counterparts who reached their peak with a second-place finish.

Nobody has been closer on more occasions than York Haven, Pennsylvania’s Jason Covert, a four-time World of Outlaws runner-up with such results more than a decade apart. His first close call came on June 2, 2007 when he trailed Shannon Babb to the line at Hagerstown (Md.) Speedway. Nine years later, he did it on back-to-back nights at Potomac (Md.) Speedway – where he led eight laps – and Winchester (Va.) Speedway on August 12-13, 2016. His most recent runner-up result came on August 19, 2017 at Port Royal (Pa.) Speedway to Brandon Sheppard.

One of the most surprising drivers to never lay claim to World of Outlaws fame is Bobby Pierce, the 2016 World 100 king and three-time DIRTcar Summer Nationals champion. In 58 starts, the Oakwood, Illinois native has 16 top five finishes and more than 200+ laps led, but has yet to find victory lane. His three closest defeats were second-place runs at Cedar Lake (Wisc.) Speedway on August 2, 2014, Farmer City (Ill.) Raceway on April 3, 2016, and Terre Haute (Ind.) Action Track on June 28, 2019. Plus, let’s not forget the ’19 Prairie Dirt Classic at Fairbury (Ill.) Speedway, when Pierce was leading the final lap before a $30,000 slide job from Brandon Sheppard knocked him back to third.

Another eight drivers have been next best in at least two races throughout their career.

Before his employment at Rocket Chassis, Eddie Carrier Jr. of Salt Rock, West Virginia nearly became an Outlaw winner at River Cities (N.D.) Speedway in ’07 and Atomic (Ohio) Speedway in ’15.

The Silver Shark Scott James of Lawrenceburg, Indiana finished a career-best second at Bluegrass (Ky.) Speedway in ’11 and Bubba (Fla.) Raceway Park in ’13.

Bear Lake, Pennsylvania’s Boom Briggs, a current full-time Outlaw, is still chasing that elusive first career win following P2’s at Screven in ’16 and Eriez from this August, when he led 40 laps in front of his hometown crowd.

ARCA winner Ryan Unzicker of El Paso, Illinois has earned both of his second-place runs in his home state at Farmer City in ’16 and Fairbury in ’17.

Both of Oxford, Iowa’s Chris Simpson’s runner-up finishes have also came in his home state with both losses coming at the hands of Brandon Sheppard at Dubuque (Iowa) Speedway in ’18 and Independence (Iowa) Motor Speedway in ’19.

Joining the aforementioned 13 drivers is another set of 15 with their closest taste of victory coming by virtue of only one second-place bid.

Greg Johnson of Bedford, Indiana finished second to Brian Birkhofer at Volunteer in ’04.

Ronny Adams of Dianna, Texas, who passed away last year, recorded his career-high close to home at Lone Star (Tex.) Speedway in ’04.

Chris Wall of Holden, Louisiana also tried to defend his home turf with a second-place score to Clint Smith at Baton Rouge (La.) Raceway in ’06.

Will Vaught of Crane, Missouri suffered his closest Outlaw loss at Columbus (Miss.) Speedway in ’11.

Greencastle, Pennsylvania’s D.J. Myers was one spot shy of a big check at Winchester in ’11.

At 22-years-old, Nick Kurtz of Greenville, Michigan almost beat the Outlaws in ’16 with his second at Merritt (Mich.) Raceway.

Russ King of Bristolville, Ohio laid down his career-best at Eriez in ’17.

Douglasville, Georgia’s Michael Page put on a hometown show with his second to Chris Madden at Senoia (Ga.) Raceway in ’18.

Darrell Bossard of Centerville, Pa. was second to Sheppard at Stateline in ’18.

Kyle Hardy of Stephens City, Va. established his career-best at Screven in ’19.

The most recent addition to this group is Jared Miley of Pittsburgh, Pennsylvania, who had his first-career Outlaws victory in the bag at Thunder Mountain (Pa.) Speedway in September ’20, before a caution flew and relegated him to second on the final restart.

Drivers like Boom and many more will be looking to remove themselves from this list and join the all-time wins list when the 2021 World of Outlaws Morton Buildings Late Model Series season begins on January 14-16, 2021 with the Sunshine Nationals at Volusia Speedway Park.