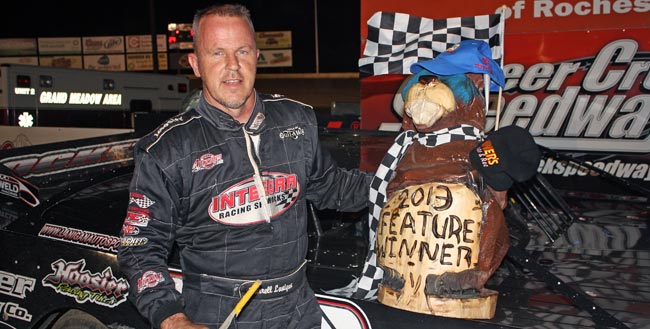 Lanigan, 43, of Union, Ky., earned $11,650 for his fourth triumph in 11 career WoO LMS starts at Deer Creek. He has finished outside the top three just twice since he began visiting the Queensland family’s track in 2005.

“This place is awesome,” said Lanigan, whose previous wins at Deer Creek came in the NAPA Gopher 50 in 2005 and 2009 and the opening night of the 2006 Heartland Nationals. “They work (the surface) right before the feature and it’s always great racing here. It’s a good place where you can get up on the wheel and race all over the racetrack.

“We definitely feel comfortable here, and our car seems to always work good here. I just like to come to Deer Creek.”

Though Lanigan did not grab the lead at the start of the race from his pole position slot on the grid, he overtook Chris Simpson of Oxford, Iowa, for the top spot on lap 10 and never looked back. He repelled a mid-race challenge from Josh Richards of Shinnston, W.Va., before pulling away to defeat the WoO LMS points leader by a commanding 3.876 seconds – nearly a full straightaway – at the checkered flag.

Simpson settled for a career-best WoO LMS finish of third after driving off the outside pole to lead laps 1-9. Tour rookie Eric Wells of Hazard, Ky., finished fourth and defending NAPA Gopher 50 champion Shane Clanton of Zebulon, Ga., placed fifth, falling short of becoming the first driver to win the tradition-laden race in back-to-back years since Billy Moyer in 2000-01.

Racing in front of a near-capacity crowd that turned out for one of Minnesota’s most tradition-laden dirt-track events, Lanigan didn’t take long to show the speed in his Cornett-powered Rocket car.

“The outside had a little bit better jump getting in the corner at the start,” said Lanigan, who registered his WoO LMS-leading seventh victory of the 2013 season and the 48th of his career. “You had that momentum on the top, and (Simpson) got ahead. But our car was pretty good on the bottom so we just raced him hard there for the first few laps and got by him.”

Richards, who started fifth in his father Mark’s Rocket house car, slid by Simpson for second on lap 13 and two laps later nosed underneath Lanigan off turn two. The 25-year-old superstar stayed within striking distance of Lanigan until the race’s only caution flag, on lap 24 when Bub McCool of Vicksburg, Miss., slowed in turn four, dulled his bid.

Lanigan immediately left Richards behind on the restart, steadily opening an advantage over his friendly rival with every circuit.

“I saw the (number) ‘1’ on the scoreboard so I knew Josh was back there behind me,” said Lanigan, who sits third in the points standings, 12 points behind second-place Clanton and 46 in arrears of Richards. “I just ran as hard as I could after that restart and I never saw him under me the rest of the way so I figured we were in pretty good shape. The car was awesome.”

Richards’s hopes of winning for the fourth time in his last five WoO LMS starts evaporated during the race’s second half.

“We had a real good car and I feel that before the caution came out we definitely had something for Darrell,” said Richards. “I really wasn’t even running 100 percent yet. But after that caution we lost just a little bit and he had clean racetrack and was a little softer on right-front tire, which helped too.

“And with about 15 (laps) to go we broke a rear bleeder off and lost the brakes. It was a handful after that. I’m just I was able to make it around the racetrack without hitting the wall.”

“They should call this place ‘Darrell’ Creek,” quipped Richards, who won the NAPA Gopher 50 in 2011. “He always runs well here. There’s a pretty good chance he’s gonna win when we come here.”

Finishing in positions 6-10 was Rick Eckert of York, Pa., who could only climb two spots after drawing the worst possible A-Main starting spot (eighth) for the second consecutive night; 20th-starter Tim Fuller of Watertown, N.Y.; Tim McCreadie of Watertown, N.Y., who slipped backward from the fourth starting spot; WoO LMS rookie Morgan Bagley of Longview, Texas, who started third and held strong in fourth place until tumbling from the top five following the lap-24 caution flag; and 19th-starter Jimmy Mars of Menomonie, Wis.

Ohlins Shocks Time Trials were split into ‘A’ and ‘B’ groups, with the first half competing for starting positions in heats one and two and the second half racing against the clock to align heats three and four. Simpson’s lap of 14.097 seconds in Group ‘A’ was not only the fastest overall – giving him his first-ever WoO LMS fast-time honor – but also established a new track record, topping the mark of 14.130 seconds turned by Steve Francis on July 8, 2009.

The WoO LMS Wild West Tour has an off day on Sunday so teams can travel farther west to the early-week doubleheader on Monday night (July 8) at Black Hills Speedway in Rapid City, S.D., and Tuesday night (July 9) at Gillette (Wyo.) Thunder Speedway.

A tradition-laden event co-promoted by Deer Creek’s Queensland family and the Blooming Prairie (Minn.) Lions Club to benefit the club’s various projects, the NAPA Gopher 50 has been run at Deer Creek as a WoO LMS show since 2005. Tonight’s A-Main boasts an $11,000 top prize, including a $1,000 bonus from NAPA.

11 p.m. CT – Darrell Lanigan continued his mastery of Deer Creek Speedway with a convincing drive to victory in the NAPA Gopher 50.

Lanigan grabbed the lead from Chris Simpson on lap 10 and never looked back en route to his fifth win in 11 career starts at the track.

Josh Richards challenged Lanigan midway through the race but crossed the finish line a straightaway behind the victory in second. Simpson was third for a career-best WoO LMS finish, tour rookie Eric Wells finished fourth and Shane Clanton placed fifth.

Darrell Lanigan, who passed Chris Simpson for the lead on lap 10, will pace the field to the restart. Josh Richards sits second, followed by Simpson, Morgan Bagley and Shane Clanton.

Prepping for the Gopher

9:20 p.m. CT – After Jimmy Mars held off Tim Fuller to win the second B-Main (third-place finisher Bub McCool also transferred), the Deer Creek track crew rolled onto the surface to rework the clay for the Gopher 50. Officials expect to work on the track for about 10 more minutes and then bring the WoO LMS A-Main on the speedway.

The field will show 25 cars, including provisional starters Clint Smith (he’s switched to his backup car: the No. 33 of Georgia racer Brian Reese, who let Smith bring his machine on the Wild West Tour), John Mason and track regular Justin Sass.

Darrell in a great spot

9 p.m. CT – Considering Darrell Lanigan’s superb performance record at Deer Creek, he clearly knows the fast way around the three-eighths-mile oval. The rest of the field might have gotten some bad news, then, after Lanigan drew the pole position for the start of the Gopher 50.

Lanigan will take the green flag in the finale with Chris Simpson, who has never won a WoO LMS A-Main, sitting to his outside.

Chub Frank just completed a run to victory in the first of two 12-lap B-Mains. Rick Wendling and John Winge also transferred to the A-Main.

The second B-Main is now on the track….

8:40 p.m. CT – Chris Simpson, Darrell Lanigan, Shane Clanton and WoO LMS rookie Morgan Bagley captured the 10-lap heat races…. Simpson got out of shape in turn two on the final lap, but Tim McCreadie wasn’t able to take advantage to steal the victory. It was Simpson’s second career WoO LMS heat-race win…. Lanigan, who has finished outside the top three just once in 10 career WoO LMS A-Main starts at Deer Creek (four wins, three seconds and two thirds), dominated the second heat…. Third-heat winner Clanton will bid to become the first back-to-back NAPA Gopher 50 winner since Billy Moyer, who pulled off consecutive victories in 2000 and ’01 when the event was held at the Steele County Fairgrounds in Owatonna, Minn…. Bagley, who has visited Deer Creek twice before to run open-wheel Modified events, earned his first-ever WoO LMS heat-race victory…. Clint Smith was the most notable casualty of the prelims, dropping off the pace while running second in Heat No. 2….

8:05 p.m. CT – It’s been a long day already for Bub McCool, who was the last WoO LMS regular to arrive when he pulled through the pit gate around 4 p.m. CT.

McCool ran into trouble during the overnight drive to Deer Creek from Amsoil Speedway in Superior, Wis., when his hauler broke a U-joint sometime after midnight just north of St. Paul, Minn. He was unable to find mechanical assistance until about 11:30 this morning and didn’t get rolling toward Deer Creek until the afternoon.

Adding more stress to McCool’s day, he had to immediately make an engine swap when he unloaded here due to the busted oil pump that struck him on the final lap of last night’s A-Main at Amsoil Speedway. The problem caused him to fall from sixth place to eighth in last night’s finishing order.

Tonight’s first of four 10-lap heats, by the way, is in the staging area and will roll on the track momentarily. The top-four finishers from each prelim will transfer to the A-Main and the top-two finishers will redraw for the first eight starting positions.

7:55 p.m. CT – After some internet troubles in the pit area, we’re set up in the tower and back rolling….

Catching up, Chris Simpson of Oxford, Iowa, flashed around the track in 14.097 seconds during the first group of Ohlins Shocks Time Trials. His circuit was the overall quickest of the split qualifying session and also set a new dirt Late Model track record, besting the old standard established by Steve Francis on July 8, 2009. It was also Simpson’s first-ever fast-time honor on the WoO LMS.

Josh Richards was the fastest of the second qualifying group with a lap of 14.242 seconds, putting him on the pole for the third of four 10-lap qualifying heats for the 33-car field.

5:15 p.m. CT – More than 30 cars are signed in for tonight’s action at the spic-and-span, three-eighths-mile Deer Creek oval, including all 11 WoO LMS regulars plus several nationally-known names and a solid contingent of local spec-engine specialists.

Among the entrants is 2004 WoO LMS champion Scott Bloomquist, who is making his first-ever appearance at Deer Creek. He is a three-time Gopher 50 winner, capturing the race when it was held at the Steel County Fairgrounds in Owatonna, Minn.