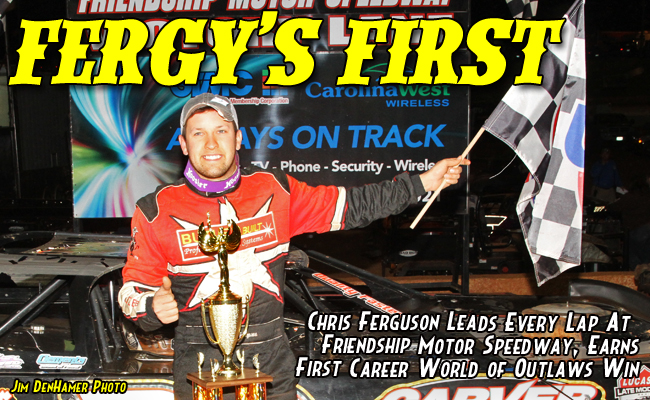 ELKIN, N.C. – May 1, 2015 – Chris Ferguson finally has a World of Outlaws Late Model Series victory on his resume.

Avoiding the bad luck that has plagued him in a number of past events, Ferguson, 25, of Mount Holly, N.C., led every lap of Friday night’s Blue Ridge Bash to earn a career-high $10,550 for his first career WoO LMS victory in the national tour’s first ever visit to Friendship Motor Speedway.

“It’s awesome to finally cross a World of Outlaws win off my list and to do it in my home state,” said Ferguson, whose breakthrough victory came on the opening night of North Carolina doubleheader weekend for the WoO LMS. “I’ve been close a few times and just never had things go our way. But it finally did tonight and we took advantage of it.”

Ferguson was strong all night in his Clements-powered Longhorn Chassis, setting fast time during qualifying, winning his heat race and leading every lap of 50-lap A-Main. He cruised out front through most of the feature and pulled away from 10th-starting Josh Richards of Shinnston, W.Va., on a pair of late restarts on his way to becoming the fourth first-time WoO LMS winner this season.

Richards, the three-time WoO LMS champion, settled for the runner-up spot, 1.525 seconds behind Ferguson at the finish. Frank Heckenast Jr. of Frankfort, Ill., finished third while Eric Wells of Hazard, Ky., scored his best WoO LMS finish of the season in fourth.

WoO LMS points leader Shane Clanton of Zebulon, Ga., muscled his way by Steve Casebolt of Richmond, Ind., for fifth on the final lap, stretching his lead in the championship chase to 72 points over Darrell Lanigan of Union, Ky., who finished behind Casebolt in the seventh. Rick Eckert of York, Pa., and Morgan Bagley of Longview, Texas rounded out the top 10.

Ferguson, a standout regional racer who typically enters a handful of WoO LMS events each season, has had his share of near misses in major events. He’s been successful in WoO LMS preliminary action in the past with three career fast time awards and five heat race wins. But each time his chances of victory all fell short in the main event.

As he closed in on his first WoO LMS victory Friday night, Ferguson feared another bad luck circumstance might cost him yet again.

“There at the end everything starts going through your mind,” Ferguson said. “You start thinking something’s happening when it’s really not. Those last few laps I thought I was spinning a wheel a little bit and thought a tire might be going down, but my crew kept me calm (using signals) down the backstretch and everything went our way.

“To come out here and outrun not only the national guys but all these good regional guys too, it’s awesome. These guys that raced out here tonight, they’re the best in the country. We’ve been close to winning one of these a few times and to be able to finally do it, it’s great.”

In his first visit to Friendship, Richards was among the few drivers able to make use of the 4/10-mile oval’s high groove. Recovering from a poor qualifying effort, Richards hustled his Valvoline-sponsored Rocket Chassis house car forward from his 14th starting spot and took second from Heckenast just after the race’s halfway point.

After falling nearly a straightaway behind during the race’s longest green-flag run, Richards began closing the gap as Ferguson was slowed by traffic just before the 40-lap mark. Two late restarts gave Richards chances to pressure Ferguson, but he couldn’t mount a serious challenge.

“We came here never seeing this place before and I put us behind qualifying driving the wrong line,” said Richards, who with the second-place finish moved into third in the series standings. “We had to dig ourselves out of a hole after that.

“Chris and his guys did a great job. They had the car to beat all night long. We’ll just have to try harder next time.”

Among the race’s nine yellow flags was a caution for a lap-24 tangle between Richards and Casey Roberts of Toccoa, Ga., in which contact between the two drivers turned Roberts’ car sideways in front of the field on the back straightaway. Roberts’ car was hit by Chub Frank of Bear Lake, Pa., leaving both machines heavily damaged.

Due to his actions following the incident, Roberts has been fined and suspended from the WoO LMS effective immediately. The amount of the fine and the length of the suspension have yet to be determined by WoO LMS officials.

Other cautions included an opening lap pileup involving Jordan Yaggy of Rochester, Minn., Chase Junghans of Manhattan, Kan., and Brian Ligon of Augusta, Ga. After running as high as high as seventh early in the race, Ross Bailes of Clover, S.C., slowed to cause a lap-21 yellow.

Tim McCreadie of Watertown, N.Y., briefly held second before his car suffered front-end damage from a tangle on a mid-race restart that eventually forced him to slow for a lap-24 caution. The 2006 WoO LMS champion pitted for repairs and finished 11th in the final rundown.

Leading WoO LMS rookie Brandon Overton of Evans, Ga., started third and ran second in the first half of the race, but ended up 12th after pitting during the lap-24 caution with a flat right-rear tire.

After finishing second in his heat race and redrawing the pole for the feature, Kyle Pierce of Statesville, N.C., ran among the top 10 the entire distance until a scrape with the turn-one wall ended his run on lap 45. He finished 16th.

2015 World of Outlaws Late Model Series Point Standings as of May 1 – 11 A-Mains completed (rank/driver/points/deficit to leader):