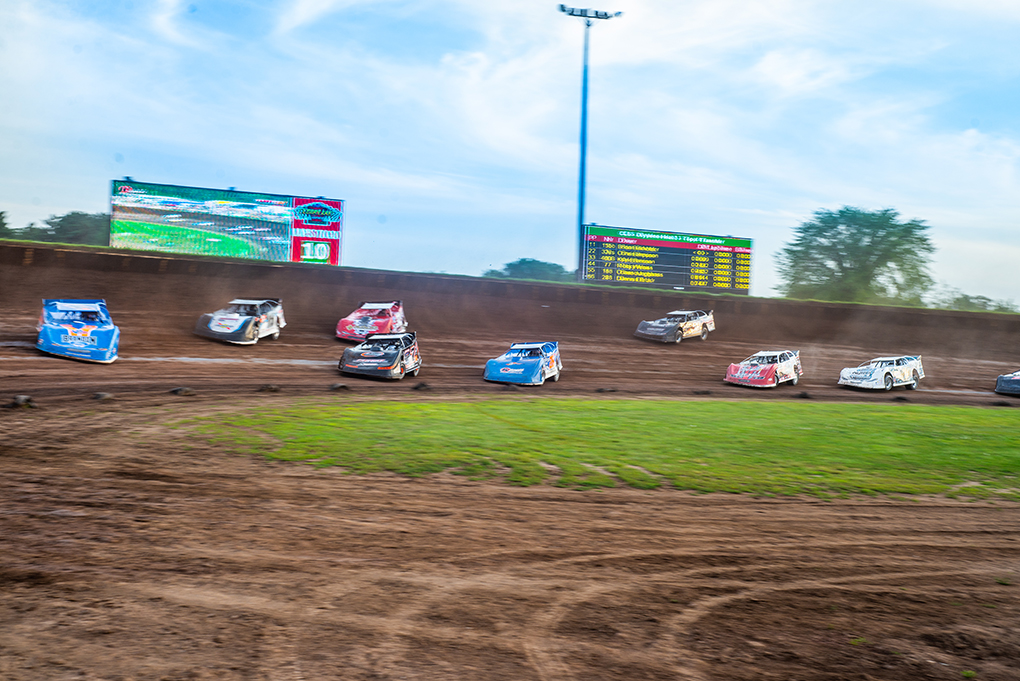 It’s the first MAJOR American sporting event with a full crowd since the COVID-19 pandemic. It’s the first time in history that the World of Outlaws Morton Buildings Late Models and the World of Outlaws NOS Energy Drink Sprint Cars will race together outside of the CAN-AM World Finals. It’s being broadcast around the world LIVE on CBS Sports Network on Saturday night at 9:00pm ET.

Scheduled for Thursday-Saturday, July 2-3-4, Cedar Lake Speedway in New Richmond, Wisc. is the scene for our REBOOT to the 2020 season. We’ll also be introducing state-of-the-art biometric scanners in support of the efforts to fight COVID-19.

Opening on Thursday, July 2 with two flights of qualifying and special $3,000-to-win showdown races for both Late Models and Sprint Cars, fans in the full crowd will get a little taste of what is hitting them over the next two nights.

Friday and Saturday will offer full programs of heat races, Last Chance Showdowns and feature events for both series’ that pay $20,000-to-win, $1,000-to-start both nights.

With such a huge weekend on tap, every Outlaw has his own story entering this inaugural event. Here’s some of the news and notes to remember on each full-time World of Outlaws Morton Buildings Late Model Series driver ahead of the Cedar Lake tripleheader:

THRILLER ON FIRE: Before last weekend, Cade Dillard of Robeline, La. was already hitting his stride and finding a rhythm. After his massive breakthrough $30,000 win at Lernerville’s Firecracker, though? He’s in a whole new stratosphere.

The 29-year old driver never finished worse than fourth in three features at Lernerville Speedway last weekend, which was just his second trip to the Sarver, Pa. 4/10th-mile. Dating back to the end of May, Dillard has five top five finishes in the last six races, which has catapulted him in the top five of World of Outlaws Morton Buildings Late Model Series standings.

RETURN TO FORM: It was no secret that Darrell Lanigan of Union, Ky. and Dennis Erb Jr. of Carpentersville, Ill. were in a funk and struggling when the World of Outlaws ‘RETURNED to RACING’ in May. Through four races at Jackson (Minn.) Motorplex and Davenport (Iowa) Speedway, and then three nights at Eldora’s Dirt Late Model Stream, neither driver could net a top five result.

After a weekend off to regroup, both came back at Bulls Gap and re-lit the fire in their programs. They each snagged a podium finish at Volunteer Speedway and both ended up in the top five of Saturday’s $30,000-to-win Firecracker finale. Lanigan was a factor for the win before finishing third in his Viper Motorsports No. 29V Barry Wright Race Cars, and Erb roared to a fourth place from 12th aboard the Rocket No. 28. Both veterans will look to keep that success rolling this weekend in the Cedar Lake tripleheader.

B-SHEPP’S CEDAR SUCCESS: A three-time World of Outlaws Morton Buildings Late Model Series winner at Cedar Lake Speedway, “The Rocket Shepp” Brandon Sheppard owns two preliminary wins at the track and a $50,000 title in the 2018 USA Nationals. With two $20,000-to-win features up for grabs this weekend, the New Berlin, Ill. native could head back to the Illini State with a cool $40,000 in the bank.

Coming off a rocky road at Lernerville’s Firecracker, Sheppard and the Rocket1 Racing crew had a win snatched from them with last-lap contact on Thursday, then rebounded for victory in Friday’s preliminary, but offered a lackluster sixth in the $30,000-to-win finale. B-Shepp and the Mark Richards Racing group looks to get back on track at a place they’re comfortable at this weekend.

ROOKIE RISING: 20-year old Ashton Winger has made a clear and concise case for himself as the 2020 World of Outlaws Morton Buildings Late Model Series Rookie of the Year, a case that he continues to build as the summer hits. The Hampton, Ga. native has racked up four top ten finishes in his last five feature starts, the best stretch of his young career.

The Franklin Enterprises No. 12 Rocket XR-1 faces another new-to-him track this weekend in New Richmond, Wisc. at Cedar Lake Speedway. He’s at least attended one race and seen plenty of online action at the 3/8th-mile, but Thursday night will mark his first time on track.

HERE COMES THE BOOM: Bear Lake, Pa. native Boom Briggs is fresh off a career-best performance at Lernerville Speedway’s Firecracker in his home state. Between showing speed in qualifying each night, winning a Drydene heat race, starting on the outside pole and finishing fifth on Friday, and contending at the front in Saturday’s finale, the No. 99B was as stout as its been all season long.

TRUE TEST FOR BLOOMER: After a string of four consecutive top five finishes, Scott Bloomquist of Mooresburg, Tenn. was busted with an illegal part related to the quarter-panel height rule on Saturday night at Lernerville. The former World of Outlaws champion was forced to use a provisional in the finale and finished back in 26th.

Running the Team Drydene No. 0, Bloomer heads back to Cedar Lake Speedway this weekend, a track that he won the 2010 USA Nationals at. We’ll find out if his hot streak was a mere coincidence or if the National Dirt Late Model Racing Hall of Fame Inductee is truly back on top of his game.

ROLLERCOASTER RIDE: It’s been an up-and-down journey for Ricky Weiss of Headingly, Manitoba and Chase Junghans of Manhattan, Kans. of late. Junghans started his Firecracker weekend with a top five finish before falling to ninth on Friday and then suffered a flat left rear while running fourth in Saturday’s finale. He’ll return to Cedar Lake this weekend where he’s been a top five contender in the past aboard his Rocket No. 18.

For Weiss, who is second in points, it was a rough road on and off the track. Hauler issues prevented him from making Thursday’s show until feature time and then a forgetful Friday finally led to some success in Saturday’s finale with an eighth-from-17th. The Team Drydene No. 7 driver finished at the front of last year’s USA Nationals at Cedar Lake, a result he’ll hope to duplicate this weekend to get back in the points chase with Sheppard.

CLOSE TO HOME: After a 13-hour haul to Lernerville Speedway last weekend, Brent Larson will have a nice 30-minute drive to Cedar Lake Speedway this weekend. The Lake Elmo, Minn. native lives just across the border from the New Richmond, Wisc. race track, where he’ll get to race in front of friends and family this Thursday-Saturday in hopes of his first top ten of the year.

DIRTVision, the Official Streaming Partner of the World of Outlaws, will broadcast every single lap of the weekend, while Saturday’s feature are also simulcasted on CBS Sports Network at 9:00pm ET.