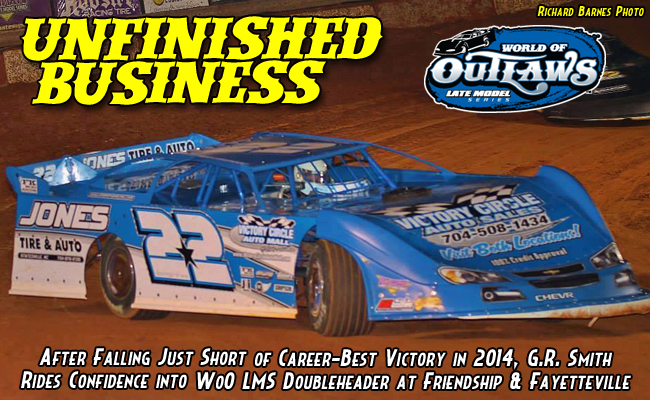 After falling just short of what would have been the biggest victory of his career in last year’s WoO LMS event at Fayetteville (N.C.) Motor Speedway, Smith, a New Jersey native who now calls Cornelius, N.C., home, has been counting down the days until the national tour returns to one of his home tracks.

Smith, 33, will have two opportunities to improve on last year’s near-miss when the WoO LMS makes its first ever visit to Friendship Motor Speedway in Elkin, N.C., on Friday and returns to Fayetteville on Saturday.

“After being so close at Fayetteville, I’ve been waiting all year for another shot at the Outlaws,” said Smith, who will be among a strong contingent of Carolina-based drivers looking to defend their home turf against the WoO LMS regulars in Friendship’s inaugural Blue Ridge Bash and Fayetteville’s Tar Heel 100. “We’ve basically spent the past year trying to improve that little bit that we were missing. Hopefully it pays off and we can get the job done.”

Smith’s strong performance at Fayetteville last season was a welcomed surprise for the former big-block modified racer. After relocating to North Carolina in 2006 following graduation from West Virginia University, Smith emerged as a regional standout in three years of Super Late Model racing from ’06-’09. But he shut down his own program in 2010 to concentrate on building his Victory Circle Auto Sales business.

Smith drove a Crate Late Model for Larry Cassella and Bobby Hart beginning in 2011 and totaled nearly 50 wins. But he was absent from Super Late Model action until returning to the division in 2014.

Easing his way back into the Super Late Model ranks, Smith entered last year’s WoO LMS event at Fayetteville with low expectations. But he came out strong, setting fast time in qualifying and winning his heat race. Starting from the front row, he outdueled 2011 WoO LMS champion Rick Eckert of York, Pa., early in the 50-lap race and led the first 41 laps before fading to third behind three-time WoO LMS champion Darrell Lanigan of Union, Ky., and Jonathan Davenport of Blairsville, Ga.

“Last year at this point, I was really just doing it for fun,” said Smith, whose career highlights include victories with the Southern All Stars and Ultimate Series. “I showed up for the race in an opener trailer with just one guy that came and helped me after hot laps. Other than that, my mom and my sister were my crew.

“If someone had told me I was gonna go to a World of Outlaws race like that and set fast time and win my heat race and lead most of the feature, I would’ve told them they were crazy.

“I didn’t have anyone spotting for me or giving me signals. I just ran the car way too hard for most of the race and used my stuff up. If I had known how much of a lead I had, I could’ve saved some and been a lot better at the end instead of fading like we did.”

Smith was more than pleased with his third-place finish, but he couldn’t help but wonder what could’ve been.

“When you’re a regional racer like me and you get beat by someone as good as Darrell Lanigan, it’s hard to say that you let it slip away,” Smith said. “But I really think if there had been just a couple different circumstances we would’ve won that race.

“Knowing that, it’s been eating at me ever since. It definitely fueled my fire to get out and race more over the past year and try to improve that little bit we need.”

Indeed, Smith has increased his racing efforts since last year’s WoO LMS event at Fayetteville. He reestablished himself as one of the Carolinas’ top regional drivers with a solid season that include a victory on the Ultimate Super Late Model Series among other highlights.

Smith has upped his game even more for 2015, with new equipment – a new Rocket Chassis with a Randy Clary Race Engine – and additional sponsorship from Jones Tire & Auto in Statesville, N.C. Rainouts have limited Smith’s opportunities to race so far this season, but he’s been solid in the few events he has entered with a pair of top-five finishes in four races, including a run from 19th to fourth in a Carolina Clash race at Fayetteville in March.

With confidence in his new Rocket machine, Smith feels good about his chances at Friendship and Fayetteville this weekend.

“We’re definitely excited about both races,” Smith said. “With the new car and our team, I think we’re close to where we need to be. Coming into two big races at tracks close to home, I feel pretty good about where we’re at right now.

“I’ve ran Friendship throughout the years and we’ve always ran strong there,” Smith said. “At Fayetteville, we’ve had a lot of success there with a bunch of wins in the past. So yeah, we’re real excited. We’ve had this weekend circled on the calendar ever since the schedule came out. Hopefully now we can make it worth the wait.”

Listen to live audio from both of the weekend’s WoO LMS events for free on www.DIRTVision.com. Results throughout both events will be posted to the Official World of Outlaws Late Model Series website at www.WoOLMS.com.

Further updates from WoO LMS events are posted on the Official WoO LMS social media pages on Twitter atwww.Twitter.com/WoOLateModels and Facebook at www.Facebook.com/WorldofOutlawsLateModelSeries. Check out the latest videos on YouTube at http://www.youtube.com/WorldofOutlaws.

Friendship Motor Speedway will host the WoO LMS for the first time on Friday, but the track has been the site of a national touring event once before. In 1996, the track welcomed the now-defunct Hav-A-Tampa Dirt Racing Series for a two-day event Aug. 2-3. Legendary racer Freddy Smith won the event.

In the years since, Friendship has hosted numerous regional events with the Southern All Stars and the Carolina Clash tours both making multiple visits.

Fayetteville Motor Speedway has hosted four WoO LMS events. The national tour made its first stop at the track in 2008 and returned in both 2009 and 2010. Fayetteville was set to end a two-year hiatus from the WoO LMS schedule in 2013, but a rainout forced fans to wait until 2014 for the tour to make its return.

Josh Richards of Shinnston, W.Va., made Fayetteville’s first WoO LMS event a dramatic one in 2008 with a stirring rally from the 18th starting spot. The three-time series champion outdueled fellow series regular Shane Clanton of Zebulon, Ga., late in the race to claim the first of his two career WoO LMS victories at Fayetteville.

Fayetteville’s 2009 WoO LMS event was another dramatic race with home-state veteran Jeff Smith of Dallas, N.C., claiming his lone WoO LMS victory after Vic Coffey of Caledonia, N.Y., suffered a flat right-rear tire just before taking the white flag. Coffey led 48 of the race’s 50 laps after starting from the pole, but the 2008 WoO LMS Rookie of the Year was denied his first series victory and remains winless on the tour.

Richards scored another dramatic victory at Fayetteville in 2010. The eventual WoO LMS champion that season, Richards advanced from his 10th starting spot to overtake Steve Francis of Ashland, Ky., for the lead on lap 16, then held off a furious late charge from 2006 WoO LMS champion Tim McCreadie of Watertown, N.Y. Richards edged McCreadie by 0.131 seconds in a side-by-side finish.

The WoO LMS tour’s return to Fayetteville in 2014 produced more late drama with three-time series champion Darrell Lanigan of Union, Ky., overtaking G.R. Smith of Cornelius, N.C., on lap 42 of the 50-lapper. Lanigan pulled away to claim the second of his WoO LMS single-season record 17 victories in 2014, while Smith was denied what would’ve been the biggest victory of his career.