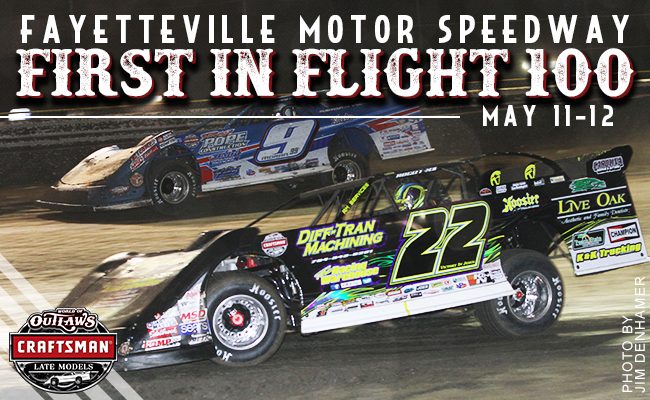 FAYETTEVILLE, NC­ – MAY 7, 2018 – The World of Outlaws Craftsman® Late Model Series invades Fayetteville Motor Speedway on May 11-12 for one of the richest events of the year – the inaugural First in Flight 100 presented by Hoker Trucking, paying $25,001-to-win and $2,000-to-start. This is the biggest payout for an event in the track’s 50-year history.

The one dollar addition in the amount-to-win is in memory of co-owner of the No.1 Dunn-Benson Motorsports team, Carlton Lamm. A “Big C Dash for Cash” on Friday evening will pay $500-to-win and lock in the first three or four rows (depending on car count) of the main event on Saturday evening. Lamm is a former owner of Fayetteville Motor Speedway and has continued to sponsor the track with his Dunn-Benson Ford dealership located only 30 minutes away from the half-mile speed plant.

Rookie of the Year Contender Chris Ferguson is looking forward to entering the marquee event in his home state. The Mt. Holly, NC-based driver will travel three hours from his shop to reach the gates of Fayetteville Motor Speedway. Ferguson collected his second and most recent World of Outlaws win at Fayetteville on May 2, 2015.

“That win was a lot of pressure off of my shoulders,” said Ferguson. “I had multiple shots where I had a chance at winning an Outlaw race in 2013, 2014 and 2015. There are so many times in my career where I wasn’t the best, but I was the best for one night, and I was never able to capitalize on it. It was nice to finally be able to do that.”

“Anyone that grows up racing, whether it’s karts, quarter midgets, or anything, you want to make it to the top of the sport,” continued Ferguson. “There is a lot of guys that have one Outlaw races, but in comparison to the number of drivers who drive Super Late Models across the country, it’s a small group. To be able to say that you’re in that small group is a dream. To be able to say that you’ve done it is a milestone. It takes a while to get to that point.”

After this past weekend’s swing through Georiga and South Carolina, Ferguson is leading the rookie point standings. There are four rookie contenders on the World of Outlaws tour including Ferguson (1098 pts.), David Breazeale (1090 pts.), Brent Larson (1078 pts.) and Timothy Culp (976 pts.).

“This is really our time of the year to step up,” said Ferguson. “Anytime you have any sort of advantage, like racing at a regional track that you know really well, you have to take advantage of it. That’s your chance to have a legitimate shot at winning, and that’s your best shot at winning. When we got to Wisconsin and Minnesota, and wherever else out in the Midwest and Northeast, realistically we know our shot at winning isn’t what it is when we are in the Southeast.”

For any driver, the first win of a season is said to be the hardest one to get. Ferguson hopes that out of the box on Friday evening his Chris Ferguson Motorsports team will be a top competitor at the half-mile semi-banked dirt track.

“Anytime you go to a half-mile like Fayetteville, one that is bigger and sweeping, turns one and two are kind of tight but three and four are kind of sweeping, it separates the boys from the men,” explained Ferguson. “In qualifying, you really have to drive it off into the corner there, but if you miss the groove, it can cost all of our time. You have to drive it off in there but somehow or another, keep the car around the middle or bottom. It’s just a technical track so it’s fun because if you let off two car lengths early, it shows there. That’s the reason why I like it. I hope it’s fast right from the get-go.”

The World of Outlaws Craftsman Late Model Series is excited to join Fayetteville Motor Speedway in celebrating its 50th season during the inaugural First in Flight 100. Friday, May 11 night will consist of World of Outlaws qualifying, heats and the $500-to-win “Big C Dash for Cash”. Also on Friday will be U-Cars, Camping World Pure Stocks, Super Streets and Legends. On Saturday, May 12 will be World of Outlaws Last Chance Showdown(s), a $2,000-to-win non-qualifiers race, and the $25,000-to-win, $2,000-to-start main event – First in Flight 100. Also racing on Saturday will be the Budweiser Late Models, DIRTcar UMP Diet Mtn Dew Modifieds, and Super Stock 4.