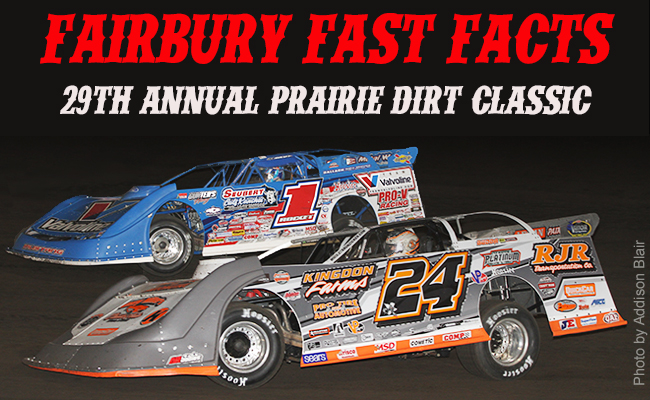 FAIRBURY, IL — July 26, 2018 — The World of Outlaws Craftsman® Late Model Series travel to Fairbury American Legion Speedway (IL) for the prestigious 29th annual Prairie Dirt Classic presented by Bank of Pontiac this Friday-Saturday, July 27-28th. Defending series champion, Brandon Sheppard comes into the weekend as the defending race winner of one of the crown jewels of the dirt late model world. $30,000 is on the line on Saturday night and below is what you need to know heading to Fairbury, IL this weekend.

•The 29th annual Prairie Dirt Classic is race #29 of the 2018 racing season for the World of Outlaws Craftsman® Late Model Series.

•This event is the seventh all-time appearance for the Outlaws at Fairbury American Legion Speedway. The first was in 2013.

•Five of the six events at Fairbury have been for the PDC. The lone exception would be the 2015 FALS Draw Showdown held prior to the 2015 PDC, won by fan favorite, Kevin Weaver. Side Note: Weaver, a four-time track champion, does have a PDC win, which came in 1991 in the second edition of the race.

•The PDC became Outlaws sanctioned for the first time in 2013. The previous events from 1990-2012 the race was a regional show at FALS.

•In the previous 28 overall races, three-time series champion, Billy Moyer leads the way with (5) wins in the event. He is trailed by Bob Pierce with (4). Shannon Babb has (3), Jimmy Mars has (2) while 13 different drivers have single PDC triumphs.

•Jason Feger was the winner in the last non-Outlaws sanctioned PDC in 2012.

•The first PDC was held in 1990 when five-time track champion, Cary “Snooky” Dehm scored the win.

•This event is, amazingly, the first appearance of the 2018 racing season for the Outlaws in the state of Illinois. The next race for the series in the Prairie State will be the Chi-Town Showdown on October 12-13th at The Dirt Track at Route 66 in Joliet, IL

•The quarter-mile of FALS is one of the smallest tracks on the 2018 schedule.

•While Shannon Babb holds the Outlaws Track Record in qualifying with a 12.388 back in 2014, it’s three-time track champion, Scott Bull who has the overall Late Model Track Record at FALS with a 12.215 set back in 2011.

• The Prairie Dirt Shootout, implemented in 2010 as the “non-qualifiers” race for those who do not make the show either through the Showdown Features on Friday night, or the Last Chance Showdowns on Saturday. The winner of the Shootout has the option of taking the $2,000 prize money and loading up or the 27th starting spot in the 100-lap Feature. Don O’Neal took the starting spot in 2017 and finished 18th in the main

•Brian Shirley has (2) wins in the Prairie Dirt Shootout. The only driver with more than (1).

•Shannon Babb and Jonathan Davenport are the two drivers with wins in both the #PDC and the Prairie Dirt Shootout. No driver has won both in the same year.

•Ryan Unzicker is the defending track champion at FALS after capturing his first such title at his home track.

•Four-time track champion, Kevin Weaver is the current points leader at FALS and has (1) Feature Win

•Speaking of Curl, the three-time FALS Modified Track Champion is a rookie this season in Late Models competition and has been impressive. (1) Feature Win. He is currently fourth in points and is the younger brother of Outlaws Series Director, Matt Curl.

•The Summit Racing Equipment Modified Nationals will wrap up their 2018 racing season this weekend as well. After supporting the DIRTcar Summer Nationals Hell Tour, the Summit Mods will crown their champion at the end of their 40-Lap / $5,000 to Win Feature on Saturday. Mike McKinney leads five-time and defending Summit Modified Nationals Champion, Mike Harrison by just four points (615-611) with Kenny Wallace in third. Like the Outlaws, the Modifieds will follow a similar format for setting their field with four Qualifier Features on Friday to help set Saturday’s Feature lineup.

There will also be spots reserved for two World of Outlaws and two #FALS Provisionals that will round out the 26-car starting field for the #PDC. One more starter could come from the 9th annual Prairie Dirt Shootout presented by Summit Racing Equipment for non-qualifiers. The winner will have the option of taking the $2,000 prize money and loading up or the 27th starting spot in the Sears Craftsman 100-lap Feature for a chance at a $30,000 payday.

For more information on the Prairie Dirt Classic presented by Bank of Pontiac visit: fairburyspeedway.com. Tickets are still available online, and the event will air live on DIRTVision and DirtOnDirt.