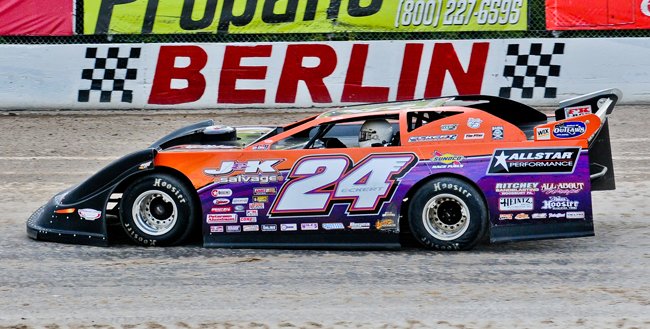 MARNE, MI – Sept. 20, 2012 – Rick Eckert was reminded of another racetrack as soon as he took his first practice laps around the newly dirt-covered Berlin Raceway on Thursday.

But the defending World of Outlaws Late Model Series champion wouldn’t publicly declare the name of the speedway he likens to Berlin, a well-known 7/16th-mile paved oval that has been transformed into a dirt track for this weekend’s historic $20,000-to-win Keyser Manufacturing ‘Down & Dirty 100’ presented by NAPA Auto Parts.

“I’d rather not say what I think it’s close to,” Eckert said during a break in Thursday’s open practice session that saw 20 dirt Late Models tour the unique, D-shaped oval. “I already told (Tim) McCreadie and he’s making all the changes to his car for that track, so I’m not saying what track I think (Berlin) races like.”

Considering the speed he flashed on Thursday, Eckert, 46, of York, Pa., has hit on a solid setup. He turned the fastest lap in three of the four practice sessions – and in the fourth, he timed second-fastest behind WoO LMS points leader Darrell Lanigan of Union, Ky.

“I feel like we’re where we need to be right now,” said Eckert, who owns 27 career WoO LMS A-Main victories (fourth on the tour’s win list since 2004) but has never captured a 100-lap race on the circuit. “The weird thing is, we’ve made some big changes and it hasn’t changed our times much. I don’t know if that’s because of the line we’re running or what, but I’m happy with how our car is working so far.”

Eckert was impressed with Berlin’s surface, a one-foot-thick layer of dirt that was applied last week. Over 300 truckloads of clay were spread around the speedway under the watchful eye of Canandaigua (N.Y.) Motorsports Park promoter Jeremie Corcoran, a former DIRTcar big-block Modified driver who was brought in by Berlin Raceway management to handle track preparation for the track’s first dirt race since 1965.

“They did a nice job putting it on,” said Eckert. “It’s smooth – real smooth. Down there in (turns) three and four, where it was shaded all day long, it’s held some moisture, but everywhere else it’s dry and slick.

“If they get moisture in the whole thing, it’ll be ‘hold-your-breath’ all the way around – it’s a big circle. You carry so much speed through three and four that off of four you pucker because you’re almost gonna hit the wall at the flagstand. It makes you think – you’ve got the wheels turned and you’re pushing and pushing, and finally, at the last second, it comes back around there (toward turn one) and then you take a breath again.

Lanigan, 42, was fastest during the third session with a lap of 18.103 seconds, nipping Eckert’s clocking of 18.226 seconds. Lanigan has already won a record 14 WoO LMS A-Mains this season and will bid for an unprecedented third 100-lap tour victory in a single season when the ‘Down & Dirty 100’ is contested on Saturday night (Sept. 22).

Eckert was one of three drivers to time among the top five in all four practice sessions, joining Brandon Sheppard of New Berlin, Ill., and Clint Smith of Senoia, Ga.

WoO LMS Rookie of the Year leader Bub McCool of Vicksburg, Miss., was the lone tour regular not on hand for Thursday’s practice. He will make his first laps at the track on Friday.

A surprise participant in Thursday’s hot laps was former NASCAR Nationwide and Camping World Truck Series champion Johnny Benson, a native of nearby Grand Rapids, Mich., who launched his racing career on Berlin’s asphalt. He was behind the wheel of Michigan driver Dave Hartman’s full-fender machine.

A steady stream of fans filed through the Berlin Raceway gates throughout Thursday’s open practice to get a taste of the dirt action to come this weekend.

The two-day extravaganza kicks off on Friday night (Sept. 21) with WoO LMS time trials and heat races. Also on the agenda will be support-division racing for the DIRTcar UMP Modifieds, Street Stocks, Bombers and Four-Cylinders/Warriors.

Saturday’s card features B-Mains and the Keyser Manufacturing ‘Down & Dirty 100’ presented by NAPA plus full shows for the UMP Modifieds and Street Stocks.

Gates open at 3 p.m. and racing will begin at 7 p.m. both Friday and Saturday.

Fans can purchase tickets on-line and obtain the latest information on the event by logging on to www.berlinraceway.com or calling the track office at 616-662-2051.