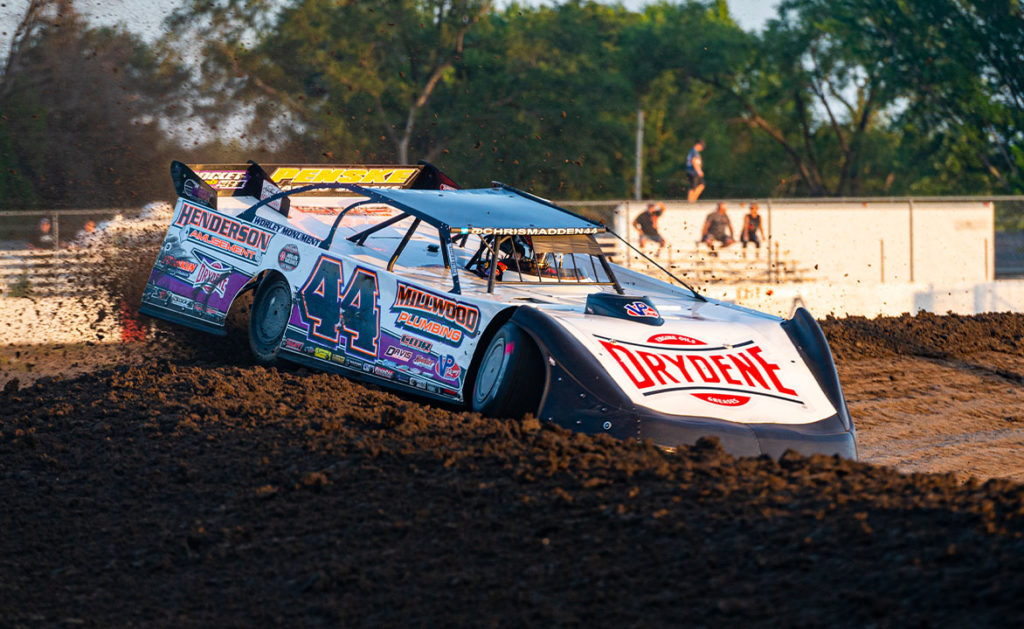 From the wisdom of experience, it’s been said, “the best view comes after the hardest climb.”

For Chris Madden, that view is standing on the iconic Eldora Speedway stage, raising a globe into the air after winning the World 100.

“Smokey” has never won a Crown Jewel at the Rossburg, OH oval, but he’s been close on a few occasions.

One of those was in June when he finished second to Brandon Overton in the 26th Dirt Late Model Dream. The Gray Court, SC driver was close enough to taste victory, leading with 16 laps to go before Overton snuck by for the win.

Madden is confident he’ll have another shot to win when he takes on the best in Dirt Late Model drivers in DIRTcar competition this weekend.

“I feel like I left [The Dream] on a good note,” Madden said. “Hopefully, I can go back and get a little bit better than I was, and maybe we can pick us up a couple of wins.”

Another reason for Madden’s confidence is Eldora is his favorite track. Even though Victory Lane has eluded him, he’s confident all he needs is for the cards to fall his way.

“If we don’t, I’ve had a lot of success there; had a lot of good times there. It’s my favorite place, and I guess it would be a disappointment to me if I did not get one.”

Drivers will compete in four nights of racing at Eldora for the second time in 2021. While teams will be thrashing to get their cars ready for the first green flag, Madden believes there’s a silver lining if things don’t go well the first night.

While winning one of the Worlds would satisfy Madden, there’s always the chance he could achieve both. “Smokey” was amazed by Overton’s sweep of the Dirt Late Model Dreams and knows it’s possible to sweep the Worlds.

“I never would’ve thought I’d seen what I seen last time I was there. I never thought I’d see anyone do what Overton done,” Madden said. “It’s pretty amazing for someone to be able to do that in one week. We’ve had people that have won them back-to-back, but that Overton really done something that was amazing.

“I’d love to be the next guy to do it but it’s hard to do. But obviously it can be done because [Overton] done it.”

Madden hopes to add a “Globe” to his accolades, and at least $50,000 to his bank account if he can complete his most significant challenge at “The House that Earl Built.”

If he can climb the mountain that’s eluded him, it’s a view he’ll never forget, watching fire burst from the stage with the World in his hands at Eldora.