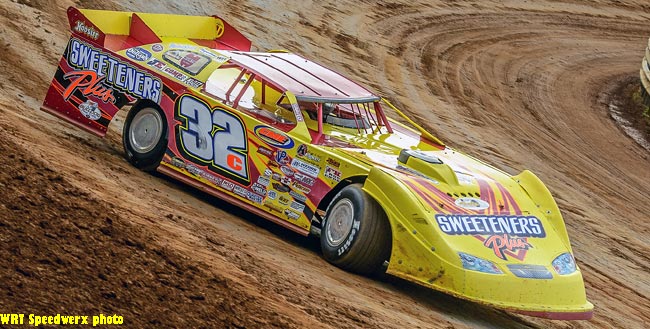 Wednesday (Aug. 29) Event Brings Series Regular To New York Track Where He Captured The Only Victory Of His Dirt Late Model Career

LITTLE VALLEY, NY – Aug. 27, 2012 – Vic Coffey has endured enough heartbreak in his pursuit of an A-Main triumph on the World of Outlaws Late Model Series. He’s ready to break down the door to Victory Lane – now.

There might not be a better track for Coffey to take his next shot at a World of Outlaws checkered flag than Little Valley Speedway, which hosts the national tour for the first time on Wednesday night (Aug. 29). The half-mile fairgrounds oval is, of course, the site of the only feature win of Coffey’s dirt Late Model career to date.

“I really like that place,” said Coffey, who captured an unsanctioned dirt Late Model event at Little Valley on Sept. 9, 2007. “I won the first time I ever ran there and we’ve been good every time we’ve been there since then, so I’m definitely looking forward to the Outlaw show. If there’s a track where I feel good about our chances of finally knocking off one of these Outlaw races, it’s Little Valley.”

A 41-year-old racer from Caledonia, N.Y. (about two hours northeast of Little Valley), Coffey enters Wednesday evening’s 50-lap, $10,000-to-win spectacular winless in 139 career WoO LMS A-Main starts. But the tour’s 2008 Rookie of the Year has nearly a half-dozen near-misses on his record, including, most recently, a second-place finish on July 10 at Black Hills Speedway in Rapid City, S.D., after he briefly grabbed the lead with three laps remaining only to be outdueled in lapped traffic by defending WoO LMS champion Rick Eckert of York, Pa. He also finished second in a 2009 event at Brewerton (N.Y.) Speedway after a late caution flag cost him the lead and lost likely victories to misfortune in ’09 at Fayetteville (N.C.) Motor Speedway (last-lap flat tire) and ’11 at Needmore Speedway in Norman Park, Ga. (tangle with a lapped car).

“Getting that first World of Outlaws win has been tough,” said Coffey, who ranks eighth in the current WoO LMS points standings as he bids for a career-best performance on the circuit. “It can be frustrating to come so close so many times, but I choose to do this deal with the Outlaws and that obviously makes the wins harder to come by.

“We’ve probably let a few (wins) get away and had some tough luck, but the competition on this series is real good. We feel like when we finally win one, we’ll have earned it.”

Coffey has high hopes for the WoO LMS invasion of Little Valley, a track that happens to fit squarely in his wheel house. Following his ’07 victory, his three ensuing starts over the next couple of seasons yielded a runner-up finish and a pair of fourths.

“For whatever reason, I just seem to go good there,” said Coffey, who chases the WoO LMS as a Sweeteners Plus teammate to 2006 tour champion Tim McCreadie of Watertown, N.Y. “It’s one of those big old flat tracks like I grew up racing (DIRTcar big-block Modifieds) at back home. There’s maybe a little longer straightaway and narrower corners than what I’m used to, but it just seems like one of those longer, flatter tracks that I’ve always been more comfortable on and seem to get around well – places (in New York) like Rolling Wheels, Middletown (Orange County Fair Speedway), even Canandaigua.

“Places like Eldora (Ohio), Tazewell (Tenn.) – those places that got high banking, they never really seem to be my deal. Maybe it’s me, but I just haven’t figured out what works at tracks like that. Flatter, high-speed tracks like Fayetteville, Black Hills and Little Valley seem to be my kind of deal.”

Coffey remembers how easily he found the fast groove around Little Valley in his ’07 debut. While still a DIRTcar big-block Modified regular at the time, he beat some talented dirt Late Model veterans for his milestone triumph.

“I remember getting the lead by actually splitting Bob Close and, I believe, Dick Barton in (turns) three and four,” said Coffey, who began dabbling in the dirt Late Model division in 2001. “I just got to them and saw there was one on the top and one on the bottom, so I just tried the middle. It had some bite and I rolled right through there to get the lead off four.

“That was my last Late Model race of the year. I remember we got home and stripped that car down for the winter, and we found that the rearend spool had three big cracks in it. It wasn’t gonna make it for night two (Little Valley had a second straight night of racing scheduled that year but it was rained out) and it probably barely held on for the one we won. We got lucky we didn’t have a failure that night.”

It’s been a while since Coffey last visited Little Valley, but he’s confident he can recapture the speed he flashed in the past. He just knows he’ll have to show more of it to outrun a talented field of WoO LMS stars that includes McCreadie (three-time winner in ’12); Eckert (three victories); record-setting points leader Darrell Lanigan of Union, Ky. (13 wins); 2012 Eldora Dream winner Shane Clanton of Fayetteville, Ga.; Chub Frank of Bear Lake, Pa., who is familiar with Little Valley thanks to numerous appearances there; Clint Smith of Senoia, Ga; Tim Fuller of Watertown, N.Y.; Pat Doar of New Richmond, Wis.; and rookies Bub McCool of Vicksburg, Miss., and Kent Robinson of Bloomington, Ind.

“We don’t do anything special setup-wise and it seems to work there,” said Coffey. “But it’ll be different with the field of cars that will be there this time. There’s some good local racers that run there, and all of the Outlaw guys will unload and be fast whether they’ve been there before or not. We’ll have our hands full, that’s for sure.

“Hopefully we start off good in qualifying and get in the redraw, and then it takes some of these Outlaw guys just long enough to figure the place out that some of them don’t qualify right up front and they have their work cut out for them.”

Coffey’s prospects are buoyed by his most recent outings on the WoO LMS. He finished a strong third on Aug. 17 at Winston Speedway in Montague, Mich., and set fast time and won a heat race on Aug. 18 at Merritt Raceway in Lake City, Mich., before a busted power-steering pump ended his promising A-Main run.

“We’ve been decent lately,” said Coffey. “We changed some stuff around on our (Rocket) car), and we got a motor back that we had sent out for a rebuild. Bill (Schlieper) at ProPower (in Sullivan, Wis.) made a little cam change and boy, I was really impressed with it last week in Michigan. The thing runs really good and I’m excited to see what it can do on those long straightaways at Little Valley.”

Gates for Little Valley’s midweek program, which also includes a DART Challenge event for the BRP CanAm Late Models and racing for the E-Mod division, are scheduled to open at 1 p.m. Hot laps are set to begin at 6:30 p.m., followed immediately by WoO LMS Ohlins Shocks Time Trials and then racing at 7:15 p.m.

In addition to Little Valley’s historic covered grandstand that boasts comfortable stadium seating, speedway officials have secured additional bleachers to boost capacity for the night to over 4,000.

Fans will enjoy free parking and free camping with hook-ups on the grounds of the facility, which is located at the Cattaraugus County Fairgrounds on Rt. 353 in Little Valley, N.Y., just eight miles from the resort town of Ellicottville and seven miles north of the Salamanca exit off Interstate 86.

Admission for the event is $25, with children ages 6-12 charged $15 and kids under six admitted free of charge. Pit passes will cost $35.

More information is available by logging on to www.littlevalleyspeedway.com or calling 716-938-9146.