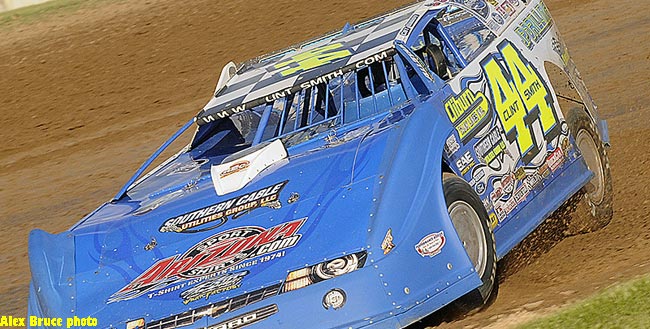 “We’re looking forward to every race right now,” said the veteran driver from Senoia, Ga. “The way we’ve been running, we’re feeling pretty good about ourselves.”

Indeed, Smith, 47, has reason to smile as the WoO LMS heads to Shawano for the third consecutive year. While his performance record in two previous starts at the half-mile oval 45 minutes Northwest of Green Bay isn’t noteworthy, he enters the 50-lap, $10,000-to-win mid-week event in the midst of a summertime surge that has revitalized his racing fortunes.

A WoO LMS regular since the circuit was re-launched in 2004 under the World Racing Group banner, Smith has struggled to consistently contend with his self-owned race team since finishing a career-best third in the 2007 points standings. He got off to a slow start again this season – just one top-five finish through the first 15 A-Mains – but he’s picked up steam over the last two months, registering five top-five runs in the last 10 races to surpass his total in that category for the entire 2011 campaign.

The last two WoO LMS shows, in fact, represented Smith’s best outings of the season. He led every lap but the last one on July 13 at River Cities Speedway in Grand Forks, N.D. – Darrell Lanigan of Union, Ky., overtook Smith off the final corner to win the 50-lapper by a mere 0.024 of a second – and finished a solid third on July 14 at North Central Speedway in Brainerd, Minn.

Throw in a $5,300 victory in a Southern Nationals series event on July 22 at Rome (Ga.) Speedway – Smith’s first checkered flag of ’12 – and it’s clear that things are looking up in Cat Daddy’s world.

According to Smith, technical assistance he’s received from Lanigan, who set a new modern-era WoO LMS single-season win record when he recorded his 10th triumph of ’12 at North Central, and Peach State asphalt Late Model standout Bubba Pollard has gotten him back in a competitive state.

Smith traces the start of his resurgence to a conversation he had in early June with the 25-year-old Pollard, who not only lives a half-mile from Smith but is also a cousin of Smith’s wife, Kim.

“We actually were looking at a picture of my car that come across on the computer – a picture that looked real cool from Ocala (Florida’s Bubba Raceway Park),” said Smith, who often talks with Pollard. “I had the left-front a little bit off the ground, the left-rear was digging and the car was kind of rocked on the right-rear, which made for a great picture but not a great setup. We got to watching Darrell Lanigan’s car – he’s been real good this whole year – and saw how it was down on the right-front and the right-rear and steering around the corner so good, and we realized we had to get our car more like his.

“After (a WoO LMS event at) Delaware (International Speedway on May 31), we came back, and Bubba said, ‘I think I can help you all fix that.’ So we started doing some of his shock and spring stuff, trying to interact the dirt and asphalt worlds a little bit to try and make the car do what Darrell’s car looks like.”

Smith noticed immediate positive results in the DIRTcar-sanctioned Dream on June 9 at Eldora Speedway in Rossburg, Ohio, finishing sixth in the 100-lap crown-jewel race with “probably one of the best cars we’ve ever had at Eldora.” He was strong the following week in WoO LMS events at Hagerstown (Md.) Speedway and Eriez Speedway in Hammett, Pa., but dropped out of both with mechanical trouble, and then he rang up WoO LMS finishes of fifth on June 22 at Quebec’s Autodrome Granby (after leading the first 22 laps) and fourth on June 26 at Canandaigua (N.Y.) Motorsports Park.

“By that time we were talking with Darrell a little bit and found out some of the stuff he was doing,” said Smith, who has been traveling up-and-down the road with Lanigan this summer. “Darrell has the same kind of (Rocket) car that we’re running so we’ve been sharing some information back-and-forth, and when he threw a little something my way to try and get us helped out we realized that he was doing somewhat the same kind of stuff that we were trying with Bubba.”

In the wake of his runner-up finish at River Cities, podium placing at North Central and Southern Nationals win in his home state, Smith has developed a confidence in his Rocket Chassis/RaceTek engine combination that he hasn’t had in some time. He sees the end of his 50-race WoO LMS winless streak being close at hand and a rise from his current seventh-place spot in the points standings being entirely possible.

“If you can just start getting those top-fives like we’ve been getting you’ll eventually get a win,” said Smith, whose last World of Outlaws triumph came on May 8 at Needmore Speedway in Norman Park, Ga. “Darrell’s been real dominant, so just being able to run with him like we have is an accomplishment.

“I’m feeling great,” he continued. “We have a super package right now, and I think if we can keep this up we’ll get back in Victory Lane and maybe even get into the top five in the points. If we did, that would be a super good year for us.”

Following a two-and-a-half-week break from WoO LMS competition, Smith will attempt to realize his golden hopes beginning with Wednesday night’s program at Shawano. His previous visits to the fairgrounds facility resulted in quiet finishes of 22nd in 2010 (dropped out on lap 22 after his engine lost oil pressure) and ninth in ’11 (from the 14th starting spot), but he’s a big fan of a place he calls “a big superspeedway-type racetrack.”

“Earlier in my career I was always intimidated by the bigger places because, coming from the south, all of our tracks are three-eighths (mile) or smaller usually so I just never got used to running big tracks,” said Smith. “But now, running the big tracks is easier than the small tracks for me. We’ve adapted our driving to the high speeds and the bigger tracks seem to suit our Rocket cars.

“I really like Shawano. It’s a super-good racetrack as far as passing, and it’s a super-nice facility too.”

Shawano’s Wed., Aug. 1, program, which also includes action for the IMCA Northern Sport Mods, is scheduled to begin with hot laps at 6:30 p.m.

Reserved seat and general admission tickets are $25 for ages 12-and-over and $10 for children 11-and-under. Seats in the track’s covered grandstand can be reserved in advance by calling Shawano Speedway at 715-526-7069. Pit passes will be $40.

Shawano Speedway is located about 45 minutes northwest of Green Bay and three-and-a-half hours east of Cedar Lake Speedway in New Richmond, Wis., where the WoO LMS heads for the 25th annual USA Nationals on Aug. 2-4.