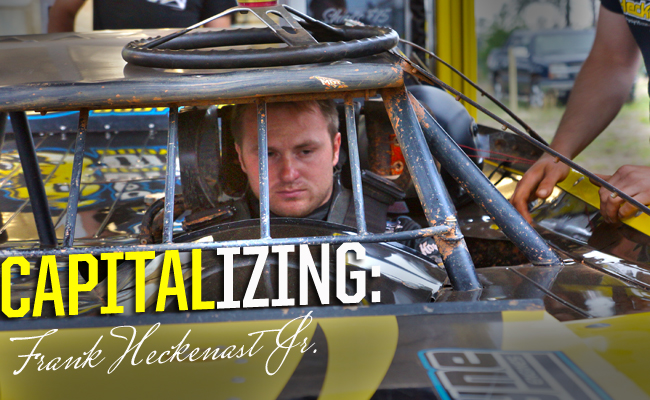 Frank Heckenast Jr. had a golden arm – fit to relieve the typical teenage pressure of fitting into high school social constructs. He could have been the star quarterback or a starting pitcher. The then-middle school graduate had his options in stick-and-ball sports.

But for whatever reason, Heckenast Jr. had a different fate that would soon separate himself from the rest of his peers. It took one seemingly unfortunate event in his first day of football tryouts.

Heckenast Jr., a full time driver for the World of Outlaws Craftsman® Late Model Series, understands that like any of the team sports he has played, success in racing means taking help even if it is from your weekly opponents. His bond with one driver soon led to an equipment change that may get him on-track to his goal: a top five finish in the series championship.

The Illinois-native played football and baseball for eight years leading into this tryout. This time he was in the secondary on defense; select players played both sides of the ball at this level. A ball was thrown his way.

“…and so I got hurt,” said Heckenast Jr., reveling back to what could have been. “But that’s when it all started.”

Heckenast Jr. intercepted the ball right out of the air. But as he came down, a player hit him from the side – a triumphant moment turned tragic. The sheer force of the hit shattered the elbow in his throwing arm. This put Heckenast Jr. at a crossroads: get his elbow repaired or try his hand at another competitive sport.

Doctors told Heckenast Jr. that because his arm was not fully developed, repairing the elbow would overall shorten the length of his arm. His odds returning to the field became bleak. But, it was not until his friend took him to a local go-kart track where he found his new solace. He chose the latter; he chose racing.

He and his father, Frank Heckenast Sr., split the cost of a $3,000 cart. In his first year, Heckenast Jr. won 15 out of the 20 races at his local track. Year-after-year the young-gun increased his races, and for six seasons he enjoyed frequent success. But with frequent success came little to no challenge. It was time to move into a full-bodied car.

His father and sister both had their old racecars collecting dust in the shop. What stood-out in the heap of used parts though were multiple components to create a late model. Heckenast Jr. and his father went back-and-forth on whether or not to create a street stock, modified or some other machine, but this one made sense. All the parts were there.

“I had an older car, older motors,” Heckenast Sr. said. “Now that it’s all said and done maybe we should have had him go through the ranks instead of hopping right into late model…but that was a huge moment – things I’ll never forget.”

It was a Frankenstein car with the family No. 99 on the door panels – his father and sister had the number before him and it has been in the family for more than 35 years. It was a C.J. Rayburn car with a Rhyne motor (what he still runs to this day), and following the trend of flames on racecars, this one had a yellow pattern on a red body.

In Heckenast Jr.’s first year, he took Rookie of the Year honors at both his local tracks Kankakee Motor Speedway (Ill.) and Crown Point Speedway (Ind.). The cherry on top of each Sunday was not only finishing out the weekend strong, but at tracks where his father consistently topped the qualifying charts.

His father said he was nothing like him. Heckenast Sr. was a hell-bound, pedal to the metal racer that with any bit traction moved to the front. His son may not throttle-down as much, but mastered the finesse of feathering it through turns for a smooth race to the front.

“A great driver needs to be both,” Heckenast Sr. said. “He can’t qualify to save his life. But he took to [late models]. He can conquer anything.”

Like all things, it is a process. Heckenast Jr. may not have a fast time award under his belt, but in 15 races he has won one heat race and battled into a feature by winning the Last Chance Showdown. He is a man of no excuses; everything is his work. But to get a grip on such a competitive series, he turned to 2015 Series Champion Shane Clanton for some guidance.

“I like that Shane hasn’t quit the series since he started it,” Heckenast Jr. said. “He had a horrible year in ’14, worked even harder and rebounded to a championship. It just says a lot.

“You’re going to have your ups and downs. No one goes and dominates every year. I just like when they struggle, they work even harder and they don’t blame anyone else. They just go to the shop, figure out why they’re getting beat and move forward.”

When the series all-time wins leader Darrell Lanigan left the series for the 2016 season, Heckenast Jr., a Club 29 Race Car driver at the time, did not have the immediate assistance he sought in the World of Outlaws. Lanigan campaigned Club 29 Race Cars until switching to Clint Bowyer Racing at about the same time of his departure.

It was not that Heckenast Jr. was dissatisfied with Club 29 Race Cars – who he raced with since he began in June 2014. It was his relationship with Clanton that escalated into a business decision to switch to Capital Race Cars. Clanton co-founded Capital Race Cars.

“When Darrell left the series, it was a discouraging experience for him,” Clanton said. “I am committed to him. I’m going to be there for him, and I think he has really liked that.

“I just admire helping younger racers trying to get their stardom. You’re out here on your own and you need somebody to look up to. I know it meant a lot when I started out. I help out the ones who want to better themselves. He’s eager to learn and eager to run well.”

Heckenast Jr. competed with the new chassis May 27-29, and recorded a top-five and a top-10 finish in three features. Though the finishes help his point total (he is 10th in points), it is not good enough. Heckenast Jr. comes from a “goals” family, and they are shooting for top five.

“When we don’t run good, it’s definitely stressful,” Heckenast Jr. said. “We’re so competitive, my sister and my old man want me to run good so bad. I try to represent the family and the number the best I can and take it to a higher level than they have.”

His father called it. Even if his son still got his arm repaired, he was still going to race. It is in his family blood, and he has been at the track since he was two years-old. Now on the biggest late model stage – a first for his family – Heckenast Jr. seeks to build the family name and to thank those who got him there.

“My throwing days are over. I can’t throw anything,” said Heckenast Jr. with ease. “I look back on it and I probably could have sucked it up in high school, but I’m thankful for what I have, where we’re at – everything that has happened. It’s been a big family thing and hopefully when somebody takes it on, it’s family and they carry the name. I hope they go even farther with it.”