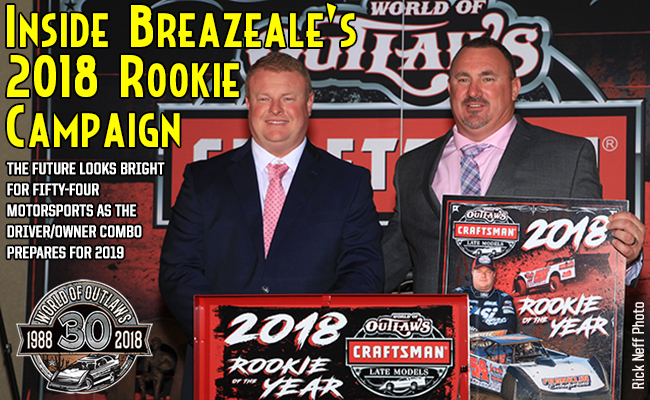 Breazeale and Franklin had realistic goals to meet in 2018, now it’s decision time for 2019

CONCORD, NC – Nov. 13, 2018 – David Breazeale entered 2018 with a wealth of experience behind the wheel in his native Mississippi, but he had never tackled a national tour like the World of Outlaws Craftsman Late Model Series. When the final checkered flag waved on the season, Breazeale laid claim to the Rookie of the Year title.

There’s always bound to be noticeable differences between racers who have run a major series and those who are vying for their first championship on the road. The World of Outlaws Craftsman Late Model Series is certainly no exception, with veteran racers accounting for almost 93 percent of feature wins in 2018. But Breazeale and fellow rookie Brent Larson provided plenty of competition against their more experienced competitors.

Known as “The Ragin’ Rebel” from Four Corners, MS, Breazeale teamed up with car owner Billy Franklin for the second consecutive year and set out to chase the Rookie of the Year title with the Outlaws. The Breazeale/Franklin duo essentially had only two goals in mind — contending for a feature win and winning Rookie of the Year. Together, they accomplished both of those things.

“We had certain goals that we wanted to accomplish going into the season,” Breazeale said. “I know it wasn’t the best year for us, but we did accomplish what we set out to do. … All in all, I felt like we had a good year.”

The black-and-white No. 54 almost won at 411 Motor Speedway in early June, leading the first 22 laps of the feature before falling back to eighth in what was arguably his most impressive performance of the season. He also scored his best finish of the season at Fayetteville in May, finishing third behind winner Jimmy Owens and Brandon Sheppard.

“I had run [at Fayetteville] back in 2009 and was horrible,” Breazeale said. “So it was kind of redemption for me to be able to go back to that place and run good.”

His primary competition for the rookie honors was Minnesota’s Brent Larson, who also made it through his first full national tour to finish 10th in the final championship standings. Larson had his fair share of struggles over the year, averaging a finish of 18.8 to Breazeale’s 14.4 over the final 10 races.

“He was a tough competitor,” Breazeale said. “When it came to feature racing time, he had the faster car a lot of times. But he would have trouble, or something would break. Ultimately, I think what helped us was that we were able to finish a few more races than him.”

Both drivers had a lot to take away from their 2018 campaigns with a lot to build on for the future. Breazeale said he felt his strong suit was in qualifying, be it time trials or heat races, but added he could use work was in feature races.

“Whether it’s me or we’re missing something on the car setup-wise, our feature race program is what needs to be fixed more than anything,” Breazeale said. “The qualifying is good, we start up front in a lot of races and for whatever reason just fall back.”

Confidence in the cockpit is key for any racer. Breazeale said he had a lot of that this year, racing alongside former and current champions like Rick Eckert, Shane Clanton, Brandon Sheppard and Mike Marlar. It’s never easy to be one of the new kids on the block, but Breazeale adjusted well in his first year on a national tour and said he enjoyed being on the track with some of the best the sport has to offer.

“Mainly, just being able to run with them guys and [having] the confidence to know that you can run with them out on the road at different tracks you’ve never seen,” Breazeale said. “Parking beside these guys week-in and week-out and knowing you can compete with them.”

Much of his confidence was instilled in him through both his crew and car owner. The relationship Breazeale has with Billy Franklin has been superb, and this year was one unlike any other for their partnership. Franklin provided much of the financial backing for the team and opened up an entire world of opportunity for Breazeale and his career in racing.

“Billy’s the reason we were able to do this deal this year,” Breazeale said. “He kept me in with the cars and motors. He’s actually the one that was pushing to run for Rookie of the Year and he definitely made it happen for us.”

Overall, it was a solid first full season following a national tour, complete with a Rookie of the Year title forever next to his name in the World of Outlaws history books. There’s no limit to what the Fifty-Four Motorsports team can accomplish in the years ahead.

The 2019 season kicks off in February with events beginning Feb. 8-9 at Screven Motor Speedway in Sylvania, GA, followed by the DIRTcar Nationals at Volusia Speedway Park in Barberville, FL. Visit our homepage for tickets and information about any World of Outlaws event.