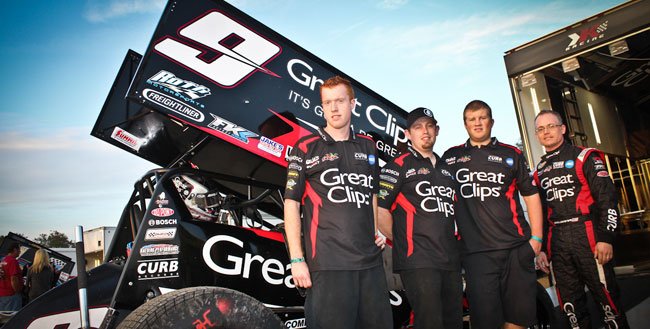 Throughout the season we will provide Q&As with team members within the World of Outlaws Sprint Car Series. This week we chose Kolten Gouse, who is a tire specialist for Joey Saldana.

Background: Growing up approximately five miles from Williams Grove Speedway, Kolten has been immersed in racing since a young age. He raced micro sprints before joining Kasey Kahne Racing as a crewman in June 2007 – only a couple of weeks after graduating high school.

How did you get the offer to work for Kasey Kahne Racing?

“It was just kind of right place, right time. When I got hired the (No.) 9 team was going through a transition. All the pieces fell in place. It was just kinda going to be a summer deal and it’s turned into six years later.”

I heard you gave up a pretty unique opportunity to stay on the road.

“Actually, I had a scholarship for culinary arts and restaurant management. How my scholarship was worded I could probably get it back. I never burned any of the bridges and stuff of the people it was through. I could always pursue that. That’s why it was just going to be a summer deal; come out and travel, who wouldn’t want to do that?” 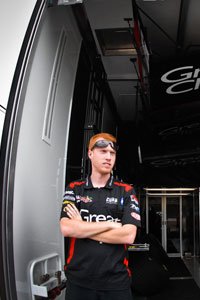 o the two Kasey Kahne Racing teams on the Outlaws tour work together?

“Everybody does work together. Everything is kind of run as a company. The (No.) 4 guys, they’ve got their three guys and we have our three guys. Especially in the offseason, when you’re building wings, building rear ends and all of the stuff, everybody pitches in and helps and tries to knock everything out. It’s a lot easier when you have four or five guys building wings. You can get them all done within a week.”

What is your role during the offseason?

“There’s just three guys per team so in the winter time we all get together and build cars and go through all the general maintenance and stuff on the trucks and trailers. Actually at Kasey’s shop it’s a little bit different because you do a lot of other things, too, during the winter time. You’re not just working on the car. You’ve got your shop duties and stuff. Of course anything that he needs with his foundation or anything like that. Once you’re at the shop you kind of pitch in and do whatever.”

What is your position within the National Open Benefit for Injured Drivers?

“It kind of came about two years ago. They’ve always had a National Open benefit thing at Williams Grove since 2008. I wanted to kind of get involved in it. When you’re out on the road you see how things are done and get a lot of ideas. Last year I was partners with the people who did it … so this year I stepped up and said, ‘I can probably do this.’ I had a bunch of people help out – Greg O’Neill, Grand Prix of Baltimore and stuff like that that really made it a solid foundation. This year half the proceeds goes to the York County Racing Club and the other half will go to the World of Outlaws Benevolent Fund. It’s a good event to raise money in case somebody does get hurt.”

For more information about Kolten and Joey Saldana, visit www.KaseyKahneRacing.com. For more on the World of Outlaws, click WorldofOutlaws.com.