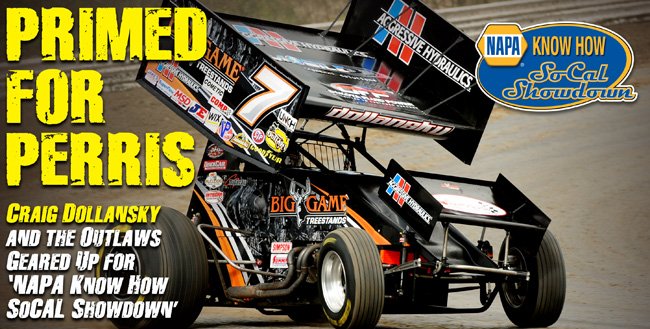 The famed semi-banked, half-mile, which is located on the scenic Lake Perris Fairgrounds in Perris, Calif., has hosted a variety of premier sprint car races since it was built in 1996. Among those have been a dozen World of Outlaws events since that opening year.

“Perris is a great facility,” said Craig Dollansky, who won an Outlaws race at Perris Auto Speedway in October of 1999.

“It’s a pretty racy track. When we haven’t been (to a track) for awhile or just going back for a second time, you’re able to meet a different fan base. We always enjoy getting to different venues.”

Perris Auto Speedway was also the site of Californian Jason Meyers’ first World of Outlaws victory with Elite Racing, which happened in a thrilling feature in February of 2004.

Since that win, the Outlaws have raced at Perris Auto Speedway only once. Kerry Madsen claimed that victory in October of 2007.

“I have never been to Perris, not even to watch a race,” said Lucas Wolfe, who has been racing full time as an Outlaw since 2008. “I’m excited to race there. That’ll be a good opportunity.”

Mark Kinser won the first five World of Outlaws events from 1996-98. Since then, six different drivers – Johnny Herrera, Dollansky, Danny Lasoski, Daryn Pittman, Meyers and Madsen – have claimed a World of Outlaws victory at Perris Auto Speedway in seven events. Lasoski is the only multi-race winner besides Kinser.