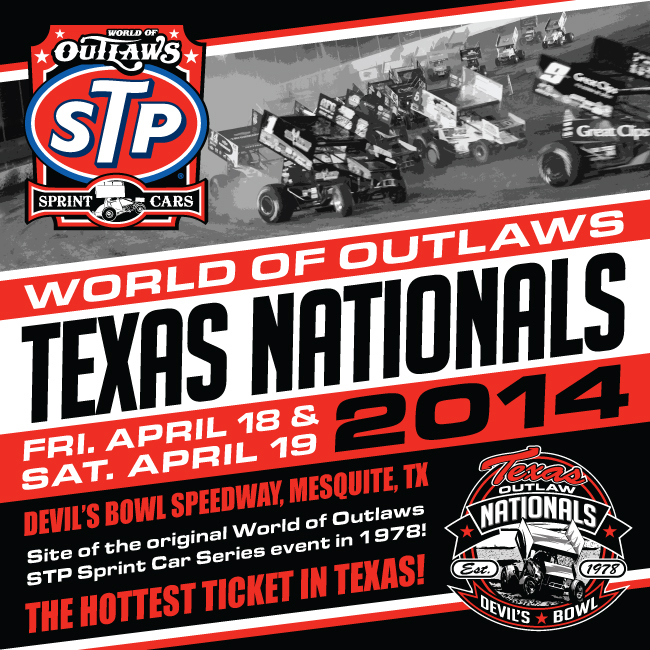 MESQUITE, Texas – Sept. 19, 2013 – The World of Outlaws STP Sprint Car Series is returning to the place where it all began, Devil’s Bowl Speedway, with a weekend that immediately stands out as a must-see event on the 2014 schedule.

The Texas Outlaw Nationals will feature two complete shows and plenty of off-track activities for the fans on Friday, April 18, 2014, and Saturday, April 19, 2014, at the track where the series ran its first race on March 18, 1978. Some of the greatest sprint car drivers in history have competed on the Devil’s Bowl banked half-mile dirt oval through the years, but “The Greatest Show on Dirt” last raced there on March 15, 2003.

“It’s been a long time since the Outlaws raced where it all began, we’re excited for their return,” Devil’s Bowl owner Lanny Edwards said. “This weekend is going to be big.”

Devil’s Bowl played a key role in the history of the series, and on Saturday, April 19, the World of Outlaws STP Sprint Car Series will honor its founder by awarding the first Ted Johnson Cup to the winner.

“Coming home to Devil’s Bowl in Mesquite is exciting, and honoring Ted is also very important to us,” said World of Outlaws CEO Brian Carter. “To race in Ted’s honor at the site of his first World of Outlaws event will be a highly emotional night, for sure. The Texas Outlaw Nationals will be a huge homecoming for the World of Outlaws STP Sprint Cars and an event to remember.”

Sammy Swindell earned 12 World of Outlaws STP Sprint Car Series wins at Devil’s Bowl while Steve Kinser has 10 wins at the semi-banked half-mile oval in suburban Dallas. Swindell, Kinser and the rest of the Outlaws will battle the best of Texas and travelers from across the country in the richest race the state has ever seen. Saturday night’s feature will pay $20,000 to the winner and $1,000 to start while Friday night’s show will pay $8,000-to-win for a total weekend payout in excess of $100,000.

Reserved seating in advance will be available for this historic event. The entire front grandstand will be reserved assigned seating. A special fan bonus will allow access to the pits with a “Fan Pit Pass” available only with tickets purchased in advance.

Pit passes will be $35 each day for DIRTcar and Devil’s Bowl Speedway members, $40 for non-members.

Rounding out the event will be the Blaine’s Motor Supply USA Limited Modifieds on each night.

For more information on the Texas Outlaw Nationals, click www.WoOSprint.com or visit www.DevilsBowl.com.