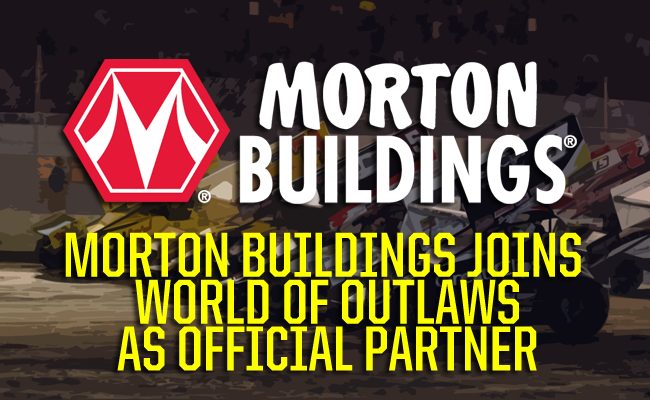 Will be the ‘Official Building of the World of Outlaws’

CONCORD, N.C. – Feb. 9, 2016 – Morton Buildings, a national leader in the construction of high-quality, long-lasting structures, has signed an agreement to become the ‘Official Building of the World of Outlaws.’

Since 1903, Morton Buildings has specialized in attractive, custom buildings for residential and commercial clients across the United States. With more than 100 construction centers in 43 states, Morton builds thousands of structures every year including farm buildings, garages, general storage buildings, airplane hangars, homes and churches.

“Morton Buildings is thrilled to team up with World of Outlaws for its Sprint Car Series and its Late Model Series,” Morton marketing manager Brian Haraf said. “We know our partnership is an outstanding fit and we share a common goal to deliver the best experience for fans of dirt track racing across North America.”

This season, the World of Outlaws Craftsman® Sprint Car Series will bring the ‘Greatest Show on Dirt’ to 93 scheduled events including the season opening DIRTcar Nationals at Volusia Speedway Park in Barberville, Fla. on February 12. The World of Outlaws Craftsman® Late Model Series, where ‘Every Night’s a Shootout’, features nearly 50 events across more than 30 tracks in the United States during the 2016 season, kicking off its season at Screven Motor Speedway in Sylvania, Ga. on February 12.

“It is exciting to be able to add a company like Morton Buildings, known nationwide for its high-quality product,” said Ben Geisler, World of Outlaws chief marketing officer. “Our fans from coast to coast include small business owners, farmers, racers and hobbyists and we are proud to help Morton Buildings showcase its products and increase its reach to the dirt track racing community.”

About Morton Buildings
Boasting top-of-the-line service as the industry leader in custom timber-frame construction, Morton Buildings constructs thousands of farm, equestrian, residential and commercial buildings in all sizes and styles each year. With more than 100 locations nationwide, Morton has nearly a half-million satisfied customers since its founding in 1903.