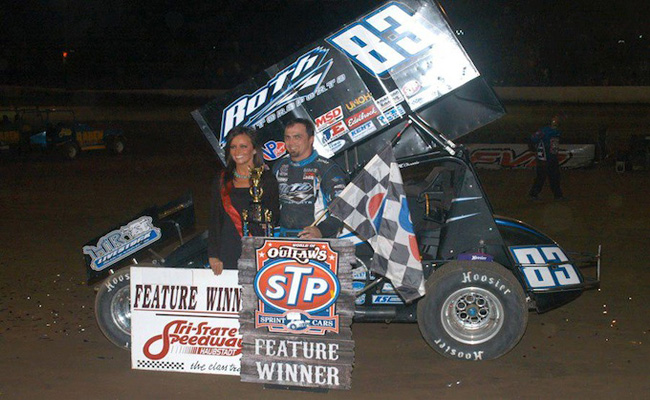 After putting up full-time World of Outlaws numbers in 2013 while only running a part-time schedule, Tim Kaeding, and Roth Motorsports are very excited to announce that they will again be on the road in 2014, but will in fact go after the 2014 World of Outlaws STP Sprint Car Series championship.

“I am very thankful for this opportunity that I have been given by the entire Roth Family, and team,” Kaeding said. “It’s been a life long dream of mine to run full time with the World of Outlaws, and this is a life changing moment for me.”

In a limited number of starts with the series in 2013, Kaeding and his Roth Enterprises/HR Livestock Transportation/3H Cattle team scored nine feature event wins, second most in the series, 26 top-five finishes, 34 top-10 finishes, and actually finished 14th in the standings.

“I’m ready to face the World of Outlaws,” TK continued. “We had a great year racing with them (WoO) last year, and being able to go full time with them in 2014 is amazing. There are not enough words to thank Dennis and Teresa Roth, and the entire Roth Motorsports family for this.”

With plans of running the tour coming together fast, finishing touches to the exact team that will hit the road with Kaeding are still being worked on, and a couple of new sponsors for this team are potentially in the works.

“This past season Tim Kaeding and that team put up some great numbers and were very competitive with the World of Outlaws,” Team Owner, Dennis Roth said. “As an organization we feel the timing is right to get back on the tour fulltime, and are excited for 2014.”

Stay tuned for future announcements of the finalized team, and sponsors that will hit the road with Roth Motorsports.

ON TAP: The Roth Motorsports team is busy preparing for the 2014 World of Outlaw season that kicks off in February in Florida.