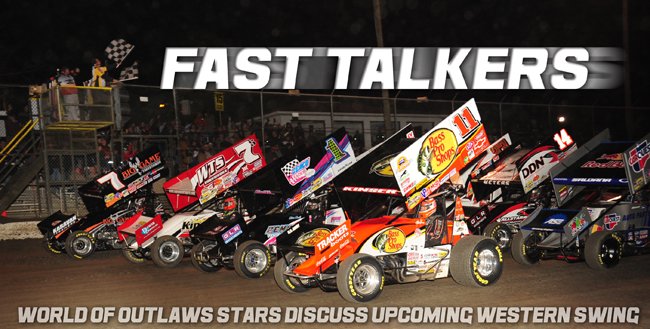 World of Outlaws competitors sound off below on the upcoming events as “The Greatest Show on Dirt” races into its biggest West Coast Spring Break in several years.

Craig Dollansky, #7 Big Game Treestands Maxim: “We haven’t been to Pike County in a while but it’s a track where you can do some pretty good racing. The last time I was there, I remember us being able to race a few different grooves and really put a good show on for the fans. We’re looking forward to going back there, and Royal Purple Raceway is a beautiful facility. It’s one of the nicer places we go to on the tour. It’s also going to be great to get to the shows out west. I love heading out to Las Vegas because the track is so wide and because it’s Vegas, who wouldn’t enjoy going out there and having a little fun?”

Ben Gregg, #2B Kronik Energy Maxim: “Well Pike County will be all new for us. Houston Raceway Park we ran last year and we really like that place. It reminds us a lot of our home track in Tucson. The shape and the configuration of it is something we think we can do well on. Vegas is a great, wide open half mile so that’ll be a lot of fun. As far as California goes, we haven’t hit too many of those tracks so it’ll be a different experience for us. We’ve had some good runs at Thunderbowl (Raceway) and hopefully we can repeat some of that.”

Chad Kemenah, #63 Golden Flavor Sesame Sticks Maxim: “Houston is a pretty racy race track. I’m starting to like the tracks out west more and more as we go out there because it’s a change of scenery for us. The tracks are a little bit more tacky than what we’re used to back in the Ohio area but we learn every time we go out there so I am looking forward to it.”

Steve Kinser, #11 Bass Pro Shops/J.D. Byrider/Chevrolet Maxim: “Pike County is a pretty racy track and we’ve always run well there. It’s a lot of fun to swing through that area of the country, and Houston is just such a great facility that it’s always a pleasure to run there. Vegas is a great place to run because it’s a big track and I usually do well on them. Same for Calistoga, I love that place. The other tracks are somewhat small and can be pretty tricky to get around. Usually on those deals, it becomes a bull ring and you never know what you might end up with, finish wise.”

Danny Lasoski, #33 Creason Pipeline Construction JEI: “Both of the two tracks are exciting and unique to race. Pike County is like two drag strips with paper clip turns tacked onto the ends of them. Houston is possibly one of the finest facilities that we race at. It’s two and three wide there all the time so it’s great. Going out west, you really get a mixture of tracks. There’s a big half mile at Vegas, then a tiny bullring at Chico and then you run Calistoga, which is the closest thing that California has to a Knoxville so it’s a lot of fun going there.”

Cody Darrah, #91 Great Clips Maxim: “I’m excited to head down there. I heard both Pike County Raceway and Houston are great places to race so I’m excited about getting the chance to race there. California is the polar opposite to what I grew up on. Going down to Australia really helped me get some seat time on the shorter tracks. I’m looking forward to going to Calistoga because it’s like what I grew up on so I think I’ll be able to get used to running there.”

Jason Meyers, #14 All Star Performance KPC: “Pike County is a place we haven’t been to in a while but I always remember us putting on a good show there so I’m looking forward to going back. Houston is just an awesome place to race. It truly is a great facility but we have struggled there so we are working on that. We really want to go down there, put on a good show for the fans and finally conquer the beast. It’ll be a great to see the old California swing back on the schedule. It’ll be great to be racing on tracks that I grew up on, and Vegas is always great. We won there last year and it’s just awesome for our sport to have two days in Vegas to take center stage for the fans and sponsors.”

Joey Saldana, #9 Kasey Kahne Racing Maxim: “Pike County is a great little race track and Royal Purple Raceway is hands down, one of the best places we go to race. I wished we got the chance to run there more often. You want people to turn out for that race so we need to put on a good show for the fans that do make it out. Both race tracks are awesome and very well suited for what we do. West coast racing is way different than the racing we do back in the Midwest and East Coast. That’s one thing I have learned driving with the Outlaws is that you have to adapt to different areas and styles of tracks. The West Coast can really make or break your season, that’s how crucial those races are. It’s important we learn as much as we can because we’re going to be going back there in September, hopefully in the thick of the title run. The notes and knowledge we collect now could make the difference on whether we are the champions or not.”

Donny Schatz, #15 STP/Armor All/Chevrolet J&J: “It’s been a couple years since we’ve been to Pike County. It’s a high-bank short track that’s a lot of fun every time we’ve gone there. Houston has been a lot of fun for us to go to over the years and they have a great facility there next to the drag strip. We’ve won at both places so we’re looking forward to getting back there and bringing home some more trophies.”

Jason Sides, #7s Wetherington Tractor Service Maxim: “Pike County is a pretty good little track and it’s only about four or five hours from our shop so we are looking forward to being close to home. We won at Houston last year so I’m definitely looking forward to going back there and seeing if we can repeat. We love Vegas. It’s a nice, wide open track so we’re always able to put on a good show for the fans. There’s a few of the California tracks that I haven’t been too yet so it’ll make things a little bit interesting. I know places like Merced and Calistoga are different breeds of track but we welcome the challenge and are glad that the Outlaws are spending a little bit more time in California.”

Lucas Wolfe, #5w Allebach Racing Maxim: “I’ve never raced at Pike County so that one will be a new experience for me. I’ve been to Royal Purple Raceway before a few times and it’s obviously a beautiful facility and is usually is one of the best races of the year. It’s a highlight of the early part of the year. There’s going to be a lot of tracks out west that I haven’t been to yet so we’re going to have to work hard to make sure we can make our 5W fast. The best thing about it is the fact that we can spend a great deal of time out there and really learn the tracks and start the season off right.”

• For tickets to the events at Pike County and Royal Purple Raceway, click here for SLS Promotions, or call 815-344-2023.

• Click here for tickets and information for the two-day Las Vegas World of Outlaws Nationals Presented By J.D. Byrider, or call Las Vegas Motor Speedway at 800-644-4444.

• For tickets to events at Silver Dollar Speedway, Merced Speedway or Calistoga Speedway, go to WorldofOutlaws.com/tickets or call 704-795-7223.

• Click here for information about the event at Giant Chevrolet Kings Speedway, or call 559-584-7223.