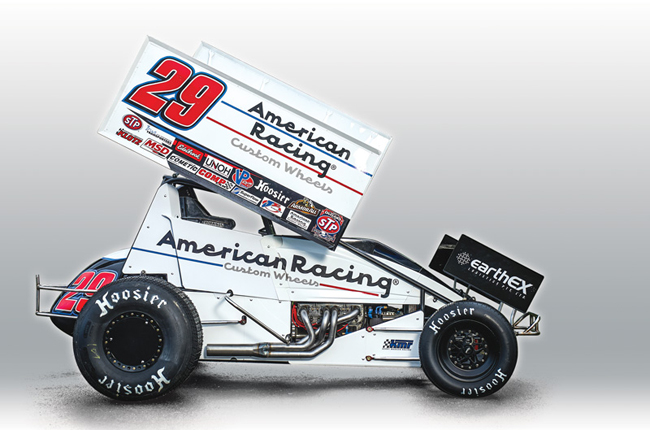 CONCORD, N.C. — Oct. 24, 2013 — The World of Outlaws World Finals is one of the biggest dirt racing events on the planet and American Racing Custom Wheels is excited to sponsor World of Outlaws STP Sprint Car Series star Kerry Madsen in the three-day event Nov. 7-8-9 at The Dirt Track at Charlotte.

Like American Racing, Madsen, of St. Marys, New South Wales, Australia, is known to push the envelope and drive his Keneric Racing car to the edge. It’s how he earned three victories and 36 top-10 finishes this season competing from February to November with the toughest racing series in the world.

“Kerry and the Keneric Racing team are a great match for our American Racing Custom Wheels brand,” said Dan Ricehouse of Wheel Pros. “We’ve watched him race all year and he definitely represents the focus of being competitive, always pushing as hard as he can for a win. The whole Keneric operation is first class and we can’t think of a better way to wrap up our first season of working with the World of Outlaws than partnering with them at the World Finals.”

“We are proud of our team and our professional approach to competing on the World of Outlaws circuit,” said Keneric Racing’s Peter Gavranich. “Partnering with American Racing at the World Finals is very exciting for us. We have run well at Charlotte in the past and we are excited to finish off 2013 on a high note.”

The World of Outlaws World Finals will be broadcast in two three-hour shows airing at 9 p.m. ET on Sunday, Dec. 15, and Sunday, Dec. 22, on CBS Sports Network.

American Racing is an iconic brand and a wheel industry leader in craftsmanship, engineering, innovation and performance. Founded in 1956 as a manufacturer of bespoke magnesium and aluminum racing wheels, its roots date back to the golden era of hot rodding. American Racing is a Wheel Pros brand. Wheel Pros products are sold worldwide in more than 20 countries on four continents and through a U.S. network of more than 25,000 authorized dealers. It is one of the world’s largest suppliers of branded custom wheels, performance tires and related accessories for cars, SUVs and light trucks