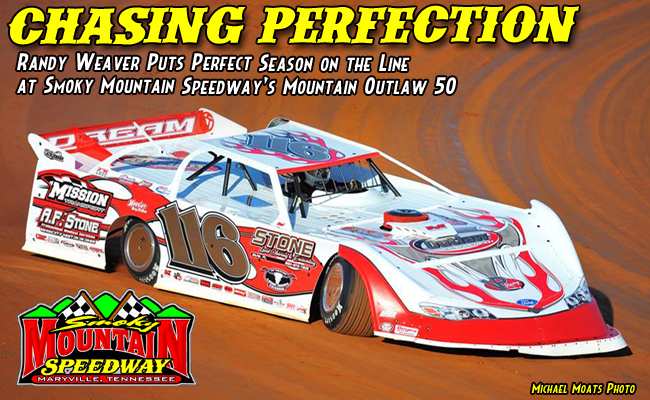 MARYVILLE, Tenn. – May 7, 2015 – Perfection will be on the line Saturday night at Smoky Mountain Speedway.

After starting the season with eight victories in eight races, veteran regional racer Randy Weaver, 45, of Crossville, Tenn., will attempt to add a national touring victory to his remarkable early-season win streak when the World of Outlaws Late Model Series visits Smoky Mountain for the third annual Mountain Outlaw 50 Presented by NAPA.

“With the way we’re running I really can’t wait for the Outlaws race this weekend,” said Weaver, who has scored two of his eight wins in regional series action at Smoky Mountain’s 4/10-mile oval. “We’ve got a really good car with a good package for Smoky Mountain. I know the streak’s gonna end sometime, but I’m gonna do everything I can to keep it going.”

Weaver’s start to the season has been nothing short of amazing. With victories at seven different tracks and spread between four different regional tours, Weaver has proven not only his strength but also his versatility on his way to racking up a whopping $58,000 in race winnings.

His biggest score during the streak earned Weaver a career-high $20,000 with the Georgia-based Ultimate Super Late Model Series in his first visit to Virginia Motor Speedway.

“The biggest thing to me is that it’s been at so many different venues,” said Weaver, whose Outlaw Racing Southeast team fields a Cornett-powered Longhorn Chassis. “Some of the tracks we’ve been to quite a bit and some we’ve never even been to. Tracks in several different states and with several different series with all different kinds of competitors. That’s the coolest thing about it to me is just how consistent we’ve been no matter where we’ve raced at or who we’ve raced against.

“It’s pretty amazing really. Sometimes, I just sit and shake my head at it. You don’t really even dream about having a streak like this because it’s something that just never happens.”

While his winning streak may already have reached unbelievable status, it could become even more incredible if Weaver is able to add a World of Outlaws victory to his ledger on Saturday night.

For all that the veteran racer has accomplished in his more than two decades of racing – he has more than 350 career victories and is a three-time Southern All Star Series champion – Weaver has never won a national touring event. Checking that achievement off his list with his first WoO LMS victory would make his current win streak all the more satisfying.

“It’d be great to win this weekend not just to add to the streak but to add to my resume,” said Weaver, whose previous best WoO LMS performance was a third-place finish at Volunteer Speedway in Bulls Gap, Tenn., in 2007. “We’ve won some big races, but winning on a national tour like the World of Outlaws is something I’ve always wanted to do

“We’ve led a few of those races, but it always seems like something crazy happens. If I race my whole life and never win one, I’ll still be happy with what I’ve accomplished, but yeah, it would be nice to win one before I’m done.

“I don’t know if it puts you in a different league than what you were before winning one, but it definitely would be satisfying for me personally to finally win one. I think it would show just how hard our team has worked and how far we’ve come after all the time we’ve put in over the years.”

A streak as phenomenal as Weaver’s would be special for just about any driver at any point in a career. But for Weaver, the current run of success comes at a particularly meaningful time following the death of his father Glen, who passed away from pancreatic cancer in November.

“This year’s in memory of my dad,” Weaver said. “I wish he could’ve been a part of this, but I’ve got a pretty good reason to drive me harder this year more than ever. We’ve been really blessed to make it a real good year for him so far, but getting that first Outlaws win would make it even more special.”

With his team operating in top form and the Outlaws headed to one of his best tracks in Smoky Mountain, Weaver knows Saturday’s race could be the best chance he’s ever had at finally breaking through for his first WoO LMS victory. But even a driver who has a run of perfection as long as Weaver’s knows nothing in racing is a sure thing.

“This is probably the best I’ve been running going into one of these races, but that really doesn’t mean anything,” Weaver said. “We’re gonna give it our best shot and see how everything shakes out, but you never know when you’re racing against this good of competition. But we’ll do our best and maybe by the end of it we’ll still be perfect.”

Located roughly 30 miles south of Knoxville on the western edge of the Great Smoky Mountains, Smoky Mountain Speedway has a long history of short track racing. Built originally as a half-mile dirt oval more than 50 years ago, the track spent time as an asphalt oval before being converted back to dirt in the 4/10-mile configuration it has now.

Smoky Mountain has hosted two WoO LMS events with one more scheduled event being rained out. The track’s first WoO LMS race came in the national tour’s first season under the World Racing Group banner in 2004, with Rick Eckert of York, Pa., claiming the victory.

When the WoO LMS made its return to Smoky Mountain in 2013, current series points leader Shane Clanton of Zebulon, Ga., was the winner after holding off a late challenge from Steve Casebolt of Richmond, Ind. Last year’s WoO LMS date at Smoky Mountain was rained out.

Pit gates open at noon with grandstands and tier parking gates opening at 3 p.m. The drivers meeting is scheduled for 7 with on-track action to follow. Support division racing features a $1,500-to-win event for Crate Late Models and a $750-to-win sportsman division program.

More information on Smoky Mountain Speedway and the Mountain Outlaw 50 Presented by NAPA is available on the track’s website at www.smokymountainspeedway.com.

Listen to live audio from Ponderosa’s WoO LMS event for free on www.DIRTVision.com. Results throughout the evening will be posted to the Official World of Outlaws Late Model Series website at www.WoOLMS.com.

Further updates and photos from WoO LMS events are posted on the Official WoO LMS social media pages on Twitter atwww.Twitter.com/WoOLateModels and Facebook at www.Facebook.com/WorldofOutlawsLateModelSeries. Check out the latest videos on YouTube at http://www.youtube.com/WorldofOutlaws.