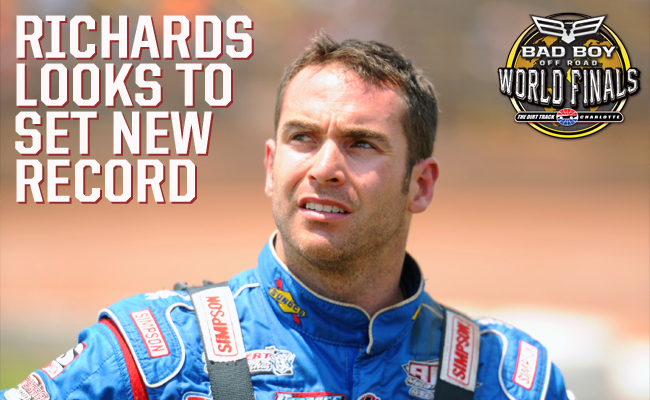 With his fourth championship all but locked in, Richards looks to single-season wins record

CONCORD, N.C. – Oct. 27, 2016 –  The World of Outlaws Craftsman® Late Model Series Championship is all but locked in before the final event of the season, the Bad Boy Off Road World of Outlaws World Finals, which starts this afternoon and runs through Saturday. With a 270-point lead, Josh Richards need only sign in at the event to earn his fourth championship. But that won’t stop him from trying to score a win, as he faces yet another challenge before him this weekend: to break the single-season wins record.

“I just love to race, and to be able to be in contention to win races. It’s been a dream season to say the least,” said the Shinnston, W.V. driver, as he contemplated his 2016 season. “I could not be more thankful for everyone involved. You know, I never would have seen the season we had. It took some time but, really, it couldn’t have gone any smoother, and I couldn’t be happier with our success as a team. To see our guys have faith in us, and have new cars and go out and perform really well — that part is as rewarding.”

In 2013, Richards recorded an excellent season, winning a series championship with a then career-best 10 wins. He then took a leave of absence for race-related injuries in 2014.

In 2015, Richards made his comeback but fell short, finishing second in points with nine victories. According to Richards, last season was a matter of re-adjusting to the grind and getting back into the rhythm of racing weekly nationwide. It was not that his Valvoline/ Seubert Calf Ranches Rocket team did not have direction; they were just testing an assortment of new setups on an updated car. And from the looks of it, those new setups have paid off.

Richards claims there has not been a time this season when he has felt uncomfortable. Everything finally fell into place. In and out of the series he has 26 total wins, 50 top fives, 57 top 10s, and 11 fast time awards this season. Within the World of Outlaws Craftsman Late Model Series, he has recorded a top-10 finish in all but two series races.

“We got beat last year, so it makes you realize how special it is to win, to be the guy on top,” Richards said. “I guess it’s our fourth one, but it’s not less special than the first one. I remember how emotional I was when I won the first one – the excitement, joy and happiness. It was a dream of mine to be a champ someday, and to have everyone stand behind me from the get-go meant a lot to me.”

Richards established the single-season win record in 2011, only to see it bested the following season, and again later. Now, he has already tied the latest record set by Darrel Lanigan in 2014, when Richards wasn’t even racing. Richards’ single-season mark is just one shy of breaking the record, and he will have two chances to break the tie on Friday and Saturday.

“Everyone’s been working all year, trying to get better,” Richards said. “It comes out all at the last race of the season. But Thursday is very important, trying to get two good qualifying laps in that’ll set you up for the weekend. Track position is important anywhere, but especially with this track. Qualifying does set you up for the weekend. We have to be fast right out of the box.”

“There are other big events,” said Richards. “You have King’s Royale for Sprint cars, The Dream and Dirt Track Championship with us [Late Models], and Super DIRT Week with the Modifieds. There are big events, but to bring everyone together in one place to wrap up the year is pushing it beyond those limits. It’s such a grand a wonderful event to be a part of.”

Racing action begins tonight at the Bad Boy Off Road World of Outlaws World Finals and runs through Saturday. Tickets can be purchased online or at The Dirt Track at Charlotte.

If you can’t make it in person, watch LIVE on DIRTVision.com.