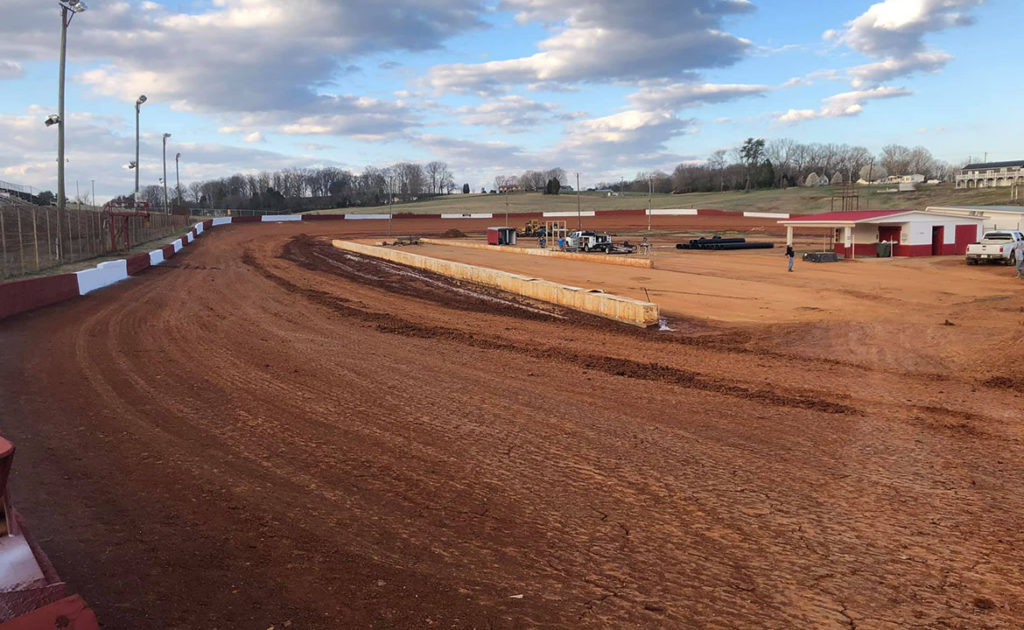 MARYVILLE, TN – The results of a major improvement project at Smoky Mountain Speedway will greet fans and racers on Saturday, March 9, and everybody from track ownership to local hero Jimmy Owens is excited to see what happens when the World of Outlaws Morton Buildings Late Model Series rolls into town.

As part of a two-day, double-header weekend in Tennessee, the Outlaws will make their return to Smoky Mountain for the sixth annual Tennessee Tipoff. This year, the pot is a bit sweeter as $12,000 awaits the winner of a 60-lap battle around the newly resurfaced and slightly reconfigured 1/2-mile. Track personnel couldn’t be happier to kick off its racing season with “The Most Powerful Late Models on the Planet,” and its home-state drivers are ready to do well in front of their loyal fans.

Improvements to the entire facility have been building steadily, with an updated scoring system, scoreboard and scale house installed individually over the past several years. More recently, a new grandstand concession building and track tower were constructed for the start of the 2017 season. Still in the plans for this season are new spectator restrooms and a pavilion area.

The Smoky Mountain surface might be the most impressive and challenging undertaking the track crew was able to improve. Formerly a high-banked and narrow-cornered course, track owner Roger Sellers oversaw a resurfacing that de-banked the corners by roughly six degrees and widened them out in an effort to create “better, hopefully, side-by-side racing.”

In previous seasons, all traffic entered and exited the racing surface through a single on/off gate in turn one. This year, a second gate in turn two has been added, acting as an on-ramp to compliment turn one’s new off-ramp duties, in an effort to speed up the show.

All-new heavy equipment has also been added to the list of tools at their disposal, including two new tractors, rollerblades, a new water truck, box rake and sheepsfoot roller. All things considered, the track will be firing on all cylinders come race day.

For a track that does not host weekly racing competition, no expense has been spared in the effort to improve both the fans’ and the drivers’ experience at any of the races on the special event-based schedule. Many of whom have been giving suggestions from their perspectives.

“We’ve got fans and drivers alike giving us ideas,” said track GM Casey Moses. “We’re taking all those into our notes. Little by little, we’re doing a lot.”

Sellers had previously owned Tennessee RV, the state’s largest RV dealership, before selling the company to Lazydays RV of Knoxville in December. Now at the helm of his racetrack ownership, Roger said he’s just looking to improve both the fans’ and drivers’ experience when they come to his place to race.

On the subject of the race itself, the competition will be fierce again this year, as multiple regional and other national drivers are expected to come into town to do battle against the Outlaws, including Scott Bloomquist, Dale McDowell, Chris Ferguson, Shannon Buckingham, Donald McIntosh and Vic Hill, among others. One outsider in particular, home-state hero Jimmy Owens, is also ready to get back into the groove, just one-and-a-half hours away from his hometown of Newport, Tennessee.

“I’m really looking forward to it,” Owens said. “It means a lot when these track owners and promoters invest their time and money into something to make it just a whole lot better facility, so we can put on a lot better show for the fans.”

When asked about the pressure of performing well in front of a home-state crowd, some drivers would say it has no effect on their composure or the way they approach things on race day. But “The O-Show” actually wasn’t ashamed to admit he feels a bit of added pressure to do well in front of his friends and family that make the trip out to see him race so close to home.

“I feel like it’s a little more pressure in front of all my hometown guys,” Owens said. “Lots of friends and family coming to watch because we’re so close and you really want to perform well for those guys, so it’s way more nerve-wracking running at home than it is at Eldora, for example.”

Owens also joked about the luxury of not having to worry about points standings for the weekend, saying “Oh heck yeah, I’d give anything not to have to points race anymore.”

“Just running local, picking and choosing, being home an hour and a half later after the race is always good to do,” Owens continued. “But that whole getting done after the races and having to drive six or seven hours to get back home, that gets pretty old after a few years.”

Come and see “The Newport Nightmare” and all of the Outlaws next weekend, or watch every lap LIVE on DIRTVision with your Late Model Fast Pass!

For additional information, contact Smoky Mountain Speedway at (865) 856-8989 or visit the track homepage.