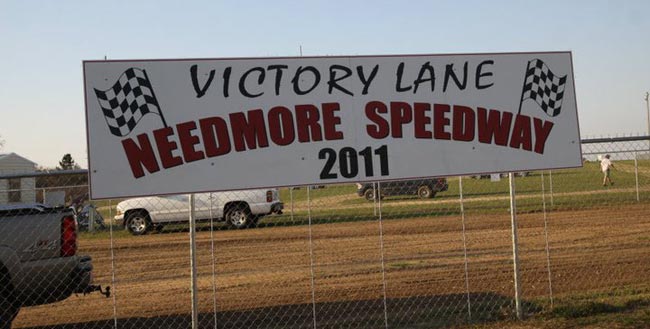 “I’m excited to bring the Outlaws in,” said Hunnicutt, who operates one of the newest dirt tracks in the Southeast. “I hope the race will help put the track on the map. We want to take this and build off it.”

The richest, most talent-laden dirt Late Model program in Needmore Speedway’s short history will cap a whirlwind 21-month span for Hunnicutt, an unexpected track owner if ever there was one. He was not especially interested in racing while growing up, but when his teenage son, Austin, expressed a desire to drive a race car, Hunnicutt began a steady climb into the sport.

First there was a race car for Hunnicutt’s son, a machine for Austin to run in events under the National Late Model Series banner. Then in June 2009 Hunnicutt, looking for a way to get his son more practice laps, decided to cut out an oval dirt track on a portion of the 700-plus acres on which he farms cotton and peanuts. A few months later he heard talk indicating that there might be enough interest in the southern Georgia to support a track, so he jumped all-in and began the process of turning his practice oval into a full-fledged, ready-for-business speedway.

After several months of construction, Needmore Speedway’s gates were opened last year for the first time in August. The night’s action was ultimately rained out, but Hunnicutt said more than 4,500 fans and 135 race cars turned out for the lidlifter – proving to him that yes, this racetrack on his property just might work out after all.

“It’s definitely been more work than I ever could have imagined,” said Hunnicutt, who opened his track’s 2011 season two weeks ago. “But everyone’s working hard at it and we’ve gotten a lot of support for what we’re doing. We’re new to this, but we’re learning fast.”

A three-eighths-mile, semi-banked oval sporting 90-foot-wide turns, Needmore hosted a handful of events during the final months of 2010. None of them quite matched the magnitude of this Sunday night’s WoO LMS show, which will introduce a group of the dirt Late Model division’s top stars to a new track and is expected to draw a huge crowd to the speedway.

Needmore will be neutral ground for virtually all Sunday’s entrants, including the trio of WoO LMS followers who hail from Georgia, Shane Clanton of Fayetteville, Clint Smith of Senoia and 2011 Rookie of the Year contender Brian Reese of Sharpsburg. None of the drivers have ever visited the track, though they will certainly have plenty of built-in support from their home state faithful.

In addition, Billy Moyer of Batesville, Ark., a three-time WoO LMS champion who leads the tour’s points standings entering this weekend’s action but is not planning to follow the entire schedule, confirmed on Wednesday that he plans to compete in this weekend’s WoO LMS tripleheader that includes Needmore and events on Fri., March 25, at Ocala (Fla.) Speedway and Sat., March 26, at Screven Motor Speedway. He will be joined at all three events by Henderson Motorsports teammates Leon Henderson of Laurel, Miss., and David Breazeale of Four Corners, Miss.

Needmore Speedway’s gates are scheduled to open at 1 p.m. on Sunday and hot laps are slated to begin at 4 p.m.

General admission is $25 (children 10-and-under will be admitted free of charge), and pit passes will be $40.

Needmore’s local Limited Late Model, Super Street and 4-Cylinder divisions will also be in action during the evening.

Needmore Speedway is located at 1060 John Vickers Rd. in Norman Park, Ga. It sits less than eight miles off Interstate 75 and about 50 miles north of the Florida border.

More information on Sunday’s event is available by logging on to www.needmorespeedway.com or calling the track office at 229-769-5611.