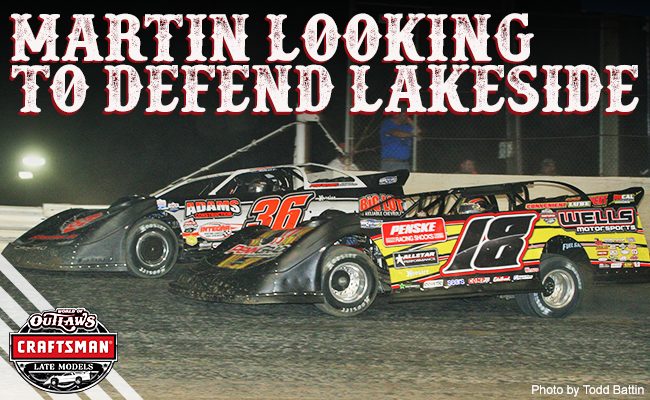 CONCORD, NC— Sept. 21, 2017—The World of Outlaws Craftsman® Late Model Series returns to action after an 18-day break from sanctioned events. Three races lie ahead for the Series this coming week as they invade Kansas and Oklahoma for the first, and only, time of 2017.

The three-day jaunt kicks off on Friday, Sept. 22 at Lakeside Speedway in Kansas City, KS. Only three Super Late Model events appear on the track’s schedule this season, so witnessing the 800 H.P. machines thunder around the 4/10-mile semi-banked dirt oval will be a real treat for the fans.

Young-gun Logan Martin of West Plains, MO is the most recent winner of a Super Late Model event at Lakeside Speedway. According to the track’s report, Martin held off charges from Jesse Stovall, Rodney Sanders and Terry Phillips, as well as Chad Simpson and Kansas-native and former full-time Outlaw Chase Junghans (2014 and 2015).

“I’ve raced Modifieds at Lakeside since 2013, and we were able to win the 2015 USRA B-Mods Nationals and placed sixth in the Modified Nationals there,” said Martin. “I didn’t get to go there at all last year, and the MLRA event this year was my first time back. The track characteristics are pretty much the same as far as how the track changes throughout the night, but the cars do drive a little bit different because a Late Model is a little more right-front dependent.”

On Tuesday, Martin celebrated his first full year sitting behind the wheel of a Late Model. His former experience was in regional Modified races. Although Martin doesn’t have much experience in a Late Model he believes his knowledge of the track will carry over.

“Lakeside is really cool how the track changes. It gets right up against the wall, but you can also get right back down on the tires. It usually has two, three, four different grooves you can run into a corner to try to catch speed,” said Martin. “It’s awesome to be going there and taking on the Outlaws. Not to be cliché, but it really is a treat to be able to run with the national guys whenever they come around. They obviously are really good, and it doesn’t take them long to adjust, but I’m a believer in the more laps the better. That might hurt us the next night when we head up to Salina since I’ve never been there.”

Martin has entered one Series event this year at I-55 Raceway for the Outlaws vs. Summer Nationals event. He landed Quick Time early in the night but settled for a 12th place run during the Feature.

“We don’t get many opportunities to race with the World of Outlaws, so we always try to take advantage of it whenever they are close. You can only get better by going against the best competition, and the World of Outlaws definitely provides that,” said Martin.

Martin hopes to defend one of his favorite tracks this weekend from Brandon Sheppard, Chris Madden, Shane Clanton, Rick Eckert and other Outlaws by parking his Rocket XR1 in Victory Lane.

“Hopefully we learn from our mistakes at I-55 and can carry it out at Lakeside this weekend,” said Martin. “We race a regional schedule, so it’s always fun to see the regional guys back up against the national guys. When I used to go as a fan to watch the races I would always cheer fort the regional guys, so we will have to see if I can carry it out at Lakeside and on into Salina that next night.”

The World of Outlaws will have back-to-back nights of 50-lap $10,000-to-win action at Lakeside Speedway on Friday, Sept. 22 followed by Salina Highbanks Speedway in Salina, OK on Saturday, Sept. 23. The weekend will wrap up in Wichita, KS at the historic 81 Speedway. Tickets for all three races are still available.