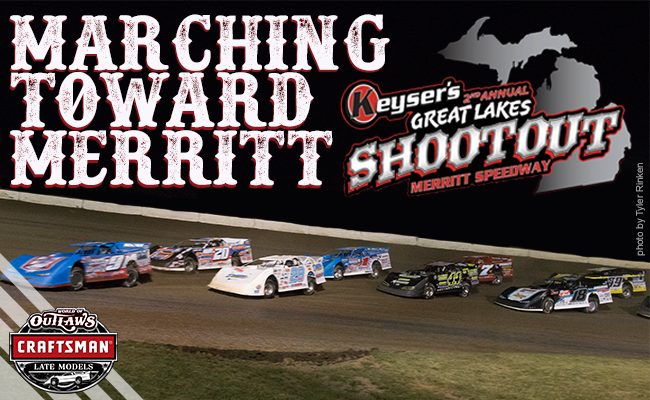 CONCORD, NC— Aug. 3, 2017— The World of Outlaws Craftsman® Late Model Series will invade Merritt Speedway for back-to-back shootouts to cap off the month of August.

The Series stop in Michigan for the Keyser Manufacturing Great Lakes Shootout is their only appearance in the state during the 2017 season. It is also the stomping grounds of some of their toughest competition around the country.

Last year, hometown hero Eric Spangler was able to fend off the big dogs to claim his first-ever Outlaw victory after a hard-fought 25 laps. Nick Kurtz, another Merritt regular, finished second in front of Josh Richards. The 2016 Rocket1 driver took what he learned during the 25 laps and applied it one night later during the 50-lap finale to claim his 17th Series win of the season, which placed him tied for the most victories in one season.

“These locals are just tough watching them,” said Richards after his third-place finish. “They know how to get around this track. It’s so different than what we’re used to. It’s so small… They were doing a great job.”

After 50 laps a third-place finish behind Richards and Overton was basically a win in Rich Neiser’s book: “I represented Michigan the best I could and, as far as I’m concerned, I won the thing.”

Tough local competition vying to defend their home turf from the Outlaws has been a reoccurring theme throughout the years.

During the Outlaws’ appearance at the 3/8-mile track in 2013 Spangler finished second behind Tim Fuller. The pair started side-by-side for the feature in row seven. Impressively, they both passed more than 12positions by the final lap, which goes to show just how racy Merritt Speedway can be.

After his second-place finish in 2013 Spangler said, “It was a good time – an amazing time. I was thrilled just to be racing for a win in a World of Outlaws race. That’s probably why I bumped the (inside) tires a couple times here and there. I was getting a little too excited and was missing my marks just thinking, I can’t believe where I’m at right now.”

Spangler currently sits first in Merritt Speedway track standings by 59 points over fellow track regular Andrew Terrill. The pair – along with additional track regulars such as Brandon Thirlby, Dona Marcoullier, Neiser, and Kurtz – are sure to be at the top of the list of locals to beat when the Outlaws roll into Lake City, MI for the two-day show on Aug. 26-27.

Although the locals are tough, the World of Outlaws Craftsman Late Model Series are hard to beat at any given track around the nation. With 29 races in the books for the 2017 season, the Outlaws have been able to take the loot and the title of fastest guys in town 24 times.