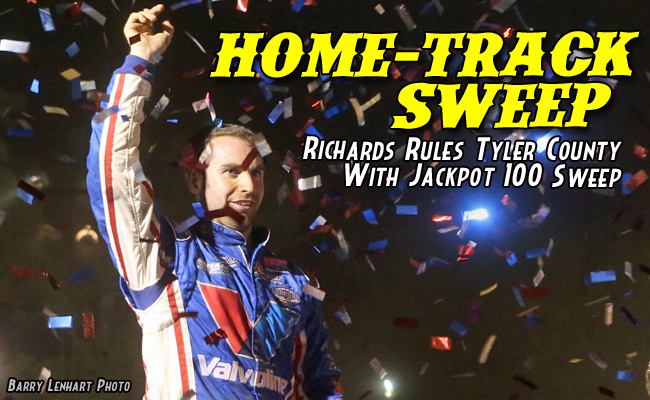 MIDDLEBOURNE, W.Va. – May 24, 2015 – A trip to his home track was just what Josh Richards needed to get his season headed in the right direction.

One night after scoring his first victory since February, Richards, 27, of Shinnston, W.Va., drove his Valvoline-sponsored Rocket Chassis house car back to victory lane again on Sunday evening after completing a sweep of Tyler County Speedway’s Jackpot 100 Weekend. The three-time World of Outlaws Late Model Series champion topped a tight back-and-forth battle with Brandon Overton of Evans, Ga., and Chub Frank of Bear Lake, Pa., in the second half of Sunday’s Jackpot 100 finale and pulled away to earn his third WoO LMS victory of the season.

“That must have been a good race for the fans,” said Richards, who started fourth in Sunday’s main event and trailed just behind the lead battle between Overton and Frank before taking charge for the final 12 laps. “Tonight was more finesse and trying to figure out where you needed to be. I feel like once I started moving around we started gaining on them guys and just kept getting better.”

The Pole-starting Frank settled for second after twice leading the race. He narrowly edged WoO LMS points leader Shane Clanton of Zebulon, Ga., who advanced from his sixth starting spot to finish third. Chase Junghans of Manhattan, Kan., recorded his best WoO LMS finish of the season in the fourth spot while Overton faded to fifth after leading the majority of the race’s 60-lap distance.

Much of the race featured side-by-side racing throughout the field, with the most exciting battle seeing Overton and Frank going back and forth with Richards lurking just behind and Junghans and Clanton also entering the mix at times.

Overton’s high line allowed him to keep just ahead of the low-running Frank, save for two occasions when Frank pulled ahead in traffic. Overton rebuffed each of Frank’s challenges, but he was no match for a hard-charging Richards in the final 15 laps. After clearing Frank for second on lap 42, Richards tracked down Overton by lap 45 and rolled passed the WoO LMS rookie contender amid heavy traffic on lap 48.

“The traffic was a little hairy,” said Richards, who for the second straight night used a late pass to deny Overton his first WoO LMS victory. “They didn’t really know where to go and they were racing for position too. It’s always tight racing here at this track. You just don’t want to make the wrong move and get stuck behind somebody.”

Frank moved by a badly fading Overton on lap 50 and began closing the gap to Richards until the leaders cleared lapped traffic with five laps remaining. Richards cruised from there, pulling to an advantage of 1.879 seconds by the time he took the checkered flag.

In settling for second in his Sorbera Family Chiropractic-sponsored Longhorn Chassis, Frank fell just short of claiming his first WoO LMS victory since 2009.

“The fans got their money’s worth,” said the veteran Frank, who notched his fifth top five finish of the season. “Brandon and I had a heck of a race going on there and Josh snuck in there. All three of us were racing hard. I don’t know what was going on behind us, but it was definitely exciting in that traffic.”

After driving his Weldbank Energy Capital house car entry into the top five early in the race, Clanton struggled to keep pace with the leaders until making a late charge. But his run to the front came up short as he finished behind Frank in a side-by-side finish for second.

“We needed another 10 laps,” Clanton said. “We really got to coming them last 10 to 15 laps. We just started a little too far back. But we had a fast car and had a good weekend, so we’re happy.”

Third-starting Jared Hawkins of Fairmont, W.Va., finished sixth after battling among the top five for much of the race, while Tim McCreadie of Watertown, N.Y., charged from the 23rd starting spot to finish seventh. Chris Ferguson of Mount Holly, N.C., was eighth with 15th-starting Darrell Lanigan of Union, Ky., ninth and 16th-starting Morgan Bagley of Longview, Texas 10th.

The race was slowed by only one caution, which appeared with 21 laps complete when the lapped machine of Kyle Thomas of Pennsboro, W.Va., got caught in the middle of a top-five battle between Clanton and Hawkins and ended up going for a spin in turn four.

2015 World of Outlaws Late Model Series Point Standings as of May 24 – 16 A-Mains completed (rank/driver/points/deficit to leader):