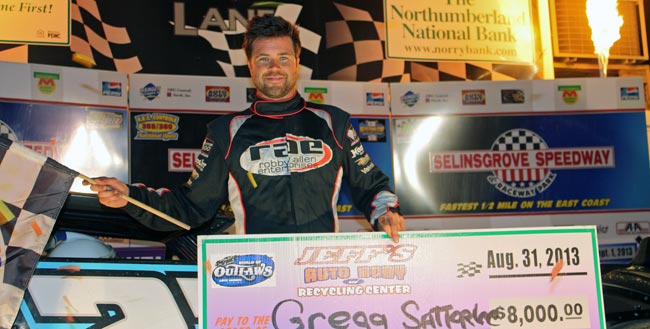 SELINSGROVE, PA – Aug. 31, 2013 – It took Gregg Satterlee 85 tries to break into Victory Lane on the World of Outlaws Late Model Series. He needed just five more starts to make his return to the national tour’s most exalted spot.

Almost exactly one month after registering his first-ever WoO LMS A-Main triumph Satterlee was back in the spotlight, rolling to a convincing win in Saturday night’s 40-lap ‘Showdown On Sand Hill’ at Selinsgrove Speedway.

Satterlee, 29, of Rochester Mills, Pa., was unbeatable in the opening leg of the inaugural WoO LMS doubleheader at the historic half-mile central Pennsylvania oval. He passed defending circuit champion Darrell Lanigan of Union, Ky., for the lead on lap 17 – a moment before Lanigan slowed with an overheating engine – and dominated the remainder of the distance to cash an $8,050 first-place check.

“I would’ve never thought we would’ve got one again this year,” said Satterlee, whose milestone first WoO LMS victory came on July 30 at Shawano (Wis.) Speedway. “It always hangs in the back of your mind – that once you get (a win), you can do it again – but I never would’ve dreamed that we would do it again this soon. This is just awesome.”

Vic Coffey of Caledonia, N.Y., finished a distant second, flashing under the checkered flag 2.203 seconds behind Satterlee. The performance allowed Coffey to match his career-best WoO LMS finish as his frustrating winless streak on the circuit reached 157 A-Mains.

Jeff Rine of Danville, Pa., placed a solid third, giving the eight-time Selinsgrove Late Model champion a career-high finish on the WoO LMS. Josh Richards of Shinnston, W.Va., steadily advanced from the eighth starting spot to finish fourth – and more importantly, push his advantage in the standings to 94 points over ninth-place Shane Clanton of Zebulon, Ga. – and Rick Eckert of York, Pa., finished fifth at the track where he ran his first dirt Late Model event nearly three decades ago.

Satterlee, who started second, led the race’s first lap before being overtaken by pole-starter Lanigan. But Satterlee didn’t let the tour’s alltime winningest driver pull away and was in position to grab the lead with an inside move off turn two on lap 17.

“I knew after those first couple laps I could hang there right with (Lanigan) running the same line,” said Satterlee, who drove his father’s Roush Yates Ford-powered Rocket car. “I started running a lower line there in lapped traffic and was able to sneak by him. After that I wasn’t really sure where to go – I didn’t really know how close anyone was – but I guess what I was doing worked out.”

Indeed, there was no catching the fleet Satterlee. After Lanigan slowed on lap 17 to bring out the race’s lone caution flag, Satterlee simply drove away from his nearest challengers with every circuit around the sprawling track.

“These big tracks just seem to fit our driving style,” said Satterlee, whose three victories over the past month have come at spacious half-mile ovals. “We’ve just been clicking on the big tracks lately.”

Coffey, 42, chased Satterlee to no avail after passing Rine for second place on lap 18. The former WoO LMS Rookie of the Year fell as many as three seconds – nearly a full straightaway – behind the leader until Satterlee’s late-race dealings with lapped traffic slightly cut the final gap.

“We didn’t change much (after heat racing), but the change we did make made me too tight to run the bottom of the track,” Coffey said of his Sweeteners Plus Rocket car. “I don’t know if it was gonna be any good down there anyway because the top just carried so much speed, but I couldn’t run where I did in the heat race. I had to get to the top and just kind of run Gregg’s line, and at that point he was a little better than us. Unless he had problems, I knew we had a second place car.

“It’s frustrating to come close (to a win) again, but we had a good night. If we can keep running near the front like this that win will eventually come.”

Rine, 36, fell short in his bid to score an emotional win in front of his loyal fans, but the best performance of his career in WoO LMS competition was enough to pump him up.

“I’m happy standing right here in third,” said Rine, who started fifth and moved up to second after Lanigan dropped from contention on lap 17. “To race with these guys and to finish third with these guys at our hometrack is just awesome.”

Tim McCreadie of Watertown, N.Y., started and finished sixth, but he spent most of the race’s second half running fifth until Eckert slipped by. Young Selinsgrove regular Matt Cochran of Williamsport, Pa., placed seventh driving a ‘Club 29’ Rocket car assembled by Lanigan. Dan Stone of Thompson, Pa., finished eighth; Clanton was a quiet ninth; and Bryan Bernheisel of Jonestown, Pa., rounded out the top 10.

Lanigan, who led laps 2-16, pitted after slowing on lap 17 so his crew could tend to his car’s steaming powerplant. He returned without losing a lap but later retired, absorbing a rare DNF.

Thirty-five cars were entered in the program, which was run under a threat of rain.

Rine turned the overall quickest lap in qualifying, clocking in at 19.226 seconds during Group ‘A’ to earn his second career WoO LMS fast-time honor.

Heat winners were Rine, Richards, Satterlee and Coffey. The B-Mains were captured by Jim Bernheisel of Lebanon, Pa., and Jim Yoder of Selinsgrove, Pa.

The holiday-weekend WoO LMS spectacular at Selinsgrove Speedway concludes on Sunday night (Sept. 1) with the running of the 50-lap Late Model National Open for a $10,000 top prize. Hot laps are scheduled to begin at 7 p.m.

SELINSGROVE, PA – Aug. 31, 2013 – The World of Outlaws Late Model Series is set to begin a doubleheader weekend at Selinsgrove Speedway with tonight’s ‘Showdown On Sand Hill’ featuring a 40-lap A-Main paying $8,000 to win.

A historic half-mile fairgrounds oval in the heart of racing-rich central Pennsylvania, Selinsgrove is hosting the WoO LMS for the first time this weekend. The track was on last year’s schedule but thunderstorms washed out the late-August event.

10:15 p.m. – One month after earning his first-ever WoO LMS triumph in Wisconsin, Gregg Satterlee shined again on Saturday night — this time in his home state.

Satterlee grabbed the lead from Darrell Lanigan on lap 17 — moments before Lanigan slowed with an overheating engine — and dominated the remainder of the distance to capture the 40-lap ‘Showdown On Sand Hill.’ It was his second career WoO LMS win.

9:20 p.m. – The 25-car field for tonight’s 40-lap A-Main will soon be assembling in the staging area after the completion of the twin B-Mains, which had a pair of interesting winners.

Jimmy Bernheisel and Jim Yoder were the victors of the last-chance events. Ironically, both drivers have sons who qualified through tonight’s heat action: Bryan Bernheisel and Dylan Yoder.

WoO LMS points provisional starting spots have gone to Tim Fuller and Clint Smith, who broke a motor during the B-Main and will take the green flag in Bub McCool’s backup car. Kenny Trevitz will start 25th as the track provisional.

The 15-lap Pro Stock feature is currently on the racetrack, with the WoO LMS headliner to follow.

One, of course, is Jeff Rine, who is looking to score an emotional hometrack victory after capturing the first heat. The other is Vic Coffey, the former WoO LMS Rookie of the Year who passed his Sweeteners Plus teammate Tim McCreadie for the lead on lap eight of the final heat to score an impressive triumph.

Coffey would love nothing better than to make tonight’s ‘Showdown On Sand Hill’ his long-awaited first-ever WoO LMS victory. He’s winless in 156 career A-Main starts, a stretch of frustration that includes several near-misses. It should be noted that Coffey excels on big, fast tracks like Selinsgrove — just last year, he finished second in a WoO LMS event at the similarly-shaped Black Hills Speedway in Rapid City, S.D. — so perhaps this could finally be his night.

Darrell Lanigan finished second to Rine in the first heat, but he’ll start the A-Main from the pole position after picking the prime spot in the feature redraw. Satterlee will take off from the second spot, with Eric Wells, Coffey, Rine, McCreadie, Rick Eckert and Richards following in that order.

The first of two 12-lap B-Mains is now on the track.

8:10 p.m. – For Jeff Rine, this weekend couldn’t be any bigger. He is, after all, an eight-time Selinsgrove Speedway champion, so he dearly wants to turn back the Outlaw invaders.

Rine registered the fastest overall lap in Ohlins Shocks Time Trials, putting up a clocking of 19.226 seconds to earn his second career WoO LMS fast-time honor. He back that up by winning the first heat race, putting him in position for a top-eight starting spot in the A-Main.

“This is pretty cool,” Rine said after receiving a $600 bonus for his fast time ($500 posted by Aubrey Alexander Toyota for a local driver setting quick time and $100 from Fast T’s). “I was saying that this might be a track where the locals have an advantage because it’s a place of its own.”

Rine came into this weekend’s action one week removed from suffering an engine failure at Selinsgrove. He got his powerplant back on Wednesday and it appears to be clicking nicely tonight.

7:20 p.m. – One month after winning his first-ever WoO LMS A-Main at Shawano (Wis.) Speedway, Gregg Satterlee has started his bid for a home-state victory by topping the speed chart in hot laps. His circuit of 19.485 seconds nipped Selinsgrove regular Dylan Yoder’s time of 19.498 seconds during practice.

Skies have turned bright and sunny as teams make final preparations for the program, which will include split-group qualifying to set the fields for four 10-lap heat races. Drivers in Group ‘A’ during Ohlins Shocks Time Trials will compete for spots in Heats 1 and 2, while those in Group ‘B’ will vie for starting positions in Heats 3 and 4.

Buzz in the air

5:15 p.m. – There’s a sense of anticipation running through Selinsgrove Speedway as race teams — more than 30 strong at the moment — prepare for tonight’s inaugural WoO LMS action at the sprawling track.

Following a six-hour overnight haul from West Virginia Motor Speedway, the 11 WoO LMS travelers and their regional and local challengers have been greeted by a steamy late-summer day. Temperatures are flirting with 90 and the humidity is high — and track and series officials are hoping that the scattered thunderstorms expected to dance around the state for a couple more hours stay away from Selinsgrove.