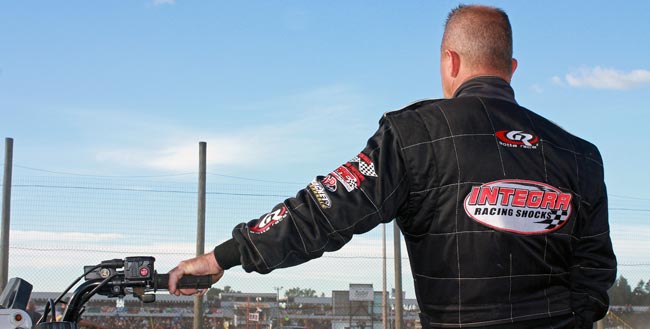 CONCORD, NC – Oct. 22, 2012 – Darrell Lanigan has entered the PEAK Motor Oil World of Outlaws World Finals Presented by NAPA Auto Parts with the World of Outlaws Late Model Series championship already in his back pocket, and he’s gone into the season-ending spectacular locked in a dramatic battle for the points title.

Not surprisingly, the 42-year-old star from Union, Ky., prefers the decidedly less-stressful first option, which happens to be the way he’ll go racing in this year’s PEAK World Finals Presented by NAPA on Nov. 1-3 at The Dirt Track at Charlotte. Thanks to his record-breaking 2012 campaign, he’ll clinch his second career WoO LMS crown when he drives through the pit gate of the four-tenths-mile oval.

“It’s a lot less pressure on a guy to go down there and not have to worry about where he finishes,” said Lanigan, who cemented the 2008 WoO LMS championship by simply showing up for the PEAK World Finals Presented by NAPA and two years later lost the title to Josh Richards of Shinnston, W.Va., in a down-to-the-wire thriller. “We always go there to win the race, but being in a point race definitely gives you something else to think about. I’m glad that this year the points are done so we can just go there to win the race.”

With Lanigan carrying a gargantuan 194-point lead over defending WoO LMS champion Rick Eckert of York, Pa., into the two 50-lap, $10,000-to-win A-Mains that comprise the full-fender portion of the PEAK World Finals Presented by NAPA, he has no need to count points. His entire focus will be on winning at The Dirt Track – something he’s never done in 18 career starts there.

Lanigan’s best finish at The Dirt Track is third, in both the 2007 World of Outlaws Late Model Showdown and the finale of the 2010 PEAK World Finals Presented by NAPA, the latter a race that saw him charge forward from the 21st starting spot but fall four points shy of stealing that year’s WoO LMS title from Richards. His Charlotte history also shows three fourth-place finishes (both ends of the ’09 World Finals, WF opener in ’10) and two fifth-place runs (finale of ’07 World Finals, ’12 WoO LM Showdown on Oct. 10), and he was in contention to win the 2008 Colossal 100 until a broken rearend knocked him from the runner-up spot with 10 laps remaining.

“I don’t know what our problem has been there,” Lanigan said of The Dirt Track. “We run pretty decent there, and we’ve finished in the top five quite a bit, but we just haven’t been able to get our program right for early in the night at that place for some reason. It seems like we get ourselves behind too much there and have too much to overcome in the feature.

“We have been working this week on some stuff to try and get better there and we’ll see what happens. Finally getting a win at Charlotte would definitely be a great way to cap the season off.”

And make no mistake – it has been an unforgettable season for Lanigan. He’s literally rewritten the WoO LMS record book, setting new standards for A-Main wins in a single season (15), alltime victories (now at 41) and consecutive triumphs (six straight in one sizzling July-August stretch). He also won an unprecedented three 100-lap World of Outlaws events this year, capturing the Jackpot 100 at West Virginia’s Tyler County Speedway, the USA Nationals at Wisconsin’s Cedar Lake Speedway and the Down & Dirty 100 at Michigan’s Berlin Raceway.

* His 15 wins have come at 15 different tracks – ranging in size from a quarter-mile to a half-mile – in 12 states and one Canadian province.

* He has an astounding 31 top-five finishes (15 wins, four seconds, six thirds, three fourths and three fifths) and 35 top-10s in 38 A-Mains. Eckert ranks second in both categories with 19 top-five and 33 top-10 finishes.

* He is tied with Eckert for most fast-time honors (five) and tops the list of heat-race winners (16).

* He will become the first driver in the tour’s modern era to lead the points standings from start to finish and he’s in position to surpass his own 2008 record for largest points margin by a champion (160 points).

* He has just two DNFs this season (14th place on April 27 at North Alabama Speedway due to damage sustained in a tangle and 18th place on July 10 at South Dakota’s Black Hills Speedway due to an overheated engine), and on only one occasion was he lapped during an A-Main (Aug. 18 at Michigan’s Merritt Raceway).

* He has failed to qualify through a heat race just three times and used two provisional starting spots.

What’s more, even with the title secured and so many records already established, Lanigan can make some more history during the PEAK World Finals Presented by NAPA. He will bid to become the first driver to sweep both of the weekend’s WoO LMS A-Mains and join Richards as just the second World of Outlaws regular to capture a World Finals feature event since its birth in 2007.

“I didn’t realize Josh (in ’08) is the only Outlaw guy to win (during the World Finals),” said Lanigan. “I guess that shows how tough the competition is. There are a lot of good cars down there – that race draws one of the best fields you’ll see anywhere all year. When you win (a World Finals A-Main), you’ve done something.”

Stationed behind the wheel of his familiar Cornett-powered Rocket car, Lanigan figures to be the driver to watch during the PEAK World Finals Presented by NAPA. Just think of the cherry he could put on top of his 2012 season if he’s able to win the season-ending A-Main on Saturday night (Nov. 3) before a standing-room-only crowd and a national television audience watching on SPEED.

“It would be nice to have the stage by yourself,” Lanigan said when asked about the prospect of concluding the weekend by holding the championship and race-winner’s trophies. “I’d love to end the year like that, but if it don’t happen that way it’s no big deal. We’ll still get to celebrate a championship and we’ll still have had an unbelievable year.

“We work extremely hard on our program and it definitely paid off this year. We know that we’ve earned what we got this year. You gotta work hard to make it happen.”