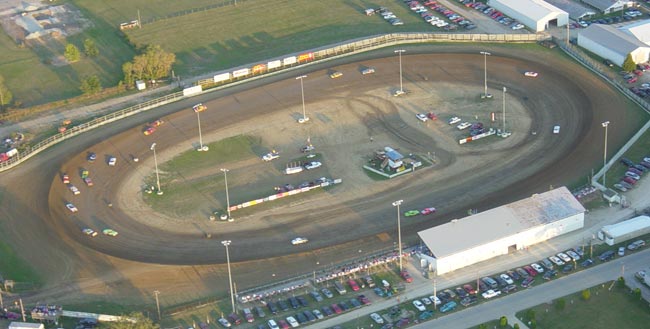 INDEPENDENCE, IA – July 8, 2011 – Rick Hartzell has spent the last two years chasing the World of Outlaws Late Model Series all over the country with his wife Jill George, the first female driver to follow the national tour as a regular.

On Tues., July 12, Hartzell and George will finally get a chance to enter a World of Outlaws event in their backyard – thanks in large part to…Hartzell.

Hartzell, 57, is co-promoting the 50-lap, $10,000-to-win WoO LMS program on July 12 at Independence Motor Speedway, a three-eighths-mile oval located just 35 minutes from the Hartzell/George homestead in Cedar Falls, Iowa. The track’s first-ever World of Outlaws race will kick off the circuit’s four-stop ‘Wild West Tour,’ which will continue on to Minnesota, North Dakota and Wyoming through July 19.

“It’s really simple how this all happened,” Hartzell said when asked for the genesis of his partnership with Independence’s regular promoter, Cam Granger. “Cam is a friend and both him and I have an interest in keeping open-motor (dirt Late Model) racing going around here, so one day when I saw him this winter I said, ‘We ought to have a World of Outlaws race at Independence (in ’11).’ He just said, ‘O.K. Let’s do it.'”

Once Hartzell, who owns and wrenches on the No. 22 cars that George campaigns on the WoO LMS, talked with tour director Tim Christman to secure the date he coveted for a race at Independence, his promotional debut was on.

“I told Tim that we’d love to try to do this, but we want (the race) to be the night before Deer Creek (Speedway),” said Hartzell, referring to the Spring Valley, Minn., track two hours to Independence’s north that hosts the WoO LMS ‘Gopher 50’ on Wed., July 13. “I just thought it would be the right deal and work really well, and that’s what Tim worked out with us.

“I’m real excited about this event – and not just because it’s good for me and Jill to have a World of Outlaws show close to us for once after all the traveling we do. Independence is a great weekly racetrack. They just go crazy over their racing there, and because of that I think this has a chance to be a really, really good event.

“What I’ve really hammered on the guys helping do this thing with us is that we do two things: make sure we have a great racetrack, and provide great hospitality to everybody who comes to race with us,” he added. “We’d like to have an annual World of Outlaws event, so if we do things right maybe we can make that happen.”

Hartzell’s main role in his joint venture with Granger has been on the marketing and public relations side. He’s been working the local-media contacts he made while serving as the Athletic Director of his hometown’s University of Northern Iowa from 1999-2008.

“I’ve been trying to get the word out about the race by talking to a bunch of my friends in the media,” said Hartzell, who today officiates nearly 100 NCAA Division I men’s basketball games a season (he’s worked as a ref for 28 years). “In my previous job doing the A.D. work (at Northern Iowa), I was always extra accessible. If the radio, print or TV guys needed me for something, I would get back to them.

“I’ve used that relationship with the media to call in a few favors here with the race. I’m gonna do some radio interviews this week. Every newspaper in the area is gonna promote the thing for us. We’re getting some great attention around here.”

Hartzell paused, and then said, “I think if we get a good weather day, this World of Outlaws show has the potential to be a great deal for Independence. It’s the only (WoO LMS) event of its kind this year in the state of Iowa, and some of these Outlaw guys – particularly (current points leader) Rick Eckert and (2006 champion) Tim McCreadie – are hugely popular in the Midwest. People around here are excited to see these Outlaw guys.”

The pit area will also be populated by, among others, talented Iowans Brian Birkhofer of Muscatine, Chad Simpson of Mt. Vernon, Chris Simpson of Oxford and Jason Rauen of Farley, nationally-recognized standout Jimmy Mars of Menomonie, Wis., and George, the lady racer who will compete in front of many family members, friends and general acquaintances at a facility she considers her home track.

George, 32, raced often at Independence in small-motor dirt Late Model events when she entered the division in 2003 following the end of her wildly successful scholastic athletic career in Iowa. A graduate of the University of Northern Iowa who now works as a chiropractor when she’s not on the road racing with her husband and their four-year-old son Jackson, she’s excited to return to the track with the WoO LMS, the ultra-competitive tour on which she’s taken her lumps the last two years.

“I’ve had to go to a lot of places I’ve never seen (with the World of Outlaws), so it’ll be fun to go to a track I’ve raced at a lot,” said George, who finished 12th in the 2010 WoO LMS points standings (she entered 37 of the season’s 44 events and started 20 A-Mains) and currently ranks 14th in the ’11 points race (she’s entered 14 of this year’s 15 events and has six A-Main appearances). “It’s so close to home for me – hell, my (chiropractic) practice (in Waterloo, Iowa) is only 25 minutes from this track.”

George has been talking about the Outlaws’ stop at Independence with many of her patients, acting as a secondary marketing agent for her husband.

“A lot of times during the week when I’m working and adjusting people, they’re interested in what I’m doing with the racing but a lot of them have never even seen a race,” said George. “Well, with this race at Independence being so close, I’ve got a lot of people who are wanting to come over and watch. I keep telling them, ‘If there’s ever a time you want to get over to a race, this is the one to get to. It’ll be exciting, and you’ll get to see the best of the best in the country out there. This isn’t gonna be just like a local Saturday-night race.'”

George knows just how tough the World of Outlaws drivers are. Her career-best finish on the WoO LMS is 14th – in 2010 at Quebec’s Autodrome Drummond and 2011 at Georgia’s Swainsboro Raceway – so it’s clear racing on the tour has been an extreme challenge.

“I’ll have people all the time ask me at my practice, ‘Well, how’s racing going?'” said George, who does own the best finish ever recorded by a female in a WoO LMS A-Main. “I say, ‘Well, it’s good and bad, there’s been ups and downs.’ Then they ask, ‘Well, are you winning?’ I kind of laugh and tell them, ‘Well, no. We’re just glad to be making the races.’ They kind of look at you funny when you say that, like they’re saying, ‘What are you doing out there then?’ so I explain to them how hard this and tell them to come over (at Independence on July 12) and see for themselves.

“We’re definitely not getting great results right now, but I’m doing it to get experience,” she continued. “The learning curve of this sport is so extreme, so the reason we decided to run with the best of the best was to try and shorten that learning curve. We’ve definitely done that, and we’re just trying to keep getting seat time and getting better.”

Independence’s pit and spectator gates are scheduled to open at 3 p.m. for the July 12 program, which includes a $1,000-to-win feature for the IMCA A-Mods. Hot laps are set to commence at 6:30 p.m. and WoO LMS time trials will follow at 7 p.m.

Advance tickets are available by logging on to www.independencemotorspeedway.com. VIP tickets, which include premium seating along with a meet-and-greet autograph session with the drivers and an event T-shirt, are available for $50 each while general grandstand admission is $30 and $15 for kids 11-and-under. Pit passes (available at the track only) will be $35.

Tickets ordered in advance will be made available for pick-up at the track on race day at the Will Call window, which opens at 1 p.m.