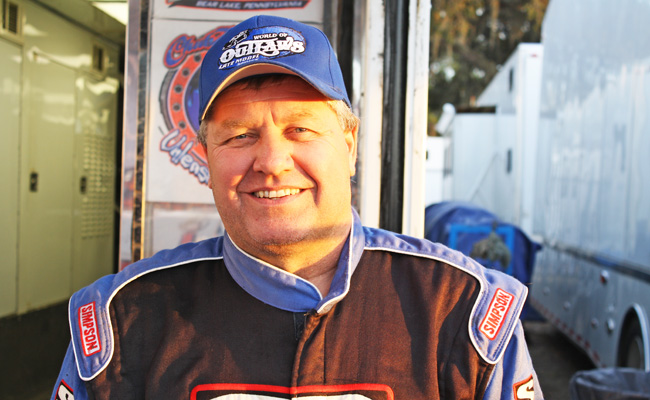 CONCORD, N.C. – March 10, 2015 – After his resurgence during February’s World of Outlaws Late Model Series swing through Georgia and Florida, Chub Frank should be chomping at the bit for the national tour to return to action. Instead, the 53-year-old from Bear Lake, Pa., is wishing there were a few more weeks before he and the rest of the WoO LMS regulars head to Kentucky and Arkansas for a March 20-21 doubleheader at Kentucky Lake Motor Speedway and I-30 Speedway.

That’s because Frank is recovering from knee replacement surgery on his left knee on Feb. 23, two days after the final race of Volusia Speedway Park’s DIRTcar Nationals wrapped up the WoO LMS tour’s season-opening stretch of seven races in the Southeast.

The recovery period typically requires at least six weeks of downtime. However, Frank intends to be back behind the wheel of his No. 1* Longhorn Chassis at Kentucky Lake, giving him just under five weeks to mend.

The timing of the surgery was by no means convenient, but Frank had already delayed the operation as long as he could.

“I’d rather not have had to do it, but it was something that had to be done,” said Frank, who is going through physical therapy daily to help speed along his recovery. “I was getting sick of it. The only other option was to wait until November and I really wasn’t waiting that long to do it. Something had to get done because I couldn’t do what I want to do. I couldn’t move around like I need to move around and I was always limping.

“They say it’s six weeks. I don’t know if that’s a full recovery, but they say it’s usually six weeks till you’re up and doing what you want to do. But everybody’s different. It’s all about therapy and all that stuff.

While Frank has certainly heard suggestions that he should plan on sitting out the tour’s upcoming events and focus on his recovery – including from his doctor – Frank plans to do everything possible to not miss a series race. A WoO LMS regular since the tour was restarted under the World Racing Group banner in 2004, Frank is considered an ironman on the series, having entered 441 of the 443 events contested in the WoO LMS modern era.

The only two races Frank has missed came at the 2009 World of Outlaws World Finals at The Dirt Track at Charlotte, when while competing in a Thursday night makeup event, he suffered facial injuries from a flying clod of clay that struck his helmet. He was treated at a local hospital, but had to sit out the two ensuing World Finals programs and received ‘hardship’ points as a WoO LMS regular.

Frank could be eligible for hardship points again if he has to miss events due to his surgery, but he would rather avoid that if possible.

“The plan is to race,” said Frank, who’s currently fifth in the WoO LMS championship chase, 122 points behind leader Shane Clanton of Zebulon, Ga. “We’re getting everything ready with that gameplan and we’ll just see what we have to do when the time comes. I’ve got like eight different backup plans, but I have no idea what I’m gonna do yet. We’ll make a decision sometime in the next week or so, but hopefully I’m able to race so we don’t have to worry about that.”

Of course Frank would also like to race simply because he hopes to continue his race team’s upward trajectory without having to rely on a substitute driver. Coming off a successful debut of his new Longhorn Chassis that featured two top fives and five top 10 finishes during February’s action, Frank believes he’s close to ending his nearly six-year WoO LMS winless streak.

“We’ve got things going better right now than we have in a long time,” said Frank, who has 16 career WoO LMS victories but hasn’t won on tour since Aug. 22, 2009. “We’re definitely happy with the new car so far. It’s done exactly what we have tried to make it do. The driver messed up a couple times, but for the most part the car’s been really fast. We just have to get everything dialed in so we can get to victory lane. And I have to be racing for that to happen.”