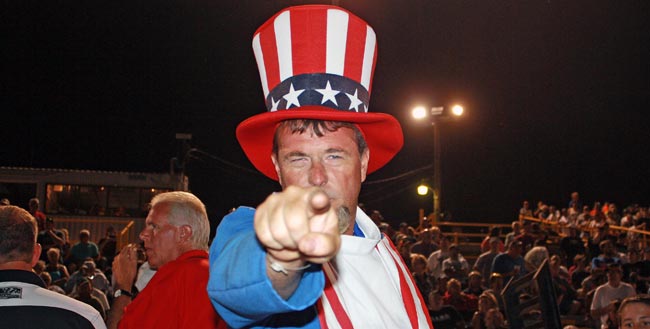 ONE MORE SPOT: The Firecracker 100 Presented by GottaRace.com weekend has arrived, so Darrell Lanigan is ready to hear the question everyone will be asking him as he makes his way around Lernerville Speedway.

Hey Darrell, is this the year you finally win the Firecracker?

With four second-place finishes in the last five years, Lanigan knows what it feels like to fall agonizingly short in the summer-starting World of Outlaws Late Model Series spectacular that highlights three nights of racing (June 27-29) at Lernerville. But all those near-misses aren’t changing his approach to this year’s $30,000-to-win show.

“Like I’ve always said, we go there to try to win the race,” said the no-nonsense Lanigan, deflecting the inevitable pre-Firecracker 100 inquiry. “Yeah, we’ve run second there a few times, been close. We’ll just see if we can get it done this time.”

Lanigan, 43, of Union, Ky., is entering this weekend’s seventh annual Firecracker 100 with a sense of calm, refusing to let his previous bridesmaid finishes (three consecutive from 2008-10 and a fourth last year) alter his approach. He’s an intensely competitive driver who absolutely hates to lose any race, but he’s come to realize that his burning desire to capture the Firecracker 100 is only worth so much. The defending WoO LMS champion understands that his fate will ultimately be decided by fortune and the gods of metallurgy.

“You just gotta have luck behind you,” bottom-lined Lanigan. “If you don’t have no luck, you’re not gonna win it. Actually, those races we finished second in there don’t bother me. I mean, yeah, I want to win it, but I’m not gonna beat myself up about it if it doesn’t happen.”

Lanigan demonstrated that attitude following last year’s Firecracker 100, when he crossed the finish line 1.582 seconds behind Scott Bloomquist of Mooresburg, Tenn., after his dramatic late-race bid for victory was effectively dashed when he slipped over the four-tenths-mile oval’s cushion between turns one and two on lap 98. He accepted his latest heartbreak with a head-shaking smile – a stark contrast to runner-up finish No. 3 in 2010, when he climbed out of his car for the post-race ceremonies and simply stared into the distance with a stern look on his face, too frustrated to say much more than “I guess I’m not supposed to win this —— ——- race.”

“Last year I was close and I was aggravated, but we had a good car,” said Lanigan. “We came from (seventh) to run second, but we just lost a little too much ground there when I got over the cushion with two to go. Hopefully this year we’ll be good again and get up front, and then have a little bit of luck on our side.”

In both 2010 and ’12, Lanigan finished second in the Firecracker 100 without leading a lap; he reached the runner-up spot on lap 82 of the ’10 event but wasn’t able to get close enough to seriously challenge winner Shane Clanton of Zebulon, Ga. In ’08, however, Lanigan led the race’s first 69 laps before Brian Birkhofer of Muscatine, Iowa, gained control and ran away from the field for a convincing triumph, and in ’09 Lanigan paced laps 13-93 before Jimmy Mars of Menomonie, Wis., swept by him to emerge victorious after rallying from a lap-27 pit stop to change a cut tire.

Lanigan, who has never won a feature at Lernerville, enters this year’s Firecracker 100 with momentum on his side for the second straight year. Though he sits third in the WoO LMS points standings, he leads all drivers with six victories, including back-to-back triumphs in Canada on June 20 at Brighton (Ont.) Speedway and June 23 at Cornwall (Ont.) Motor Speedway.

One year removed from setting a single-season WoO LMS record with 15 A-Main wins, Lanigan actually isn’t all that far off his sizzling 2012 pace. Through 22 A-Mains last year he had seven wins, 16 top-five and 19 top-10 finishes; this season he has six wins, 13 top-five and 16 top-10 finishes.

BIG BROTHER: The feel-good story of last year’s Firecracker 100 was authored by Dan Stone of Thompson, Pa., everyone’s favorite underdog who drove to a popular victory in the 30-lap WoO LMS preliminary A-Main on Friday night.

“That was so cool,” said Stone, whose previous WoO LMS win came behind the wheel of his father Warren’s No. 21d on Sept. 2, 2007, at Tri-City Speedway in Franklin, Pa. “It was really neat to get another Outlaw win at a big race like that with all those people there, and it was nice winning driving for someone else. I haven’t really had too many chances to drive somebody else’s car, so that made it special.

“We actually were horrible the night before (Thursday’s first preliminary night), so we change a bunch of stuff back to standard. It’s weird – you kind of get off in left field and then you put everything back to how Rocket tells you to run to begin with, and you end up way better. You always think you can out-think ’em, but they kind of have it figured out to start with.”

Stone wasn’t able to transfer his preliminary success into a strong run in last year’s Firecracker 100 finale, however. He finished the century grind one lap down in 16th place.

“I think on Saturday (last year) the track got a lot slicker because we didn’t have the rain we did on Friday,” recalled Stone. “So maybe we were just a little too conservative with our changes. Sometimes when you run good like that it trips you up a little. You don’t want to deviate from that setup that worked. We definitely needed to be a little tighter.

“That’s O.K., though. We have some more notes for this year and hopefully we can be a little more consistent and run good all three nights.”

Stone will be behind the wheel of the same ‘Super Deuce’ machine he entered in last year’s Firecracker 100. He’s made four starts in the car this season: two earlier this month in Appalachian Mountain Speedweek events and two in WoO LMS shows (June 23 at Cornwall and June 25 at New York’s Canandaigua Motorsports Park).

Capturing the Firecracker 100 is a dream that is certainly dancing in Stone’s head. He would relish the honor of being the first Pennsylvania driver to bag the Commonwealth’s richest dirt Late Model event.

“It would be huge to win it,” said Stone, who drove his family’s No. 21d to a pair of top-five WoO LMS finishes last week (second at New York’s Fonda Speedway on June 19, fourth at Brighton on June 20). “We’ve never come real close in a crown-jewel event like that, so it would be real cool to pull that off and get your name with all those other great guys who have won it. They’re almost unstoppable when it comes to that type of racing – it’s like if you give them guys a 100-lapper and they’re in a league of their own, so it would be cool to be able to beat them.”

THE OUTLAWS: Joining Lanigan in the Firecracker 100 field will be 10 other WoO LMS regulars. The group – with their career-best Firecracker finish noted – includes:

PRELIMINARY NIGHT WINNERS: Since the Firecracker 100 weekend was expanded in 2010 to three nights – with complete programs topped by 30-lap WoO LMS A-Mains on Thursday and Friday – the winners have been Richards and McCreadie (’10); Richards and Bloomquist (’11); and Bloomquist and Stone (’12).

DID YOU KNOW?: The best Firecracker 100 run authored by a Lernerville or western Pennsylvania dirt Late Model regular came in 2012, when Jared Miley of South Park, Pa., finished eighth.

Miley, who will be in this year’s Firecracker field, is the only Lernerville/western Pennsylvania driver to score a top-10 finish in the Firecracker 100.

Other Lernerville regulars to watch this weekend include John Garvin Jr. of Sarver, Pa., who owns a provisional starting spot for the Firecracker 100 by virtue of leading the track’s points standings; Alex Ferree of Saxonburg, Pa., who holds the other local-driver provisional after winning last Friday night’s Mid-Season Championship; Michael Norris of Sarver, Pa., who has one win this season at Lernerville; and Mike Pegher Jr. of Wexford, Pa., another one-time winner at Lernerville in ’13.

WHAT A WEEKEND: Fans get three full days of entertainment during the Firecracker 100 presented by GottaRace.com.

The weekend not only includes the complete WoO LMS preliminary programs on Thurs., June 27, and Fri., June 28, and the grand finale on Sat., June 29, featuring heat races, B-Mains, the Uncle Sam 30 and the Firecracker 100, but also pre- and post-race excitement.

Thursday night’s program will be followed by a concert by the Justin Fabus Band; Friday’s extracurricular activities include the inaugural Kick-It charity kick-ball game featuring WoO LMS and Lernerville drivers at 1 p.m. and judging for the Best Tailgate Party and Best Camp Site awards at 3 p.m. plus a pulse-pounding post-race fireworks display and a concert by the group NOMaD following the final checkered flag; and on Saturday spectators can enjoy the annual driver/fan horseshoe and cornhole tournaments and weenie roast starting at 12 noon, the first-ever DirtonDirt.com Driver/Fan Trivia Contest and the traditional driver autograph session under the main grandstand at 4 p.m.

GET YOUR TICKETS: For ticket information visit www.lernerville.com and www.worldofoutlaws.com/tickets or call 724-353-1511.

Complete details on the Firecracker 100 can be obtained by logging on to www.lernerville.com or calling calling 724-353-1511.

DON’T MISS THE ACTION: Fans who can’t make it to Lernerville will still have an opportunity to witness all the intense competition on the ‘Action Track’ clay.

DIRTVision.com and DirtonDirt.com have joined forces to offer fans live video coverage over the internet of all three Firecracker 100 weekend programs. More than 15 hours of live video is expected to be produced, including multi-camera coverage of every lap of action with pre-race and post-race shows, driver interviews, a roving reporter and more. Fans will also have the opportunity to chat with other viewers while watching the racing.

DirtonDirt.com co-founder Michael Rigsby will oversee a specially assembled production team that brings extensive broadcast experience. Jay Williams of Parker Street Productions is directing with videography by Steve Gigeous, Mike Quinn and Lee Knepshield and assistance from others. WoO LMS announcer Rick Eshelman will do play-by-play of the events along with Lernerville Speedway announcer Dow Carnahan.

The cost to watch all three nights of action live on-line is $42.99 for DirtonDirt.com subscribers (or $45.99 for non-subscribers). Nightly packages for the first two nights are $18.99; Saturday’s standalone package is $21.99. You’ll need a credit card at our ordering page to select your package.