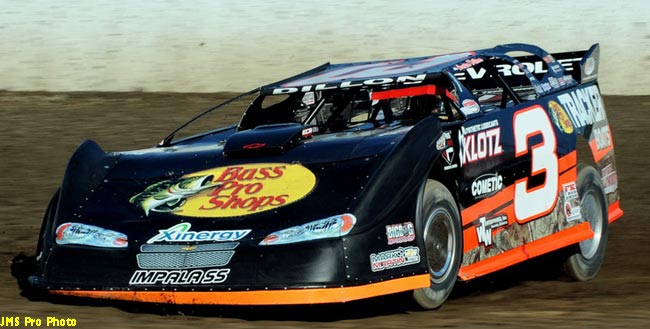 The grandson of famed NASCAR team owner Richard Childress, Dillon won the 2011 Camping World Truck Series championship and is currently battling for the Nationwide Series title in his first year as a regular. He will arrive at Winchester for Saturday’s Ernie D’s & Gunter’s Honey 50 after racing his Richard Childress Racing AdvoCare/Bass Pro Shops Chevy No. 3 in tonight’s Nationwide Series event at Bristol (Tenn.) Motor Speedway.

Dillon, 22, of Lewisville, N.C., has entered 21 WoO LMS shows and started eight A-Mains since making his debut on the full-fender circuit as a fresh-faced 16-year-old in February 2007, but he hasn’t appeared in a World of Outlaws race since Oct. 13, 2010, at The Dirt Track at Charlotte in Concord, N.C. He finished seventh in that A-Main, one of three career top-10 WoO LMS placings on his resume.

A Nationwide Series winner at Kentucky Speedway this season, Dillon competes in selected dirt Late Model and open-wheel Modified events when his NASCAR schedule allows. He has made seven dirt Late Model starts in 2012 with a top finish of fourth in a DIRTcar Summer Nationals feature on July 10 at Florence Speedway in Union, Ky. He also finished third in June’s Prelude to the Dream, the charity race at Eldora Speedway in Rossburg, Ohio, that featured more than two dozen stars from the NASCAR, IndyCar, NHRA and World of Outlaws Sprint Car circuits.

Dillon, whose career-best WoO LMS finish is sixth (Nov. 5, 2009, at The Dirt Track at Charlotte), will drive a Team Dillon Warrior chassis dirt Late Model carrying the iconic No. 3 at Winchester and Selinsgrove. He will make his first career start at both tracks.

Dillon will be one of two drivers from the NASCAR Nationwide Series in action at Winchester and Selinsgrove, joining two-time WoO LMS champion Josh Richards of Shinnston, W.Va. Richards left the World of Outlaws tour in April to pursue his NASCAR aspirations, but a break in his stock-car schedule allowed him to return to the circuit last week and run the next four races as well.

More information on this weekend’s WoO LMS events is available by logging on to www.winchestervaspeedway.com or www.selinsgrovespeedway.com.