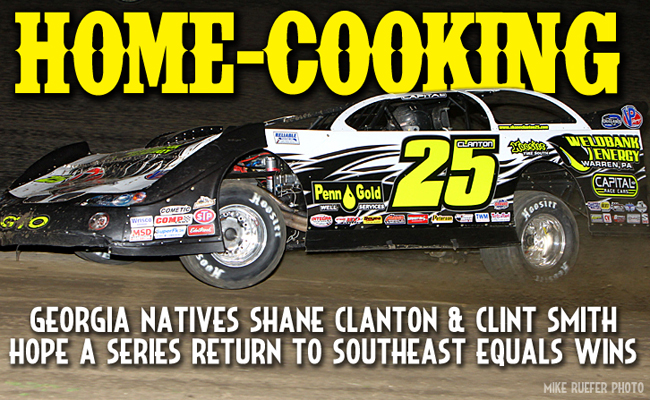 FAYETTEVILLE, N.C. – April 29, 2014 – Georgians Shane Clanton and Clint Smith are looking for success when the World of Outlaws Late Model Series rolls into their Southern territory this weekend.

The WoO LMS will kick off an ultra-busy month of May this weekend with a pair of $10,000-to-win events in North Carolina and Georgia.

The action starts Friday at 4/10-mile Fayetteville (N.C.) Motor Speedway as the Outlaws will roll into the Larry Norris-promoted speed-plant for a 50-lap, $10,000-to-win race during their annual Tarheel 100 event presented by Ford of Clinton, N.C.

This will mark the first series visit to Fayetteville since April 30, 2010, when Josh Richards picked up the victory, and went on to claim the series championship. Richards also won the Oct. 7, 2008, event and home-state driver Jeff Smith of Dallas, N.C., took the 2009 series victory.

On Saturday the series will make its first appearance to the Stan Lester & Sarah King-promoted Lavonia (Ga.) Speedway for the second 50-lap, $10,000-to-win event of the weekend.

Clanton, of Zebulon, and Smith, of Senoia, are both within a two-hour drive of Lavonia Speedway. Clanton, one of World of Outlaws Late Model Series regulars chasing his first win of the season, says he’s looking forward to racing closer to home this weekend.

“Lavonia is about as close as the series gets to racing near our home, it would be special to win one here,” said Clanton, who last raced at Lavonia Speedway about six years ago. “We need to win this weekend and hopefully we can.”

Clanton, fourth in WoO LMS points, is 98 markers behind leader Darrell Lanigan and needs a great finish or a win to stay on track.

There have been eight different winners in eight World of Outlaws Late Model Series events this season, with Shannon Babb, of Moweaqua, Ill., picking up the $20,000 Illini 100 last Saturday Night in front of his home-state crowd for the 12th WoO LMS payday of his career.

Lanigan, of Union, Ky., leads the WoO LMS contingent into this weekend’s action with a 52-point lead over New Berlin, Ill.-native Brandon Sheppard, who won during February in Florida. Rick Eckert of York, Pa., Clanton and Tim McCreadie of Watertown, N.Y., round out the top-five in the series championship standings. Lanigan, who has one win this season, leads the series in earnings with just over $44,000 pocketed through the first eight races.

Among the top-12 in series regulars, 10 of those drivers are hungry for their first victory of the season, including Smith, the 49-year-old driver who owns 12 WoO LMS victories in his career and has been winless since May 8, 2011, in his home state at Needmore Speedway.

“I’m really looking forward to going to Fayetteville this Friday,” stated an enthusiastic Smith. The four-time Southern All-Star Series champ will reminisce of days when he drove the Dunn-Benson Ford entry for Carlton and Kemp Lamm. Smith spent nearly six years behind the wheel of that ride.

But Smith’s goal is to get that first WoO LMS victory of the season.

“We need a World of Outlaws win,” said Smith, who has teamed up with the Florida-based Todd Wood racing group in a Rocket Chassis for the entire WoO LMS tour. “We’ve had some motor problems and just haven’t been able to get into a rhythm yet. It’s tough to win anywhere the Outlaws go, there are no breaks anywhere.”

Smith says he enjoyed his trip to Farmer City last weekend, but the balance on tires between the black dirt and the red clay he is most comfortable to racing on made the ultimate difference.

“We had a good car all weekend, just bad circumstances put us behind the eight ball, it was a gamble on tires,” said Smith, who fell victim to a right-rear flat tire that put him into the work area to be able to continue the remaining 12 laps. Smith finished his Illini 100 run in the 19th-position.

On Friday at Fayetteville Motor Speedway, both the pit and grandstand gates will swing open at 3:00 p.m., the driver’s meeting is slated for 6:30 p.m. and hot laps at 7:00 p.m. The track’s Limited Late Models, Open Wheel Modifieds, Super Street, Pure Stock and U-Car divisions will join in as support classes for the evening. Adult general admission is $30.00 and adult pit passes will be $40.00. Check the track’s website for additional pricing info for Friday’s WoO LMS show.

On Saturday at 3/8th-mile Lavonia Speedway, all gates will swing open at noon with the driver’s meeting slated for 7:15 p.m. and hot laps will follow. The Fastrak Pro Late Models, Hobby, Stock Four and Rookie Four divisions will be the supporting divisions on Saturday. Adult grandstand admission is $25.00, trackside parking is $30.00 and adult pit passes are $35.00.

Further information on Fayetteville Motor Speedway can be obtained by calling (910) 223-7223 or log on to www.thenewfayettevillemotorspeedway.com . The track is located at 3704 Doc Bennett Road in Fayetteville, NC 28304.

For more information on Lavonia Speedway, visit www.lavoniaspeedway.net. The track is located at 5941 Lavonia Highway in Lavonia, Ga. 30553.