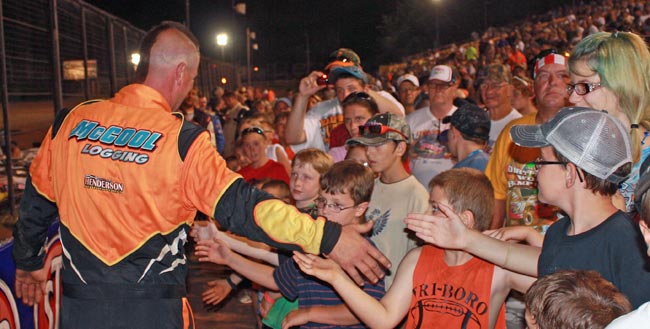 CONCORD, NC – Oct. 2, 2012 – Bub McCool will have a special ‘treat’ for fans when he unloads his No. 57J dirt Late Model in the Rolling Wheels Raceway Park pit area on Thursday night (Oct. 4).

The newly-crowned 2012 World of Outlaws Late Model Series Rookie of the Year has slapped a unique Halloween-themed wrap on his machine, assuring himself plenty of attention when the national tour visits the five-eighths-mile oval in central New York for a 50-lap, $10,000-to-win NAPA Auto Parts Super DIRT Week XLI showdown.

McCool, 35, of Vicksburg, Miss., won’t reveal much about the appearance of his two Victory Circle cars, which he reworked over the past two weeks while stationed at Hoosier State racer Chad Stapleton’s shop in Indianapolis after driving one of Stapleton’s mounts to a 16th-place finish in last Saturday night’s Knoxville (Iowa) Late Model Nationals.

“It’s kind of flamed up with a few characters on it,” said McCool, who has made running a Halloween-themed car an October tradition in recent seasons. “But that’s about all I can say. My mama has reamed me out about not letting nobody see this race car before it gets unloaded, so you’ll just have to look at it on Thursday.”

New t-shirts and diecasts will accent the debut of McCool’s Fright Night car – and undoubtedly add to his burgeoning popularity on the WoO LMS. His affable personality, hard-nosed racing style and success as a first-time national-tour traveler has made him a driver to watch.

McCool enters Thursday’s action having already clinched the 2012 WoO LMS Rookie of the Year award. With four races remaining he holds an insurmountable 282-point lead (3,304-3,022) over Kent Robinson of Bloomington, Ind., in the rookie standings, which are determined using drivers’ 25 best finishes. Jack Sullivan of Greenbrier, Ark., who dropped off the series as a regular in August but has entered 32 of the season’s 36 events, is a distant third in the rookie battle with 2,918 points.

The $10,000 Rookie of the Year honor tops off a memorable campaign for McCool, who scored his first-ever WoO LMS A-Main victory on April 27 at Tazewell (Tenn.) Speedway and also has finishes of second and third among his seven top-five placings. He sits seventh in the overall points standings, just 38 markers behind sixth-place Clint Smith of Senoia, Ga.

“We’ve definitely accomplished what we wanted to this year,” said McCool, who trails fifth-place Chub Frank of Bear Lake, Pa., by 128 points. “I would be satisfied with what we’ve done. I’d like to get into the top five (in the final points) if we possibly could, but winning the rookie deal, winning a race and getting the finishes like we have is a pretty good year for us.”

Chasing the 2012 WoO LMS has been a learning experience for McCool, who will make his first career start at Rolling Wheels on Thursday.

“It’s definitely taught us some things about race cars and tire choices,” McCool said of his ambitious ’12 schedule. “Racing at a lot of different racetracks all the time definitely makes you a better race car driver. I feel like we’ve gotten a lot better this year. We’ve learned some things that hopefully will pay off the rest of this year and when we get back at it next year.”

McCool said he plans to fly home on Friday morning to compete in this weekend’s sixth annual Gumbo Nationals at Greenville (Miss.) Speedway. He’ll drive one of Klint Byars’s cars in the event while his crew stays on the road; he’ll meet up with his team on Oct. 10 at The Dirt Track at Charlotte in Concord, N.C., for the running of the Circle K World of Outlaws Late Model Showdown.

While the 2012 WoO LMS Rookie of the Year crown has been decided, three other special awards are still to be decided over the season’s final four events.

* The Raye Vest Memorial Pill-Draw Awards presented by McCarthy’s One Hour Heating & Air Conditioning. The WoO LMS regulars with the lowest and highest time-trial pill-draw averages during the 2012 season will win the pair of $500 checks – spots currently held by Tim Fuller of Watertown, N.Y. (lowest at 35.3) and Rick Eckert of York, Pa. (highest at 45.65).

* DirtonDirt.com Hard Charger Award. The driver in the catbird’s seat for the honor – a $500 check presented to the driver who improves the most cumulative positions in A-Mains during the WoO LMS season – is currently Chub Frank, who has improved a total of 147 spots through 36 events.

Thursday night’s program at Rolling Wheels, which also includes the Mr. DIRTcar 358-Modified Series, is scheduled to begin at 7:30 p.m. Grandstand gates will open at 5 p.m.

Tickets can be purchased in advance by logging on to www.worldofoutlaws.com/tickets or calling the event hot hotline at 877-395-8606.

More information about NAPA Auto Parts Super DIRT Week XLI can be obtained by logging on to www.SuperDirtWeekOnline.com or calling DIRTcar Northeast Headquarters at .315-834-6606.