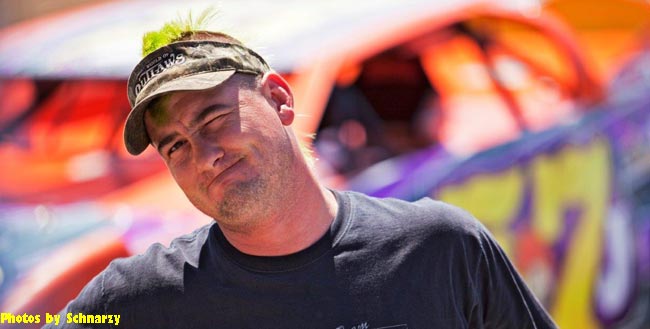 WINNIPEG, MANITOBA – July 10, 2013 – When Bub McCool goes racing on Thursday night (July 11) in the World of Outlaws Late Model Series ‘Wild West Tour’ event at Canada’s Red River Co-op Speedway, he’ll be over 1,450 miles from his home in Vicksburg, Miss. But even on far-flung foreign turf, he’ll have plenty of supporters behind him.

McCool, you see, has become one of the most popular drivers on the World of Outlaws circuit. In just his second season as a series regular, the racer from the Gulf Coast has developed the unmistakable name recognition and reputation for approachability that brings him a steady stream of visitors to his hauler and a growing roar from the stands wherever he travels with the national tour.

These days it doesn’t matter if McCool, 36, is at a track in Florida, Illinois, New York, Pennsylvania, Wyoming or Canada. If the WoO LMS is in town, there are going to be fans talking about good ‘ol Bub and looking to meet him before or after the races.

“I’ve definitely noticed a difference,” McCool said when asked about the increase in his fan base since he hit the road with the Outlaws in 2012 and claimed Rookie of the Year honors. “The fans are coming over to see us more than they used to. It’s real good because we enjoy the hell out of talking to ’em.”

Certainly McCool’s burgeoning popularity can be attributed to his high-level performance, which includes a pair of WoO LMS A-Main triumphs: his career-first win last year (in just his ninth start as a series regular) and No. 2 just a couple weeks ago on June 25 at Canandaigua (N.Y.) Motorsports Park. But he understands as much as anyone that some other factors earn him extra attention.

For starters, there’s his name. Bub McCool just sticks out like a bold-faced line on a drivers’ roster – and sounds like it belongs to a throwback, old-school racer.

“Oh yeah, I get asked a lot about it,” said McCool. “People say, ‘You got the coolest name in racing.'”

And of course there’s McCool’s hair. The distinctive Mohawk he rocks – sometimes colored, sometimes spiked, always noticeable – makes him stand out in a crowd.

“It seems like the Mohawk is what most people know about us,” said McCool. “Everybody’s expecting me to have it now. A lot of fans with Mohawks and kids with Mohawks come over and want pictures with me, and a lot of times when I take pictures with kids (with conventional hairstyles) I’ll hear the kids telling their mom or dad, ‘I wanna get a Mohawk.’ I think that’s pretty cool.”

The origin of McCool’s signature hairdo dates back to January 2008. During the Winter Classic at Columbus (Miss.) Speedway, McCool’s sister, Lindsey, shaved the hair of McCool’s then 4-year-old son, ‘B2,’ into the Mohawk he had been begging for – and moments later, Bub and his father, Johnny, joined in the fun.

“When ‘B2’ was smaller he was wanting to get (a Mohawk) for about six months,” said McCool. “I finally let him do it, and when my little sister started cutting his hair he looked up at my daddy and he said, ‘Paw Paw, I want you and my daddy to get a Mohawk too.’ So that’s kind of how it started. My daddy did it – he’s still got one – and I did it too.”

“The (Winter Classic) rained out the night we got (the Mohawk),” said McCool, “but the next day we raced and got our first win at Columbus after we’d been racing there for like 16 years. The Mohawk kind of had to stick after that.”

McCool has sported a Mohawk for most of the past five years. He’s colored it green, yellow, blue, orange and a combination of blue and orange (a special edition for last year’s WoO LMS awards banquet). Sometimes he’ll spike it out, but usually not when he’s in the midst of racing.

“It don’t take too long to spike it up, but the first time you put that helmet on, it’s over with,” McCool cracked with his hearty laugh.

McCool currently has a bright green tint to his Mohawk, which should make him easy to spot when fans go searching for him on Thursday night at Red River Co-op Speedway. He’s looking forward to visiting with the Canadian fans at the three-eighths-mile oval, which hosted the WoO LMS for the first time one year ago.

“Last year we all ended up getting out of there pretty quick after our race because there was a threat of rain and we worried about getting stuck in the pits,” said McCool. “But that was unusual for us. We always like to hang out after the race and talk with the fans, so we’ll try to make sure we’re there afterwards this year. We’ll meet ’em and even drink a beer with ’em.”

McCool would like to turn his post-race get-together with the locals into a victory celebration. After finishing a solid fourth in last year’s WoO LMS 50-lapper at Red River, he’s confident that he can make a run at the checkered flag.

“I ran pretty good there last year,” said McCool, who currently ranks ninth in the WoO LMS points standings. “I started on back in the feature (10th spot) and passed cars to move up, so it turned out pretty good for us. I liked the place and think we can do a little better this year.”

For more details on the WoO LMS event, including ticket prices, visit the speedway website at www.victorylane.mb.ca or call the RRCS office at 204-582-0527.