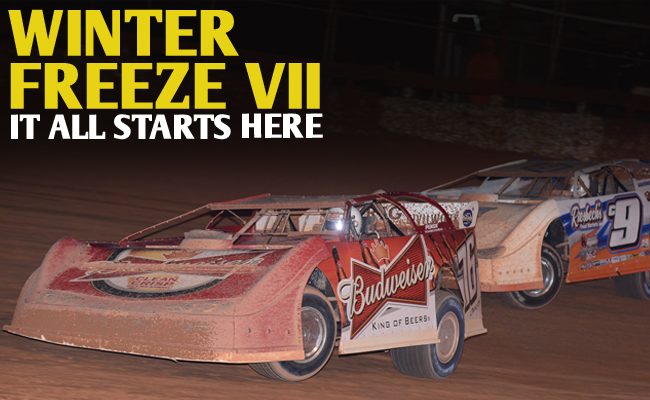 CONCORD, N.C. – February 9, 2017 – The World of Outlaw Craftsman® Late Model Series off-season will officially come to a close on February 17-18 as a new season unfolds in Sylvania, Ga. at Screven Motor Speedway for Winter Freeze VII.

For the past three months drivers and crews have been preparing for the moment when the green flag drops in Georgia. The off-season allows for change and a chance to regroup and recharge before hitting the road again on one of the most gruesome touring schedules out there. The first race of the season sets the stage for the ultimate unveiling of three months of hard work and a chance to get a head start on racking up major points towards the overall Series standings.

For the third year in a row the Series will lift the curtains on the season at the high-banked 3/8-mile red clay oval. The short track has hosted 10 World of Outlaws Craftsman Late Model Series events with the tour’s first visit being in 2008.

The Series trip to Screven started as a late-summer affair in 2008 and 2009 before moving to a springtime date in 2010. After experiencing a rainout in 2011, it sparked the idea to formulate an annual event to take place in February. After seeing the initial success of the event, it was split into two days of back-to-back Outlaw action in 2013. Taking a break from the event in 2014, the series rejoined the action at Winter Freeze in 2015 and the season opener has remained on the schedule ever since.

Of the Series 10 times at Screven, all 10 victories have been claimed by full-time Series drivers. This season there will be 17 Outlaws gunning to keep the podium from the grasps of the local drivers. For the past three Outlaw showdowns at Screven, Georgia native Shane Clanton has appeared in Victory Lane for at least one of the two nights during the event. He is the only driver to win multiple times at the event.

Winter Freeze VII will host a practice session on Thursday, Feb 16, tickets for practice will be $20. Racing will kick off on Friday with $8,000 on the line for the Outlaw event and Saturday with a $10,000-to-win event. All tickets are accompanied by pit pass access for only $40. Tickets are available at Screven Motor Speedway on the day of the event. Gates will open at 10am on Friday and 9am on Saturday.

COMING UP NEXT
The World of Outlaws Craftsman® Late Model Series will invade Volusia Speedway Park (Fla.) for the 46th annual DIRTcar Nationals on Feb. 23-25.