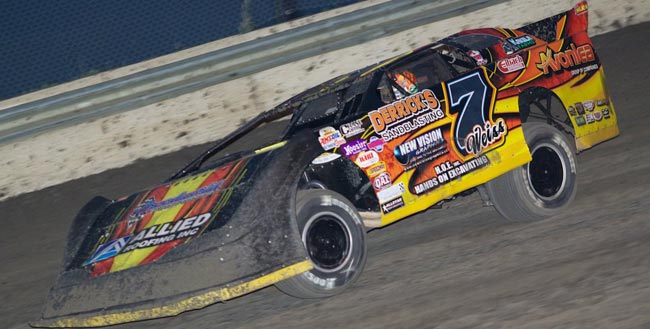 With the touring stars of the World of Outlaws Late Model Series invading his home track for the first time, the 23-year-old Canadian who has won five consecutive Late Model championships at Red River Co-op knows that many local eyes will be focused on his familiar No. 7 to see how he fares.

“We definitely want to show everybody what we can do,” said Weiss, who lives in St. Francois Xavier, Manitoba, about 15 minutes from Red River Co-op. “I know there’s some stiff competition coming up, but we’re ready to give it our best shot.”

Weiss has been the top gun in Red River’s WISSOTA spec-engine Late Model division since he entered the class as an 18-year-old in 2007, but he’s never encountered a field with as much high-profile talent as Thursday’s promises to contain. Former WoO LMS champions Darrell Lanigan of Union, Ky., Rick Eckert of York, Pa., and Tim McCreadie of Watertown, N.Y., and Shane Clanton of Fayetteville, Ga., who pocketed $100,000 for winning last month’s DIRTcar UMP-sanctioned ‘Dream’ at Ohio’s Eldora Speedway, will play lead roles in the renowned circuit’s inaugural event in the province of Manitoba.

“I don’t know if we can beat the best guys in Late Model racing,” said Weiss, “but it’s definitely an advantage when you know the track and what the conditions are gonna do. Hopefully our experience there will work for us.

“Realistically, though, a top-10 finish would be good for me. A top-five, top-three, or a win – that would be a dream come true to do it at your home track in front of everyone who knows you.”

Thursday’s 50-lap, $10,000-to-win WoO LMS event will be the first open-competition Late Model start since January’s Wild West Shootout in Tucson, Ariz., for Weiss, who has focused his 2012 schedule on chasing a third straight WISSOTA Late Model national title. His inactivity in the open-comp realm has led him to seek some assistance from a more experienced hand, Terry Casey of New London, Wis., in one aspect of his preparation.

“The big disadvantage we’ve got is the tires – when to use (certain compounds) and how to cut (sipe/groove) them,” said Weiss, alluding to the open tire rule in effect for the WoO LMS show at Red River Co-op. “Terry Casey is coming up to our shop a day early to kind of help us a bit and get the tires figured out. We’ve been close friends with him for a while, and he’s been great helping us out with stuff like tires.

“As long as he kind of points me in the right direction with tires, I think we’ll be in good shape at Winnipeg (Red River Co-op). I know the track, what it’s gonna do and how to set my car up, so if we can get the tires right we should be pretty good.

“We’re pretty excited about Thursday,” he added. “We put together a new (Victory Circle chassis) car earlier this year and we’re going to run it in the Outlaw show. This car works really good on the dry stuff, and when Winnipeg gets dry it gets really slick, so hopefully knowing the track works to our advantage.”

Make no mistake – Weiss knows Red River Co-op Speedway inside and out. In fact, in 2003 his father, Derek, purchased the track – then called Victory Lane Speedway –and completely refurbished it with new grandstands, lighting and other amenities. The elder Weiss operated the facility for several years before leasing and eventually selling it to car dealer Walt Morris.

While his father no longer owns the track, Weiss is no less enthused about his hometown speedway. He sees Thursday’s arrival of the WoO LMS as another major step for the track.

“We used to run there about half a dozen times a year with the Late Model, but for the past two years we’ve been running there every week,” said Weiss. “They’re slowly trying more and more to get Late Models to come to Winnipeg, and now with this big race hopefully we’ll get a good car count and really show off the Late Model division to the fans.

“We’ve been pushing the race big time,” he continued. “(Track officials) gave us a discount for our Late Model group to sell tickets for the World of Outlaws show, and me and my dad have sold about 80. Another driver sold 100, and there’s about a dozen weekly drivers who have sold about 30 to 40 each. That’s on top of all the advance tickets the track has sold.

“There’s a lot of talk about the race, a lot of excitement. I think it’s gonna be huge and will be good for the track and good for the fans.”

Thursday’s program will kick off three straight nights of WoO LMS competition for Weiss, who plans to enter his Pro Power engine-equipped machine in subsequent World of Outlaws shows on Friday (July 13) at River Cities and Saturday (July 14) at North Central Speedway in Brainerd, Minn. He hopes to use the tripleheader as a springboard to running more open-competition Late Model events in 2013.

Weiss has gotten a taste of WoO LMS action over the past five years, entering 11 tour events, including the annual World of Outlaws race at River Cities Speedway in Grand Forks, N.D. – Weiss’s Friday-night home in recent seasons – and two February trips to Volusia Speedway Park in Barberville, Fla. He hasn’t registered a top-10 finish in eight A-Main starts, but in 2008 he did set fast time at River Cities at the age of 19.

For more details on the WoO LMS event, including ticket prices, visit the speedway website at www.victorylane.mb.ca or call the RRCS office at 204-582-0527.