‘Teletubbies’ At The PEAK WF 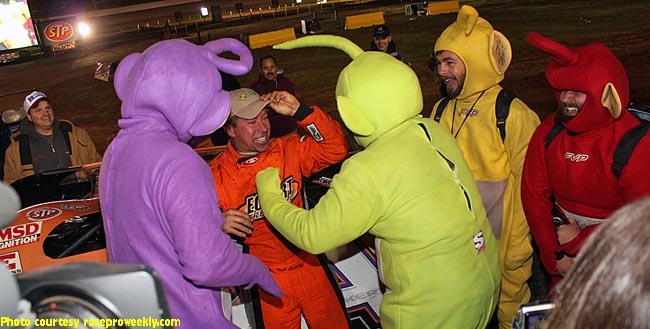 There Will Be No Missing Four Costumed Buddies From Central Pennsylvania On Last Night Of Nov. 1-3 Weekend

CONCORD, NC – Oct. 28, 2012 – Thousands of race fans from all over the globe will enjoy the PEAK Motor Oil World of Outlaws World Finals Presented by NAPA Auto Parts on Nov. 1-3 at The Dirt Track at Charlotte.

But it’s likely that none will have more fun – and be more recognizable – than four buddies from central Pennsylvania.

A Keystone State quartet plan to add some unique flair to their viewing of the Saturday-night (Nov. 3) finale of the PEAK World Finals Presented by NAPA, which features the World of Outlaws Late Model Series, WoO Sprint Car Series and Super DIRTcar Series big-block Modifieds. They will come dressed for the action not in shirts and jackets of their favorite drivers but wearing colorful Teletubbies costumes.

Yes, four big-time race fans will be prowling around The Dirt Track as quirky characters from an old British BBC television series for pre-schoolers. As one of the Teletubby impersonators, Dale Sipe of York, Pa., said, “You don’t see that every time you go to the races.”

Sipe, a personable 30-year-old construction worker who attends the weekly Sprint Car programs at Williams Grove Speedway in Mechanicsburg, Pa., has never missed a PEAK World Finals Presented by NAPA since its birth in 2007. Last year’s edition was the first that he watched in a Teletubby outfit, however, and the reaction he and his cohorts received made it obvious that they couldn’t wear civilian clothes all weekend ever again.

“We like to have fun at the races so last year we decided to get some costumes and have a good time,” said Sipe, who grew up watching his father, Smokey Frye, drive a dirt Late Model at the now-closed Silver Spring Speedway in Mechanicsburg, Pa., and other tracks. “You knew everybody was gonna get a laugh out of it and they definitely did.”

Indeed, Sipe and his fellow 2011 Teletubbies – his brother Bryan Sipe, 23, of York, Pa.; Brad Weirich, 25, also of York; and Jake Small, 30, of Belleville, Pa. – attracted attention as soon as they donned their puffy costumes.

“It was amazing,” said Dale Sipe. “We stayed in a hotel last year, so we dressed up and drove to the track and people were laughing when they looked over and saw us as we were going down the road. Then when we pulled in (at The Dirt Track), it was nothing but pictures our whole way into the track. It seemed like everybody was stopping us.

“And when we walked around the corner into the stands, the crowd saw us and just went nuts. I think this year we’re gonna get just as big of an applause because they’re gonna be looking for us now.”

The faux Teletubbies even joined last year’s raucous PEAK World Finals Presented by NAPA post-race celebration for their York, Pa., homeboy Rick Eckert, who won the WoO LMS championship for the first time after Josh Richards of Shinnston, W.Va., slowed with a flat tire on the final lap of the tour’s weekend-ending 50-lap A-Main. They swarmed Eckert in front of the SPEED television cameras and at the end of Eckert’s video interview for WorldofOutlaws.com, and they were invited to pose for photos with the champ.

“That was awesome, just unreal,” Dale Sipe said of Eckert’s emotional title-winning moment. “We knew how close the points were (as the race wound down) and we could tell the way Richards was running that his tire was getting close to blowing. We were just praying that it would go because he had Rick covered for the championship. Finally, on the last lap, I remember my brother looked over and happened to see (Richards) get out of control a little bit (due to a flat) and we went nuts.”

The Sipe brothers and Small also attended a championship party at Eckert’s shop last November. They came without their Teletubbies costumes, but that was unacceptable.

“When we got there Rick’s wife, Kristal, asked us where our costumes were,” remembered Dale Sipe. “We ran back to the house quick and got them, and then we put ’em on for everybody.”

On Saturday night at The Dirt Track, Dale Sipe will be the green Teletubby, aka ‘Dipsy.’ His younger brother, who works at an auto body shop, will be the red character (‘Po’). The currently unemployed Small (“he calls himself a stay-at-home son,” joked Dale Sipe) will wear the yellow costume (‘Laa-Laa’), and Russell Haller, a 22-year-old Anheuser-Busch employee from East Berlin, Pa., will replace Weirich as the purple Teletubby (‘Tinky Winky’). Bryan Sipe will make his fifth visit to Charlotte for the PEAK World Finals Presented by NAPA, Small his fourth and Haller his first.

The ‘Teletubbies’ will be among a group of 15 racing pals from Williams Grove Speedway’s famed turn-three ‘Beer Hill’ spectator area making the trip to Charlotte. They plan to camp throughout the event outside turns three and four of Charlotte Motor Speedway across the street from The Dirt Track and watch the races from high above the first turn.

“We usually just stand at the very top of the grandstand in turn one,” said Dale Sipe, who attended this year’s WoO LMS Firecracker 100 at Lernerville Speedway in Sarver, Pa. – without his Teletubby outfit – and combined with Dan Stone to win the Saturday driver/fan Cornhole Tournament. “We have seats, but being that we watch from Beer Hill at the Grove, we stand all the time at the races. So we just go up there (at The Dirt Track) and stand like it’s our own little Beer Hill.”

For Sipe and Co., the PEAK World Finals Presented by NAPA is a sheer delight – whether they’re in Teletubby costumes or jeans.

“As a race fan, it sucks it’s only once a year,” said Sipe, whose only other race in his Teletubby regalia this year was May’s WoO Sprint Car show at Williams Grove. “It’s kind of a shame when it comes up because it reminds us that it’s the end of the season. After a party like that, you don’t want the season to end.

“But really, it’s a great way to end the year. It has everything a fan could ask for. We like Sprints and Late Models because that’s what we watch the most, but we like going down there and seeing the (big-block) Modifieds and watching T-Mac (WoO LMS regular Tim McCreadie of Watertown, N.Y.) win.”

And of course, everyone will like seeing Pennsy’s Teletubbies as well. Stickers of their smiling Teletubby faces might even be plastered on the No. 51 Sprint Car of Paul McMahan, the California racer who has been adopted as the clan’s favorite driver.

“I guess we’re in for the long haul now,” said Sipe, who has contemplated new character costume ideas for future PEAK World Finals Presented by NAPA. He paused, and then added with a smile, “We’re gunning for Lugnut (Charlotte’s mascot).”