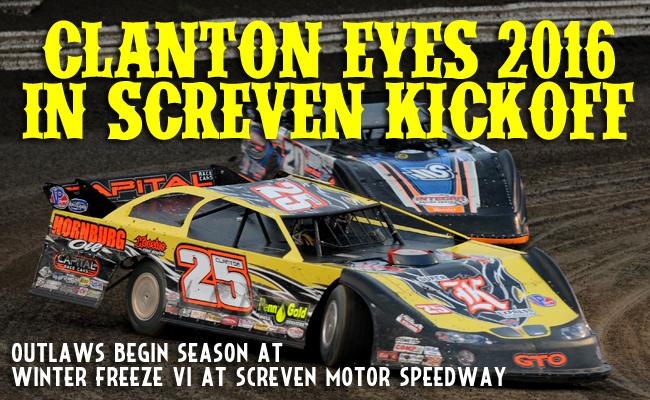 CONCORD, N.C. – Jan. 22, 2016 – Shane Clanton, like other drivers in the pits, began the 2015 World of Outlaws Late Model Series season with high hopes of hoisting the championship trophy for the first time in his career. Ten wins, 34 top-fives and 37 top-tens later, Clanton capped off his phenomenal year by doing what he set out to do when he captured his first series title at the Bad Boy Buggies World Finals at The Dirt Track at Charlotte.

The 40-year-old driver led the championship standings from start to finish last year after starting the season with a bang by scoring a victory on the second night at Screven Motor Speedway in Sylvania, Ga. He then dominatedall three nights of the DIRTcar Nationals at Volusia Speedway Park in Barberville, Fla.

“[Winning the championship] means a lot. It’s one of those deals I can check off my bucket list,” said Clanton, who became the first driver not named Josh Richards or Darrell Lanigan to win the series title since Rick Eckert did so in 2011. “I’ve been after it a long time and to finally get one feels pretty good.”

Fast forward two months. With just weeks remaining before the series makes its return to the season opener at Screven’s Winter Freeze VI on Feb. 12 and 13, Clanton has a different goal this year. He starts the season looking to become the first driver since Richards in 2009 and 2010 to repeat as series champion.

“We’ve been rebuilding and trying to get ready for another grueling season with the World of Outlaws,” Clanton said. “As much as I am at home, it doesn’t seem like I get much time here.”

Unlike most sports, drivers in the World of Outlaws Late Model Series only have a few months to prepare for the upcoming season and enjoy their time off. Most drivers, like Clanton, choose to continue racing in the offseason to keep their programs in top shape in order to make a run for the championship.

With an all-star cast set to invade Screven and compete with the World of Outlaws Late Model Series full-time in 2016, Clanton will have his hands full as he seeks to accomplish his goal and repeat as series champion.