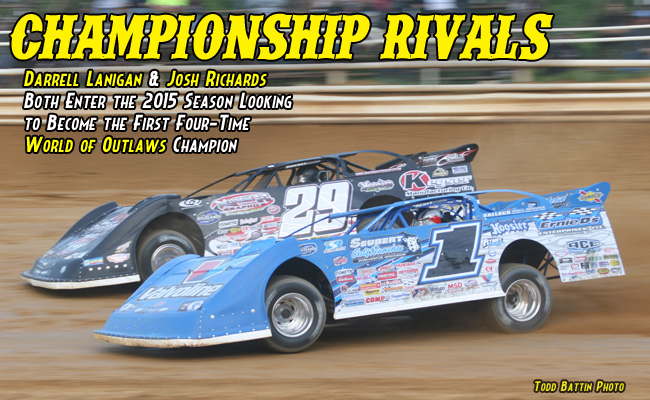 Rivalry Renewed: Lanigan & Richards Set To Face Off In 2015 As Richards Returns To Full-Time World of Outlaws Competition

CONCORD, N.C. – Jan. 27, 2015 – Josh Richards has no doubt that he’s capable of claiming his fourth World of Outlaws Late Model Series championship in 2015. Darrell Lanigan is going to do everything in his power to keep that from happening and claim his own fourth WoO LMS title.

The two superstar drivers who have together dominated the series for much of the past seven years will renew their rivalry this season as Richards returns to full-time WoO LMS competition after sitting out nearly all of 2014 for medical reasons. Both Lanigan and Richards will begin their quests to become the national tour’s first four-time champion with seven series events in Georgia and Florida between Feb. 6 and Feb. 21.

Even after missing all but the final two races on last year’s WoO LMS, Richards, 26, of Shinnston, W.Va., is confident that he’s ready to return to the top of the series in his first year back. But to do that he knows he’ll likely have to overcome Lanigan, the 44-year-old Union, Ky., driver who dominated the tour in Richards’ absence last season with a record-breaking 17 victories en route to his third series title.

“I feel like right now he definitely has the upperhand,” said Richards, whose 49 career WoO LMS victories trails only Lanigan’s 70 career wins. “Missing a whole year like I did, we’re at somewhat of a disadvantage, but at the same time we expect to always perform at a high level. I know we’ll be fine; I know what to expect; I expect to win races and contend for the championship.”

If odds were set on favorites to claim the 2015 WoO LMS title, there’s little doubt that Lanigan and Richards would top the list in some order. The two drivers have been the crème of the crop on tour for more than a half-decade in combining to win six of the last seven WoO LMS championships dating back to 2008 (the only other driver to win a series title during that span was Rick Eckert in 2011, when Richards was in position to win the championship until suffering a flat tire late in the season finale).

Even with Richards missing the majority of two seasons (along with missing most of 2014, Richards also only entered 13 races in 2012 while focusing on opportunities in pavement racing), he and Lanigan have combined to win a whopping 105 A-Mains out of the 282 contested since the beginning of the 2008 season. In the five years he’s competed full time on tour since 2008, Richards has never finished outside of the top two in the championship chase, while Lanigan has never finished worse than third over those seven years.

But before last year, neither Lanigan nor Richards had a season quite like Lanigan’s 2014 campaign. The veteran racer was virtually unstoppable on tour in racking up 17 A-Main wins to break his own single-season win record of 15 victories set in 2012.

While Richards is impressed by Lanigan’s phenomenal season, he’s excited for the chance to foil Lanigan’s dominance by having his own great campaign in 2015.

“Last year I wasn’t there to be a factor, but I feel like we definitely would’ve made it tougher,” Richards said. “You never know, he still could’ve won the same amount of races if I had been there, but I’d like to think we would’ve won a few of those. But if someone’s running well like that, I’m glad for them. That just means that I have to work harder and try to have an even better year myself.”

Lanigan, meanwhile, is looking forward to welcoming Richards back on tour. But his return won’t change Lanigan’s approach.

“It’ll be great for the series and for the fans having him back,” said Lanigan, a regular on the WoO LMS since 2004. “They want to see good racing, and I’m sure Josh definitely adds some excitement. I’m looking forward to it. He’s a good competitor.

“Everyone knows Josh will be right back in the hunt, but you’ve got to get up on the wheel and get it done no matter who you’re racing against. Out there, everyone is just another competitor to me and I’m just trying to win races and win another championship.”

Like Lanigan, Richards says he tends to focus on his own performance rather than aiming to beat any single competitor, but he knows he’ll have to be at his best if Lanigan even comes close to matching his success of last year.

“I don’t like to get caught up in any drama or keep up with statistics; I just like to go out and race hard no matter who I’m racing against,” Richards said. “But with the way Darrell ran last year, yeah, we know he’ll probably be one of the guys to beat – like always.”

There’s another aspect to the Lanigan-Richards rivalry that goes beyond the two drivers. With Lanigan’s 2014 success coming in his new Club 29 Race Car, he helped dethron Rocket Chassis as the leading chassis brand on the WoO LMS. Rocket, which Richards’ father Mark co-owns, claimed the tour’s Chassis Builder of the Year Award every season since the WoO LMS modern era began in 2004.

As the Rocket house car driver and the son of the company’s cofounder, Richards understands the importance of his race team performing well: winning races and winning championships helps Rocket maintain its status among the sport’s elite chassis brands. He hopes to lead Rocket’s campaign to reclaim the status as the tour’s top performing chassis this season.

“People look at me and us as a team and they see Rocket Chassis,” Richards said. “Without a doubt we definitely want them to see us winning races and winning championships.

“I’ve always had the pressure (of representing Rocket); it’s not anything new because it’s always been there in our situation. I’m just excited to get back at it and try to get everything back to where we’re used to it being both for me and Rocket.”

Lanigan, meanwhile, hopes to keep Club 29 at the top as he continues to expand his business at a near unbelievable rate.

“It’s definitely started out well,” said Lanigan, who launched Club 29 with renowned crew chief and car builder Ronnie Stuckey during the 2013-2014 offseason. “It’s probably twice as busy as I ever thought we would be. We built like 60 cars last year and the way it’s going it looks like we’ll do at least that or more this year. I’m sure us running like we have and winning races is a big plus for that, so hopefully we can keep it up.”

While it remains to be seen whether Lanigan or Richards or another one of the formidable WoO LMS regulars will rule the national tour in 2015, one thing is for sure: both Richards and Lanigan believe they have what it takes to win the series championship and in doing so become the first four-time series champion in WoO LMS history.

Having ran just a handful of races over the past year and some odd months, Richards is anxious to begin his bid for a fourth title when the tour launches its season-opening stretch of action in February.

“I’m beyond ready,” Richards said. “Our goal is to win the championship as it always is and to win races. But for me, I just want to be able to get back and be able to compete. I know I can get dialed in and get back in the rhythm of things. I just need to get some laps under my belt. Without a doubt I’m ready to get down (to Georgia and Florida) and get started.”

With his eyes set on another record-breaking performance, Lanigan is also ready to get the 2015 season underway.

“I honestly think we can go out and win another 17 races or even more,” Lanigan said. “If I didn’t think I could, I wouldn’t go out there. Last year definitely was a phenomenal year, but we’re going out again trying to break that record. We go to every race trying to win and that’s not going to change. We’ll keep doing that and try to break the record again.”

Richards and Lanigan will join the rest of the World of Outlaws Late Model Series regulars and a number of new series hopefuls in opening the 2015 season with seven events in Georgia and Florida between Feb. 6 and Feb. 21. Screven Motor Speedway in Sylvania, Ga., kicks things off with two WoO LMS events during the Winter Freeze Feb. 6-7. Both events feature complete WoO LMS programs of time trials, heat races, last-chance races and $10,000-to-win A-Mains. More information about the Winter Freeze is available online at www.screvenmotorsports.com or by calling the track at 912-857-4884.