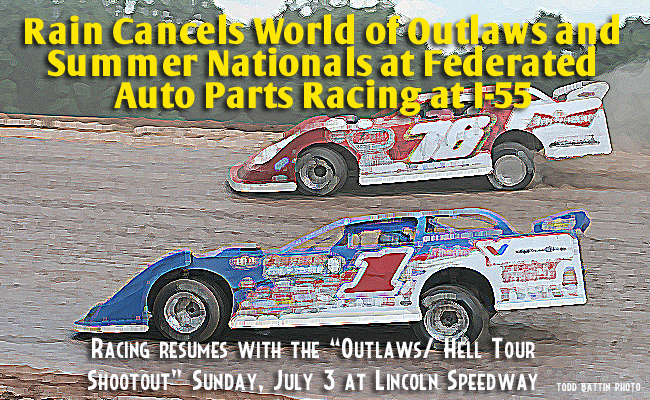 PEVELY, Mo. – July 2, 2016 – Heavy belts of rain and thunderstorms moving through the region Saturday has cancelled the World of Outlaws Craftsman® Late Model Series and DIRTcar Summer Nationals event at Federated Auto Parts Raceway at I-55 in Pevely, Mo. There will be no makeup date for the cancellation.

Also cancelled was the DIRTcar Summit Racing Equipment Modified Nationals, which were scheduled to join the Outlaws and Summer Nationals on Saturday.

With unfavorable conditions set to hit the track by early- afternoon, track and series officials agreed to not carry on with the program. The Outlaws were scheduled to duel with the DIRTcar Summer Nationals late models. The combination of both series into one show was to be the first in history.

“We always make decisions in the best interest for our drivers and the fans,” Christman said. “This stinks. There were a lot of fans looking forward to seeing the Outlaws take on the Summer Nationals guys. I know our drivers were excited. Hopefully we get the chance at Lincoln tomorrow.”

The two tours will clash for the “World of Outlaws/ Hell Tour Shootout” presented by Graue Chevrolet Sunday, July 3 at Lincoln Speedway in Lincoln Ill. This will be the biggest event in the track’s 13-year history. Hot laps are scheduled for 5:30 p.m. CT and racing will begin at 6:30 p.m.