Racing In His Backyard 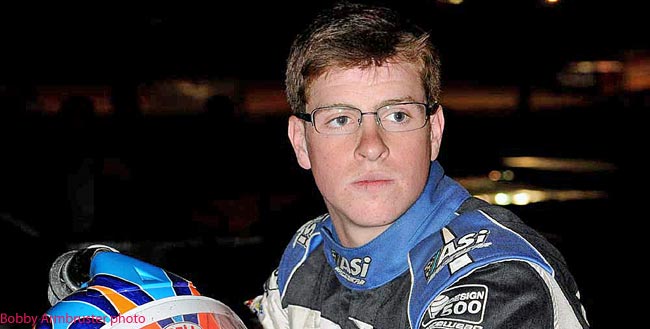 DELMAR, DE – May 10, 2011 – When Austin Hubbard is on the road with the World of Outlaws Late Model Series, he’s one of the country’s hottest young racing talents. But when he’s back home in Delaware, he’s just one of the guys.

On Thursday night (May 12), Hubbard’s worlds will collide when the renowned World of Outlaws tour visits his home-state track, Delaware International Speedway, for the Fulton Bank 50.

Hubbard, 19, will straddle the line between his dual lives – rising dirt Late Model star and regular, goofy teenager from Seaford, Del. – during the $10,000-to-win mid-week spectacular. He lives barely 10 miles from the half-mile oval, which hosts the WoO LMS for the fifth straight season and seventh time in the last eight years.

“It’s nice to come home once a year and race a World of Outlaws show,” said Hubbard, who currently ranks third in the WoO LMS points standings after winning the tour’s Rookie of the Year award in 2010. “After traveling all over the country, it’s cool to have a chance to hang out with the people I always have, drive down the road and race in front of my family and everybody I know, and then go back and sleep in my own bed.

“Running a big race at Delmar (Delaware International) kind of takes me back a little bit. I realize how far we’ve come.”

Indeed, Hubbard’s advance to the full-fender division’s highest rung has been meteoric. It wasn’t all that long ago that he was a toddler who spent every Saturday night in Delaware International’s drive-in area outside turn one, watching his father Mike’s big-block Modified in action and telling everyone who would listen that he could drive one of the track’s little Mod Lite cars.

By the age of five Hubbard was beginning to travel far-and-wide to race go-karts, but he was still a frequent spectator at DIS and developed a love for the dirt Late Model division. The fact that he’s now driving the high-profile Dale Beitler-owned Rocket No. 19 – a car he remembers seeing Pennsylvania’s Gary Stuhler, among others, run in special events at Delaware – simply blows his mind.

“When I was a little kid watching races at Delmar,” said Hubbard, “I could’ve never imagined running in a big race there, let alone driving Dale’s car in it. I mean, it’s really weird – only a few years ago I was going on-line and ordering all the Late Model skins for the dirt-track racing (video) game. My cars were always (number) 1-star because Chub Frank was like my hero. Now here I am running Dale’s car against Chub and Rick Eckert and everybody else with the Outlaws.

“I’m just so happy to be lucky enough to do what I’m doing. This is a dream come true.”

Hubbard is blazing new trails on the WoO LMS, not only with his quick success (his two A-Mains wins last year set a rookie-racer record) but also by becoming the first driver from the state of Delaware to follow the tour as a regular. The ascent has amazed Hubbard’s father, who fielded his son’s equipment until Austin hooked up with Beitler prior to the 2010 season.

“Maybe being a World of Outlaws driver doesn’t feel far-fetched for someone like Josh (Richards) because he’s Rocket’s kid,” Mike Hubbard said of the two-time defending WoO LMS champion, whose father co-owns the Rocket Chassis business in Shinnston, W.Va. “But when your father’s a stupid trucking company owner and sign-painting/lettering guy, making it to the World of Outlaws definitely still seemed far-fetched to me and Austin a few years ago.

“We’re ecstatic he is in this position. The only thing that sucks is that we can’t be on the road watching him run every World of Outlaws race. We gotta be back here (in Delaware) taking care of business.”

The elder Hubbard can see his boy on Thursday night, however. And while Austin has never been a regular at DIS, he has one feature win (as a 15-year-old in 2007) among his dozen-or-so career starts there.

Hubbard is still searching for his first victory of 2011 on the WoO LMS. There would be no better place for him to break through than Delaware, where his WoO LMS A-Main finishes include a fourth in 2010, 17th in 2009 and 21st in 2007.

Despite the added pressure of performing in front of so many family members, friends and local fans, Hubbard has pledged to remain focused on the task at hand on Thursday night. He’ll face off with a star-studded field featuring former WoO LMS champions Richards (last year’s winner at DIS), Darrell Lanigan of Union, Ky. (DIS victor in 2005 and 2008) and Tim McCreadie of Watertown, N.Y., as well as points leader Rick Eckert of York, Pa., 2007 DIS winner Chub Frank of Bear Lake, Pa., and standout challengers such as Jason Covert of York Haven, Pa., Jeremy Miller of Gettysburg, Pa., and DIS regular Richard Jarvis Jr. of Ocean Pines, Md., who beat Hubbard to win the track’s season opener last month.

“This year I’m trying to concentrate on treating every race the same,” said Hubbard. “It’s gonna be cool to have everybody there, but we’re coming there with the same goal, and that’s to win. That’s what’s most important.

“A World of Outlaws win at Delmar would mean a lot. That’s definitely one of the notches I want to get on my belt. It would be an awesome accomplishment.”

And how would Hubbard celebrate if he pulls off a triumph? Well, he would definitely be hyped up.

“I might just run home,” said Hubbard, who gained national acclaim with his Ricky Bobby-in-Talladega Nights celebratory run down the homestretch after his first-ever WoO LMS win last year at Georgia’s Screven Motor Speedway. “I probably wouldn’t be able to stop running.”

Delaware International Speedway’s gates are scheduled to open at 4 p.m. on Thurs., May 12, with hot laps set to begin at 7 p.m. Time trials and heat-racing will follow.