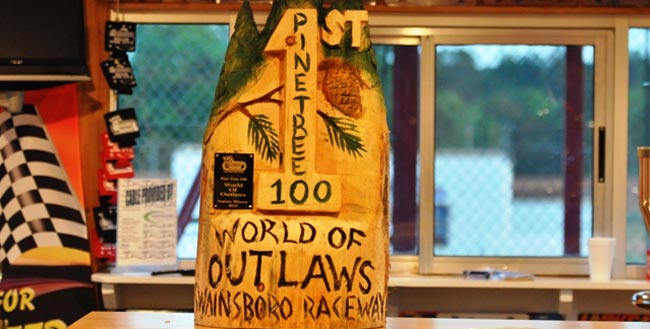 SWAINSBORO, GA – May 3, 2012 – A $10,000 first-place prize will be the primary motivator for drivers competing in the World of Outlaws Late Model Series portion of the ‘Pine Tree 100’ this Saturday night (May 5) at Swainsboro Raceway.

But on this evening, at least, the racers will also have more than a passing interest in claiming the trophy that Swainsboro promoter Paul Purvis will present to the winner of the 50-lap A-Main.

For the third straight year, Purvis has commissioned the ‘Masters of the Chainsaw’ – a group of the nation’s top professional chainsaw sculptors – to create a one-of-a-kind trophy for the WoO LMS victor at his three-eighths-mile oval. Playing off the 67th annual Pine Tree Festival that runs from April 28-May 5 in downtown Swainsboro, the keepsake is carved out of pine-tree wood using only a chainsaw.

“Two years ago, when we brought the World of Outlaws to Swainsboro for the first time during the Pine Tree Festival, we thought that it would be pretty neat if we could come up with some sort of different trophy to give to the winner,” said the 50-year-old Purvis, a former racer who is in his 11th full season at the helm of Swainsboro Raceway. “When we saw the ‘Masters of the Chainsaw’ group doing a show at the Festival, we asked them if they could make something and they said, ‘Sure.’

“Everybody seemed to like (the finished product), so we’ve made it an annual deal now. We even get smaller ones made up to give to the winners of our support classes.”

This year Purvis had to go to greater lengths to ensure the continuation of Swainsboro’s building wooden-trophy tradition. In each of the past two years a ‘Masters of the Chainsaw’ sculptor actually carved the trophies during the Festival, but the group isn’t part of the affair’s entertainment schedule this year so Purvis had to arrange for the carvings to be done in advance and he picked them up in Atlanta.

The 2012 version of the WoO LMS ‘Pine Tree 100’ trophy will have a slightly different look from past incarnations. It features a pointed top painted pine-tree green with a prominent sculpted ‘1st’ and the words ‘World of Outlaws – Swainsboro Raceway’ painted on its base.

Both McCreadie, 38, and Eckert, 46, have given their Pine Tree trophies a prominent place in their personal collections of racing hardware. With both drivers putting up prolific win totals during their careers, they don’t have the desire nor the space to display run-of-the-mill awards.

“I don’t keep a lot of trophies, but that’s one I’ve kept,” McCreadie said of his Swainsboro momento. “You never win as much money as you’d like, so it’s nice to have a cool trophy.”

McCreadie has his Swainsboro carving on display in his home’s finished basement alongside his most cherished trophies, including those he received for winning the WoO LMS championship, the Knoxville Late Model Nationals, the Topless 100, the Chili Bowl Midget Nationals and milestone Super DIRTcar Series events (first 358 tour victory in ’96, first Big-Block series triumph in ’99).

Eckert, meanwhile, has his Swainsboro sculpture positioned in the office area of his team’s racing shop. He’s moved virtually all his racing paraphernalia from his home to the shop because when he’s at his residence he likes to “quit thinking about racing and get away from it for a little while.”

“I only keep a couple of cool trophies, ones that are unique or for real memorable wins,” said Eckert. “If it’s just a regular trophy, I’ll usually give it to a kid because it’ll mean a lot to them.

“I have the Swainsboro trophy in the shop with the bull-horns trophy from Texas (his WoO LMS victory at Battleground Speedway in 2010), my World of Outlaws and UDTRA championship trophies, my Dirt Track World Championship trophy, some cool eagles I got for winning a couple races at Virginia Motor (Speedway), and the gold man I got for the EMPA (Eastern Motorsport Press Association) Driver of the Year (in 2011).”

Eckert figures to be a favorite to collect another Swainsboro wood carving this Saturday night. He enters the events ranked second in the WoO LMS points standings with one win already to his credit this season.

“Last year we came into Swainsboro second in the points and took the lead with the win,” recalled Eckert. “We led the points the rest of the season, so hopefully we can do the same thing again.”

McCreadie is hoping that Swainsboro will help turn around his struggling fortunes. He has yet to record a top-five finish on the tour this season and ranks eighth in the points, but Swainsboro has been good to him with a victory in ’10 and a fifth-place finish last season.

Other WoO LMS regulars who ran strong at Swainsboro the past two years include current points leader Darrell Lanigan of Union, Ky. (second in ’10, third in ’11); Chub Frank of Bear Lake, Pa. (second in ’11); Vic Coffey of Caledonia, N.Y. (fourth in ’11); Shane Clanton of Fayetteville, Ga. (sixth in ’11); and Clint Smith of Senoia, Ga. (seventh in ’11).

Swainsboro Raceway’s WoO LMS event on Saturday night will serve as the grand finale for three full days of activities that comprise the town of Swainsboro’s annual Pine Tree Festival, which includes a Saturday-morning parade through the downtown streets. Several race cars as well as the track’s pace truck and ‘Fan Tram’ – carrying the reigning Swainsboro champions – will be part of the parade.

The speedway’s pit gates are scheduled to open at 12 noon and the grandstands will be unlocked at 3 p.m. Practice is set to start at 6 p.m., followed by qualifying at 7 p.m. and racing at 8 p.m.

The facility’s Mud Bog will also be in operation on Saturday starting at 6 p.m.

More info on Swainsboro Raceway’s inaugural WoO LMS event is available by logging on to www.swainsbororaceway.com or calling 478-252-1300.

The WoO LMS will arrive at Swainsboro after competing on Fri., May 4, at 311 Motor Speedway in Pine Hall, N.C.